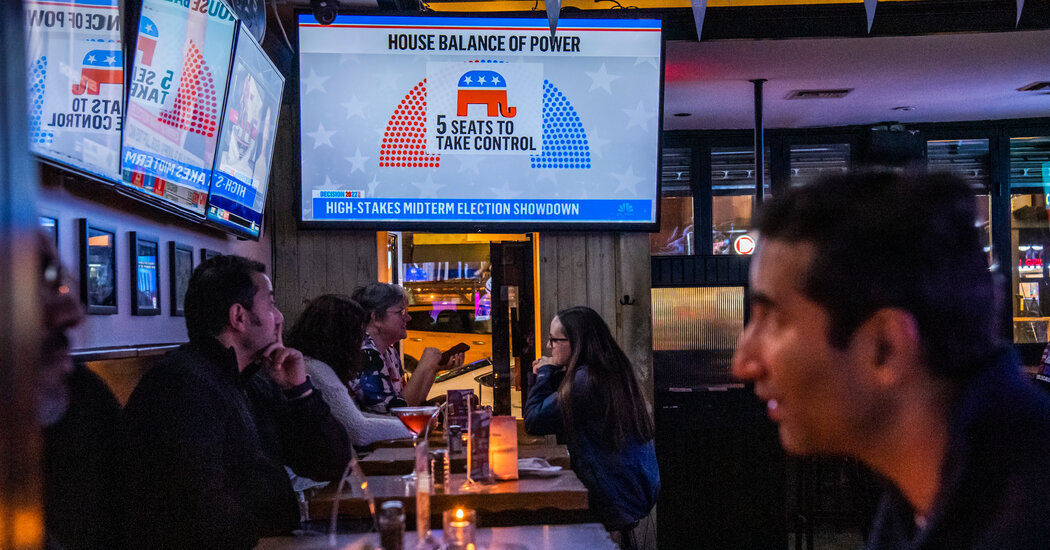 Democrats tried to outrun history — and the lead weight of a wounded president who made his final political appearance of the campaign in deep-blue Maryland, in a county he won two years ago by an overwhelming margin.

They had help from a surprising quarter: Republican voters. A base still in thrall to Donald J. Trump chose candidates in the primaries who threw out plenty of red meat, but on Election Day, many failed to translate their frustrations into victory.

So far, the results appear well short of the “red tsunami” of Republican dreams. Republicans may yet win back the House, but hardly in commanding fashion, while the Senate remained too close to call early Wednesday morning.

Across the East Coast, in Virginia’s northern suburbs and mixed areas of Rhode Island and New Hampshire, embattled Democrats managed to hang on. They even knocked off a few Republicans here and there. In many tight races, abortion and Mr. Trump’s looming presence may have been the G.O.P.’s undoing.

“The Democratic Party post-Trump is a much tougher, fighting party,” said Representative Jamie Raskin, Democrat of Maryland, attributing to sheer grit the victories eked out by colleagues like Abigail Spanberger of Virginia. “These are battle-hardened veterans who know exactly why they’re in politics.”

Tuesday was by no means an unalloyed victory for either side, however. There were signs of Republican gains in working-class communities of color. And some battleground states, like North Carolina, moved further out of Democrats’ reach. Gov. Ron DeSantis, Republican of Florida, even flipped the Democratic stronghold of Miami-Dade County on his way to a rout of Representative Charlie Crist.

It will be days before the full results are clear, and possibly weeks. Here are the lessons of the 2022 midterms so far:

The Democratic base showed up.

The biggest question hanging over Democrats all year was just who, exactly, would show up to vote for them. In a typical midterm election, like 2010 and 2014, turnout drops by about 20 percentage points from a presidential year.

But turnout smashed all records in 2018, when voters repudiated Mr. Trump and Democrats retook the House. So far, preliminary research by the Democratic data firm Catalist suggests that this year looks much more like 2018 than it does the sleepy affairs that took place under former President Barack Obama. Many analysts now think the United States may have reached a new plateau of permanently high participation, stoked by each party’s fear of the other side.

That might help explain why polling failed to capture the widespread feeling among Democrats, which grew after the Supreme Court’s reversal of Roe v. Wade and the Jan. 6 hearings over the summer, that their core Democratic rights were increasingly at risk.

“I think that pundits sometimes project onto the public a crude materialism, where all people care about is pocketbook issues in the narrowest sense,” Mr. Raskin said. “People understand how precarious and precious a thing constitutional democracy is, and they don’t want to lose it.”

Abortion put Democrats in the fight.

Throughout much of 2021 and the first half of 2022, Republicans appeared poised for shellacking-level gains in Congress and beyond. Then came the Supreme Court’s bombshell decision in Dobbs v. Jackson Women’s Health Organization, overturning a 50-year precedent that many Americans had taken for granted.

Suddenly, Democrats had found an issue to rally their base around. Two months later, when voters in conservative Kansas emphatically rejected a ballot measure to ban abortion, many saw a potential game-changer in the making. Democratic governors like Gretchen Whitmer of Michigan positioned themselves as bulwarks of abortion rights, while liberal groups poured hundreds of millions of dollars into ads highlighting the far-right positions many Republicans took to win their primaries.

Some on the left, notably Senator Bernie Sanders of Vermont, have questioned whether Democrats expended too much energy on abortion. The unintended effect, these critics argued, was to reinforce the impression that Democrats were ignoring the most pressing concern on voters’ minds: inflation.

Often, Democrats got the opponents they desired. And the Republican Party leadership was just as often confounded and frustrated by the choices its own voters made.

G.O.P. leaders aggressively courted centrist governors like Doug Ducey of Arizona, Larry Hogan of Maryland and Chris Sununu of New Hampshire to run for Senate — to little avail. Mr. Trump played kingmaker from Mar-a-Lago, demanding that candidates pay fealty to his lies about the 2020 election being stolen. Republican primary voters sided overwhelmingly with Mr. Trump, leading Mitch McConnell, the Senate minority leader, to fret about the “quality” of his party’s nominees.

In some races, Democrats even tried steering Republican voters away from more moderate candidates and lifted Trump-aligned conservatives who denied the legitimacy of Joseph R. Biden Jr.’s 2020 win. Once these nominees were cemented, Democrats bombarded voters with messages that portrayed Republicans as too extreme on issues like abortion rights or as opponents of democracy itself.

The Democrats’ scorched-earth approach worked in many cases. Josh Shapiro, the attorney general of Pennsylvania, ran ads bolstering State Senator Doug Mastriano in the Republican primary, then steamrollered him in the election on Tuesday.

Don Bolduc, a Republican challenger who likewise played up Trump’s stolen-election lies, lost a Senate race in New Hampshire that Republicans in Washington once thought winnable. Gov. Tony Evers of Wisconsin, wryly assessing his victory over Tim Michels, a flame-throwing Republican who allied himself with Mr. Trump, remarked that “boring wins.”

Inflation dominated, as Democrats grasped for a response.

Again and again, voters told pollsters that soaring prices for gasoline, groceries and housing were their No. 1 concern by far. And Democrats grasped for a clear, consistent response to Republican attacks.

The White House first tried denial: Administration officials argued that inflation was a “transitory” phenomenon, a word that would come to haunt many a Democrat months later. Then blame: When Russia’s invasion of Ukraine sent oil prices rocketing upward, Mr. Biden and other Democrats tried to brand inflation as “Putin’s price hike.”

Acceptance proved harder. Some Democrats were more adept than others at feeling voters’ pain; in February, a group of vulnerable senators, for instance, urged Mr. Biden to freeze the federal gas tax. But, on the whole, the public held Democrats responsible for their pinched wallets, regardless of what the party said or did.

Even the Inflation Reduction Act, the product of 18 months of messy talks on Capitol Hill, landed with a whisper. Relatively few Americans were aware of provisions to cap the price of insulin and allow Medicare to negotiate the price of prescription drugs, even though they were individually popular. As Sean McElwee of the progressive polling group Data for Progress put it, “Voters don’t know a ton about the bill or what was in it.”

The country is as closely divided as ever.

The chief force in American politics remains its deep partisan divide. There were indeed some ticket-splitters on Tuesday, but in general Democrats turned out en masse for Democrats, and Republicans for Republicans. In years past, Mr. Biden’s low approval ratings and inflation stuck at 40-year-highs might have augured a convincing drubbing for his party. Harry Truman lost 55 House seats in his first midterms; Bill Clinton lost 53; Barack Obama lost 63.

That kind of rebuke didn’t happen to Mr. Biden. It is rarely how American politics works anymore. There are fewer true swing voters than ever — and a dwindling number of swingable races.

Most of the country’s 435 House seats were not in contention anyway, leaving the two sides to scrap over a battlefield shrunken by gerrymandering and sorted into polarized geographic enclaves. Fewer than a third of this year’s Senate races were ever competitive. Representative Tim Ryan could not escape Ohio’s rightward march despite a campaign Democrats hailed as “phenomenal”; nor could moderate Republicans like Joe O’Dea and Tiffany Smiley pull off upsets in Colorado and Washington State.

Voters re-elected Republican governors in Florida, Georgia and Texas. They returned Democrats to power in Maryland, Massachusetts, Michigan, Minnesota, New York, Pennsylvania and Wisconsin. And for all the record-shattering sums spent on campaigns and TV ads in the 2022 midterms — as much as $16.7 billion, by one estimate — the country is likely waking up on Nov. 9 much as it did on Nov. 8: split roughly in two.

“Nothing really worked this cycle,” said Ms. Greenberg, the Democratic pollster. “There are much larger issues at stake.”