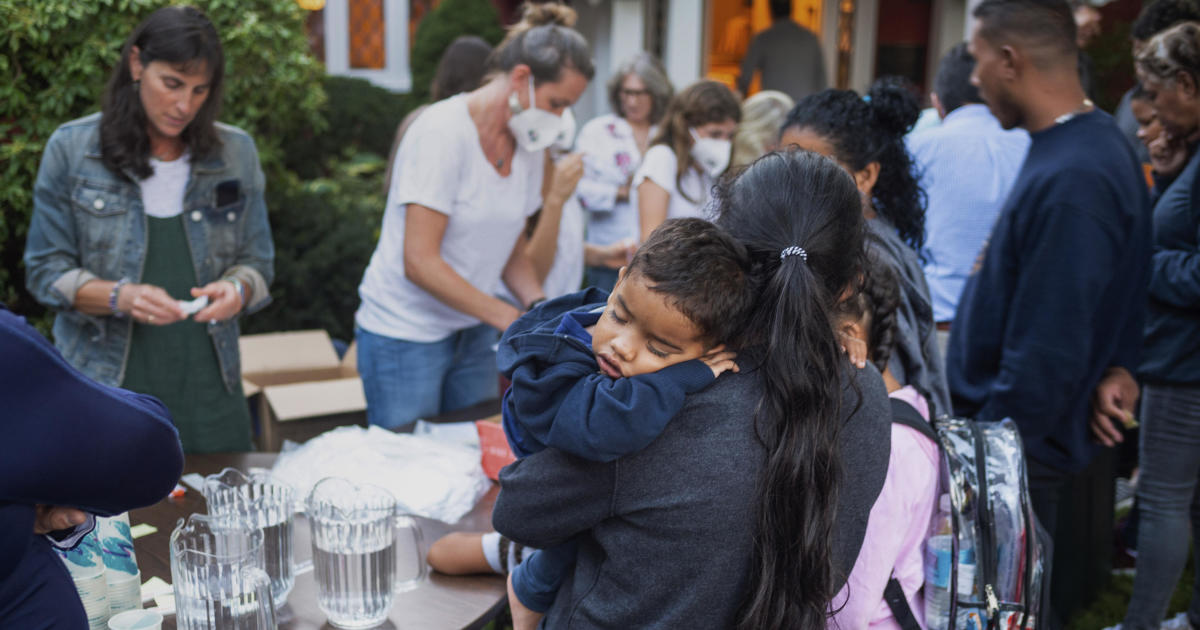 Tallahassee, Florida — Florida Governor Ron DeSantis on Wednesday flew two planes of immigrants to Martha’s Vineyard, escalating a tactic by Republican governors to draw attention to what they consider to be the Biden administration’s failed border policies. Flights to the upscale island enclave in Massachusetts were part of an effort to “transport illegal immigrants to sanctuary destinations,” said Taryn Fenske, DeSantis’ communications director.

While DeSantis’ office didn’t elaborate on their legal status, many migrants who cross the border illegally from Mexico are temporarily shielded from deportation after being freed by U.S. authorities to pursue asylum in immigration courts — as allowed under U.S law and international treaty — or released on humanitarian parole.

Massachusetts’ Gov. Charlie Baker, a Republican, said he was in touch with local officials and that short-term shelter was being provided.

State Rep. Dylan Fernandes, who represents Martha’s Vineyard, tweeted: “Our island jumped into action putting together 50 beds, giving everyone a good meal, providing a play area for the children, making sure people have the healthcare and support they need. We are a community that comes together to support immigrants.”

Martha’s Vineyard’s Island Wide Regional Emergency Management said in a statement Wednesday afternoon that “approximately 50 individuals, to the best of our knowledge originating from Venezuela, landed at the Martha’s Vineyard Airport, seeking shelter.”

“Town Emergency Management Operations from the six Island towns and the Sheriff’s Office, as well as County Management are actively collaborating to develop a coordinated regional response,” the statement said, adding “two emergency shelters have been established at local Island churches, with additional space available in case further arrivals occur.”

The emergency management teams had “reached out to our State and Federal partners for additional and long term support and assistance.”

DeSantis, who is mentioned as a potential presidential candidate, appears to be taking the strategy to a new level by using planes and choosing Martha’s Vineyard, whose harbor towns that are home to about 15,000 people are far less prepared than New York or Washington for large influxes of migrants.

CBS Boston reported that the group of migrants wandered about three and a half miles from the airport to Edgartown, where Barbara Rush, of St. Andrews Church, said “Martha’s Vineyard Community Services had 50 people sort of literally walk up to their front door.”

CBS News immigration reporter Camilo Montoya-Galvez notes that, unlike the other cities Republican governors have chosen as destinations for migrants, Martha’s Vineyard is not an urban, metropolitan area with a robust social services infrastructure: There are no large refugee or migrant services organizations on the island. There’s no Justice Department immigration court where the migrants can attend asylum hearings. There’s no ICE field office where migrants can check in. As it hasn’t been a top destination for recent arrivals, the flights will also raise questions about whether all the migrants transported there on Wednesday knew where they were going.

Regardless, the move is likely to delight DeSantis’ supporters who deride Democrat-led, immigrant-friendly “sanctuary” cities, and anger critics who say he is weaponizing migrants as pawns for political gain.

“History does not look kindly on leaders who treat human beings like cargo, loading them up and sending them a thousand miles away without telling them their destination,” admonished Rep. Bill Keating, a Massachusetts Democrat.

“States like Massachusetts, New York, and California will better facilitate the care of these individuals who they have invited into our country by incentivizing illegal immigration through their designation as ‘sanctuary states’ and support for the Biden Administration’s open border policies,” Fenske said.