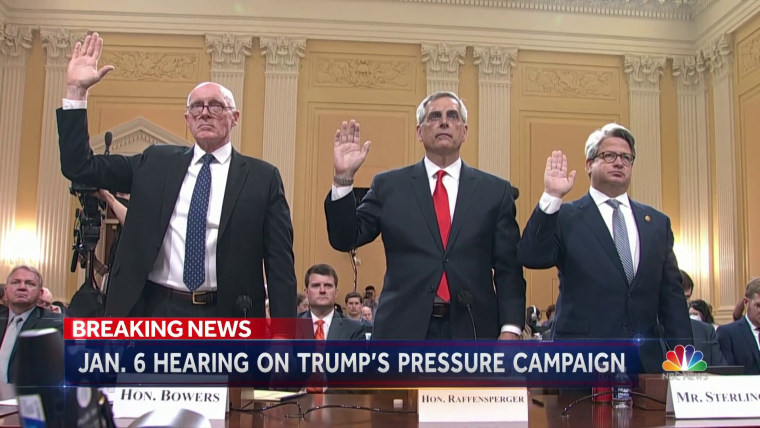 Nearly a dozen of Georgia’s “fake electors” revealed Tuesday they’ve been subpoenaed to appear before the Fulton County special grand jury hearing evidence in the criminal investigation into possible 2020 election interference by former President Donald Trump and his allies.

The revelations came in a court filing where attorneys for 11 of the state’s 16 false presidential electors attempted to quash the subpoenas, calling them “unreasonable and oppressive.”

The attorneys also argued that Fulton County District Attorney Fani Willis’ office initially said their clients were “witnesses, not subjects or targets” of the investigation, and that the electors had agreed to voluntary interviews with the team investigating election interference beginning in April.

NBC News has reached out to the Fulton County District Attorney’s Office for comment.

After the 2020 election, certificates purporting to be from Trump electors were sent to the National Archives in Washington, D.C., by Republicans in seven battleground states that Joe Biden won — Arizona, Georgia, Michigan, Nevada, New Mexico, Pennsylvania and Wisconsin. That effort, which was ultimately unsuccessful, created two sets of electors: an official group selected by the states and the fake ones.

During a public hearing last month, the House Jan. 6 committee presented documents and testimony that appeared to show Trump’s team had plotted to overturn the 2020 election by organizing the slates of alternate “fake electors” in those seven states.

The fake electors submitted false certifications of Trump victories to the National Archives hoping that then-Vice President Mike Pence would swap them for the legitimate electoral votes that solidified Joe Biden’s victory, the panel alleged.

Lawyers for the 11 Georgia electors argued Tuesday that their clients were unaware of any alleged plot by former Trump lawyers John Eastman and Rudy Giuliani to use their votes improperly.

“[T]he nominee electors did not and could not have had any involvement in or knowledge of any such plan, as it was not even conceived until several weeks after the GOP electors had completed their contingent electoral slates on December 14, 2020,” the attorneys wrote. “And, in any event, it was never disclosed to or discussed with the nominee electors at any time.”

“As such, none of the nominee electors could have anticipated on December 14, 2020 that there could or would be any attempt to misuse their lawfully cast contingent electoral slate in such manner, nor did they or could they have participated in the same,” they added.

The attorneys further argued that county prosecutors had changed course in the probe despite cooperation from their clients.

“The abrupt, unsupportable, and public elevation of all eleven nominee electors’ status wrongfully converted them from witnesses who were cooperating voluntarily and prepared to testify in the Grand Jury to persecuted targets of it,” the attorneys said in the court filing.

“The unavoidable conclusion is that the nominee electors’ change of status was not precipitated by new evidence or an honestly-held belief that they have criminal exposure but instead ad improper desire to force them to publicly invoke their rights as, at best, a publicity stunt,” they added.

According to the attorneys, the electors had the right to cast “contingent” electoral votes, drawing similarities between the 2020 actions and those made by Democratic electors in the judicially contested 1960 presidential contest between John F. Kennedy and Richard Nixon.

“There, the contingent, provisional electoral ballots cast by the Kennedy presidential elector were ultimately the ones counted by Congress as Hawaii’s electoral votes,” they argued.

The effort to quash the subpoenas in Fulton County comes as Rep. Jody Hice, R-Ga., a Trump ally, is fighting a similar subpoena to testify in the probe.

The Justice Department said this year that federal prosecutors were looking into the legal ramifications for those involved in the scheme to push slates of fake Electoral College members declaring Trump the winner of states that Biden won.

Zoë Richards is the evening politics reporter for NBC News.

Blayne Alexander is an NBC News correspondent, based in Atlanta.