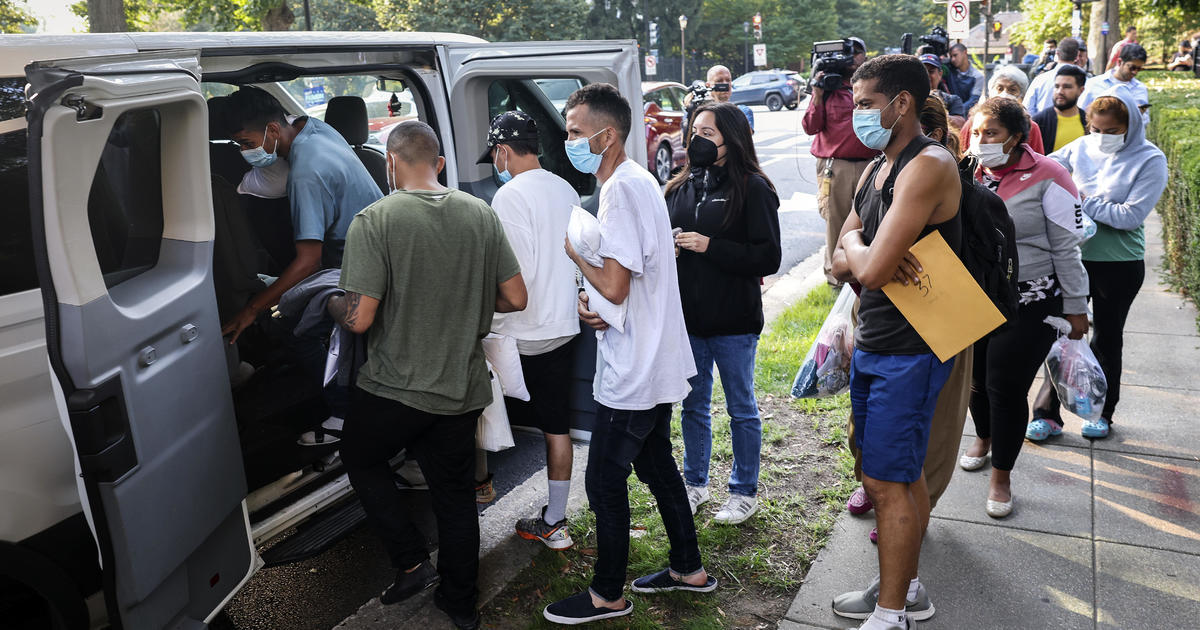 On Wednesday, Florida Gov. Ron DeSantis, a Republican, took credit for flying roughly 50 Venezuelan migrants to Martha’s Vineyard, an island off the Massachusetts coast, without alerting local officials. On Thursday morning, Texas Gov. Greg Abbott boasted about busing another group of migrants to a street near the Naval Observatory, which houses the vice president’s official residence.

The state actions this week are part of a broader campaign by three Republican governors to rebuke the Biden administration’s border strategy through the transportation of thousands of migrants to communities that have adopted so-called “sanctuary” policies, which limit cooperation with federal immigration authorities.

As of Friday, Texas and Arizona had sent at least 295 buses with approximately 13,000 migrants to D.C., New York, and Chicago, all cities with Democratic mayors, according to statistics provided by state representatives.

Most of the buses have been commissioned by Texas, which started its transportation effort to D.C. this spring before expanding it to include New York and Chicago. As of earlier this month, Texas had paid over $12 million to finance the migrant bussing operation, according to the state’s division of emergency management.

Arizona, meanwhile, has transported 1,809 migrants to D.C. on 50 buses, CJ Karamargin, a spokesman for Republican Gov. Doug Ducey, said on Friday. Karamargin said Arizona has paid over $4 million to transport migrants to D.C., noting that each bus costs roughly $83,000 to operate.

While the Democratic mayors of D.C., New York and Chicago have all expressed logistical concerns about their ability to accommodate the migrants transported by Texas and Arizona, their cities, with the help of non-profit organizations, have been able to receive the new arrivals with food, shelter and other services.

But officials in Martha’s Vineyard found themselves scrambling on Wednesday to find shelter, food and other accommodations for the several dozen migrants, including children, who arrived at the island’s small airport. Two churches were converted into makeshift shelters, according to local officials, who implored federal and state authorities for assistance.

Unlike major urban centers, Martha’s Vineyard does not have an immigration court where migrants can attend their asylum hearings or an immigration office where they can check-in to demonstrate their compliance with the terms of their release. The island also lacks large migrant services organizations that help newcomers integrate into local communities.

On Friday, Massachusetts Gov. Charlie Baker, a Republican, said he was considering establishing a makeshift shelter for migrants at Joint Base Cape Cod, a military installation on the U.S. mainland.

“The Commonwealth has many resources for assisting individuals that arrive in Massachusetts with varying immigration statuses and needs and is working with all partners involved to make sure those resources are available to the migrants that arrived last night,” Baker said.

On Thursday morning, two buses off-loaded roughly 100 migrants outside the vice president’s official residence, where they were welcomed by a camera crew from Fox News, which also received video of the migrant arrivals in Martha’s Vineyard. Local volunteers said they were not given prior notice of the operation, which left migrants stranded on nearby sidewalks.

The Department of Homeland Security on Friday said the migrants transported to D.C. were taken to a local church after coordinating with a local non-profit. In a statement, the department criticized Texas for not alerting local officials of the migrant arrivals.

“The Department of Homeland Security works closely with state and local officials on an extremely wide range of issues, including responding to natural disasters, countering terrorism, fighting crime, cybersecurity, and immigration,” it said. “When, however, a state or local government refuses to coordinate with receiving communities, it can wreak havoc and do harm to individuals and those communities. That is the case here.”

Republican state officials have argued their migrant transportation campaign is a way for Democratic-led jurisdictions to share the burden of accommodating migrants, which they say has fallen mostly on small border towns. They have pushed the Biden administration to adopt more hardline border policies to deter migrants from entering the U.S. illegally.

“Our message is, we’re not a sanctuary state,” DeSantis said during a press conference Friday. “We don’t have benefits or any of that. There are some sanctuary jurisdictions, and that would be better. Now, what would be the best is for Biden to do his damn job and secure the border.”

But advocates for asylum-seekers and Democratic lawmakers have called the states’ transportation strategy inhumane, accusing Republican officials of using desperate migrants as political pawns in a policy dispute with the administration.

“It’s remarkable that they can criticize the Biden administration being too soft on Venezuela’s regime, then mistreat people who are fleeing that regime,” said Adam Isacson, a migration policy analyst at the Washington Office on Latin America.

State officials in Texas and Arizona have openly discussed the political motivations behind the locations they’re selecting to transport migrants. Abbott said Thursday’s migrant busing operation near the vice president’s residence would allow her to “see firsthand the impact of the open border policies she has helped implement.”

Meanwhile, Christina Pushaw, a spokeswoman for DeSantis, noted that former President Obama has a home on Martha’s Vineyard, which she said is “full of liberals.”

“The fact that Fox News, and not the Department of Homeland Security, the city or local NGOs, were alerted about a plan to leave migrants, including children, on the side of a busy D.C. street makes clear that this is just a cruel, premeditated political stunt,” she said.

The reports prompted some Democratic politicians to call on federal authorities to investigate the incident. The Justice Department declined to comment on questions about a possible investigation into the states’ migrant transportation efforts.

Representatives for Florida’s governor did not respond to several questions about the information provided to migrants ahead of their transportation to Martha’s Vineyard, how the migrants were selected for the operation and who oversaw the transportation.

In addition to the political backlash from Republicans, the Biden administration has faced dire logistical and humanitarian challenges along the U.S.-Mexico border over the past year amid unprecedented levels of migrant apprehensions, which are set to surpass 2 million in fiscal year 2022, an all-time high, government data show.

In recent months, U.S. border officials have processed record numbers of Cubans, Venezuelans and Nicaraguans, who, unlike many Mexican and Central American migrants, cannot be deported to northern Mexico or their home countries because of limits placed by Mexico and strained relations with the leftist regimes in Cuba, Venezuela and Nicaragua.

Karamargin, the spokesperson for the Arizona governor, said the state was not planning to transport migrants to other places beyond the capital. “Washington is the source of the problem,” he said.