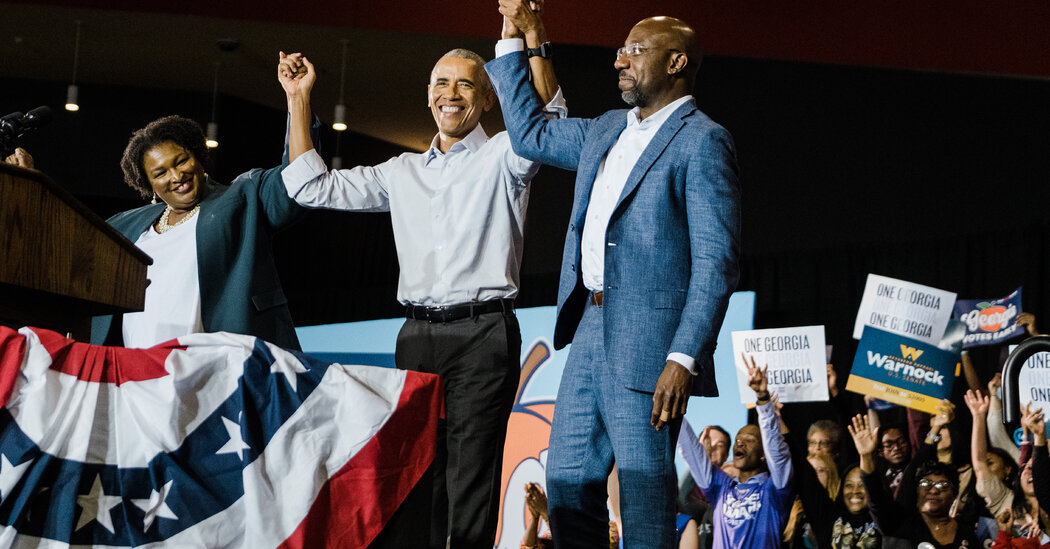 MILWAUKEE — Democrats and Republicans raced on Saturday into the final stretch of more than a dozen competitive contests for governor, as the G.O.P. moves within striking distance of flipping the top office in a series of blue and battleground states and Democrats show surprising strength in several other contests.

With pivotal races for the House and the Senate appearing to shift toward Republicans, the nation’s far more variable and highly consequential races for governor are drawing huge influxes of money. Democrats are also sending in their cavalry, dispatching former President Barack Obama to a rally in Georgia on Friday before appearances in Michigan and Wisconsin on Saturday and in Nevada on Tuesday.

The stakes in these races have become broader and clearer in recent months. The Supreme Court has given states the power to write their own abortion laws, and Republican candidates in places including Arizona, Michigan, Pennsylvania and Wisconsin have embraced former President Donald J. Trump’s lies about the validity of the 2020 election.

Republican candidates for governor, who enjoy a favorable political environment but in many states are being outspent by Democrats, have slammed the airwaves with an avalanche of crime ads. Incumbent Democrats have hit back by pointing to money they have pumped into law enforcement agencies and hammering Republicans for opposing abortion rights.

The current president and his predecessor, both unpopular with swing voters, are absent from the closest races. President Biden recently stumped for the party’s struggling nominee in liberal Oregon and is headed to New Mexico next week. Mr. Trump is holding rallies in places that are safe for his party, like Iowa and Texas, or where he is aiming to prop up Senate candidates, as in Pennsylvania and Ohio.

While the governor’s race in deep-red Oklahoma has become newly competitive for Democrats, and the party has a comfortable lead in divided Pennsylvania, the sour national mood has put the leadership of blue states like New York, New Mexico and Oregon within reach for Republicans. A G.O.P. governor in any of those states could block efforts to expand abortion access and other Democratic priorities.

Some Democratic candidates, trying to turn the narrative around, have gone so far as to claim they are fighting an uphill battle — even in New York, where Democrats outnumber Republicans by two to one.

“I’ve always said I was an underdog,” Gov. Kathy Hochul said in Queens on Friday, a day before her Republican opponent, Representative Lee Zeldin, was set to appear with Gov. Ron DeSantis of Florida. “There’s circumstances sometimes you can’t control. You don’t know what’s happening nationally. There’s national waves. There’s a lot of forces out there.”

Republicans have solidified their hold on the traditional presidential battlegrounds of Florida and Ohio, with incumbent governors building enormous fund-raising advantages and sizable polling leads, and Democrats have all but given up in those states. In Texas, Gov. Greg Abbott has never been seriously threatened by former Representative Beto O’Rourke.

In Michigan, Gov. Gretchen Whitmer, a Democrat who has centered her campaign on her effort to maintain abortion rights, is confronting a narrowing race against her Republican challenger, Tudor Dixon, though she still holds polling and financial edges.

At a campaign rally for Ms. Whitmer and other Democrats in Detroit on Saturday, Mr. Obama sought to frame the midterm elections as a choice between Democrats committed to fighting against corporate greed and conspiracy-obsessed Republicans focused on gaining power and on placating Mr. Trump.

“Oh man, we’re going to own the libs,’ ” Mr. Obama said. “And getting Donald Trump’s approval. That seems to be their agenda.”

Mr. Obama drew an analogy between Democrats like Ms. Whitmer and a reliable plumber, saying that someone with a broken toilet would want a problem solver, not someone who trades in elaborate fantasies.

“Have you heard about the latest conspiracy of the lizard people?” he said. “You’d find another plumber.”

In an interview on Friday, Ms. Dixon, who opposes abortion rights, said she had “been on television and radio as much as possible” to make up for Ms. Whitmer’s cash advantage. Since the beginning of September, the governor and Democrats have spent four times as much on television ads as Ms. Dixon and Republican groups have.

Asked if she would welcome a final-week visit by Mr. Trump, who last held a rally in the state on Oct. 1, Ms. Dixon mentioned a different surrogate — one who three years ago was running for president as a Democrat.

“We’ve already had President Trump here,” she said. “We have other great people. Tulsi Gabbard is coming in this weekend.”

Ms. Whitmer said that “Potus was here a while ago, and having Barack Obama here now is great,” referring to Mr. Biden by his presidential acronym. She added, “The whole world understands Michigan is a really important state on the national map and the consequences of this race are big.”

The lone incumbent Republican governor in a competitive race is Brian Kemp of Georgia, who is leading his rematch with Stacey Abrams, the Democrat who lost to him narrowly in 2018. Polls show Mr. Kemp with a solid advantage, though there is some doubt about whether he will eclipse the 50 percent threshold needed to avoid a runoff in December.

And in Arizona’s open-seat race for governor, the Republican nominee, Kari Lake, a television anchor-turned-Trump acolyte, is in a close race with Katie Hobbs, the Democratic secretary of state, who is widely seen as having mounted a lackluster campaign. A victory by Ms. Lake could have major implications for future elections in Arizona, given her relentless false claims that the 2020 contest was stolen.

Yet the presence on the ballot of Senator Mark Kelly, a Democrat who has led in polls of his race, may help Ms. Hobbs survive.

In some states, Democratic candidates are putting up a stiff challenge or are even ahead. In 12 of the 13 closest governor’s races, the Democratic candidates and their allied groups have spent more money on television advertising since Sept. 1 than their Republican opponents have, according to AdImpact, a media tracking firm.

In Pennsylvania, Josh Shapiro, the Democratic nominee, has built a yawning gap between himself and his underfunded far-right rival, Doug Mastriano, who has promised to ban abortion without exceptions and enact major new voting restrictions. Democrats are also far ahead of Trump-endorsed Republicans in Maryland and Massachusetts, liberal states where moderate Republicans have had recent success in governor’s races.

But Democrats who swept into governor’s mansions in the 2018 electoral rejection of Mr. Trump now find themselves battling decades of history. Michigan and Wisconsin — where Gov. Tony Evers, a Democrat, is neck-and-neck with Tim Michels, a Republican — have not elected a governor of the same party as the sitting president since 1990, while Kansas and New Mexico have not done so since 1986.

At the same time, Republicans, who hold 28 governorships compared with Democrats’ 22, are attacking their Democratic rivals over crime in contests across the country.

Few Republicans in close races have done so quite like Mark Ronchetti, a former TV weatherman running against Michelle Lujan Grisham, the Democratic governor of New Mexico, which Mr. Biden won by 10 percentage points in 2020.

Since the beginning of September, 82 percent of the television ad spending from Mr. Ronchetti and the Republican Governors Association has been about crime, according to AdImpact data. Of all of the nation’s Republican candidates for governor, only Mr. Zeldin in New York has made crime more of a focus of his ads.

Albuquerque, whose metropolitan area includes about half of New Mexico’s population, set a record for homicides in 2021. The killings are a staple of local television news coverage, so Mr. Ronchetti’s ads bashing Ms. Lujan Grisham on crime are often sandwiched between those news reports.

“We’ve always had challenges of making sure we can have a safe city,” Mr. Ronchetti said in an interview. “For the most part, this was a safe place to raise your kids. But it’s gotten out of control.”

Perhaps no Democratic nominee has put up as surprising a performance as Joy Hofmeister in Oklahoma.

Ms. Hofmeister, the state’s superintendent of public instruction, had a viral debate moment this month when she correctly noted that Oklahoma’s violent crime rate under Gov. Kevin Stitt, a Republican, was higher than the rates in California and New York.

“Oklahomans, do you believe we have higher crime than New York or California?” he said. “That’s what she just said.”

In an interview on Thursday, Ms. Hofmeister credited her strength in Oklahoma, where Mr. Trump won 65 percent of the vote in 2020, to focusing on local issues even as Mr. Stitt tries to nationalize the race by tying her to Mr. Biden.

“He is reading from a national script,” she said. “It has absolutely nothing to do with reality. It’s this formula that he thinks somehow is going to work.”