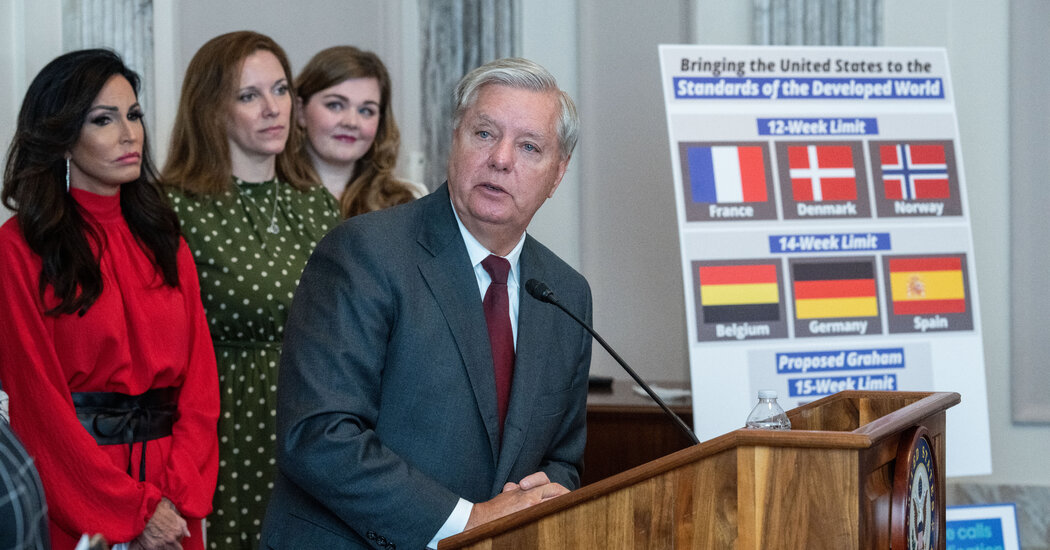 WASHINGTON — Senator Lindsey Graham of South Carolina introduced legislation on Tuesday that would institute a federal ban on abortions after 15 weeks of pregnancy, moving to unite the Republican Party behind a position before midterm elections in which abortion rights have become a potent issue.

There is no chance that Senator Chuck Schumer, Democrat of New York and the majority leader, would allow such a bill to receive a vote in the Senate, where his party has been focused on preserving abortion access after the Supreme Court’s ruling in June ending the constitutional right to abortion.

But Mr. Graham’s proposal was an effort to insulate Republicans from a backlash from voters after that decision, and after subsequent efforts in G.O.P.-led states to enact bans on nearly all abortions.

It was a notable reversal from just weeks ago, when top Republicans including Senator Mitch McConnell of Kentucky, the minority leader, signaled that they were unlikely to pursue a nationwide abortion prohibition after the court’s ruling.

In the weeks since, the Supreme Court’s decision in Dobbs v. Jackson Women’s Health Organization has galvanized Democrats on one of the most charged issues in American politics and underscored for Republicans the political risks of their longstanding opposition to abortion rights.

Mr. Graham’s bill, which would prohibit doctors from performing the procedure after 15 weeks of pregnancy, was an effort to strike a balance between the most conservative Republicans who want to sharply restrict access to abortions or ban them outright and others in the party who want to impose more modest limits.

A recent Pew Research Center poll showed that 61 percent of American adults say abortion should be legal in all or most cases, although the same poll also showed that the partisan divide on the issue has grown over the past two decades.

Mr. Graham’s measure would leave in place state laws with stricter abortion restrictions but supersede those that allow the procedure after 15 weeks, outlawing many abortions that are currently legal.

Moving quickly after the Supreme Court’s ruling, at least 12 Republican-led states have put into place severely restrictive laws that go much further than Mr. Graham’s proposal, allowing no exceptions even for rape or incest. Mr. Graham’s plan contains such exceptions. In Oklahoma and Texas, Republicans have enacted laws prohibiting abortion at fertilization.

There has been a backlash, even in the most conservative states, to restrictions. After a flood of women registered to vote in deeply conservative Kansas after the Supreme Court’s decision, for instance, the state rejected a proposal to remove the right to abortion from its Constitution.

In trying to balance his party’s competing factions, Mr. Graham risked angering both — and giving Democrats a new opening to paint Republicans as extremists weeks before the midterm elections.

Karine Jean-Pierre, the White House press secretary, said in a statement on Tuesday in response to Mr. Graham’s bill that “Republicans in Congress are focused on taking rights away from millions of women.”

While the legislation is less restrictive than some of the most hard-line abortion bans, it would roll back access in some Democratic-led states that have laws protecting it. And it left no question that, if Republicans regain control of the Senate in November, at least some of them plan to pursue the kind of national abortion ban that Mr. McConnell and others have previously said was unlikely.

“If we take back the House and the Senate, I can assure you we’ll have a vote on our bill,” Mr. Graham said, adding that he had not discussed his legislation with Mr. McConnell.

Senate Republicans were not all on board. Senator John Cornyn of Texas and Senator Ron Johnson of Wisconsin, told CNN on Tuesday that the issue should be left to the states.

Still, Democrats seized on the measure to paint Republicans with a broad brush. On the Senate floor, Mr. Schumer called it a “radical bill to institute a nationwide ban on abortions.” He said that “for the hard right, this has never been about states’ rights. This has always been about making abortion illegal.”

Mr. Schumer added: “Republicans are twisting themselves into pretzels trying to explain why they want nationwide abortion bans when they said they’d leave it up to the states.”

In June, Mr. Graham himself said during an appearance on Fox News that abortion laws should be decided by states.

“All of us in the conservative world have believed that there’s nothing in the Constitution giving the federal government the right to regulate abortion,” he told the Fox News host Martha MacCallum.

On Tuesday, Mr. Graham said it was “up to elected officials to define the issue.” He added: “We have the ability in Washington to speak on this issue if we choose. I have chosen to speak.”

He said he had settled on a 15-week threshold because “the science tells us the nerve endings are developed to the point that the unborn child feels pain.” There is no scientific consensus on whether or when a fetus can feel pain.

Mr. Graham said anti-abortion activists from groups like March for Life and the Susan B. Anthony List had persuaded him to move the threshold to 15 weeks from 20 weeks, the point at which abortion would have been banned under a bill he previously introduced.

He pleaded with Democrats to allow a floor vote on the bill.

“We won’t know where America is until we vote,” Mr. Graham said.