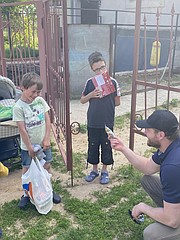 I decided to travel to Ukraine to raise money to help people who were directly impacted by the war in early March.

This decision was made with a belief that my experiences as a mental health counselor, combat veteran and former military contractor would bridge the gap between my community in North Idaho and the people in Ukraine.

My objective was to raise money and show my community how their donations were making an immediate impact.

Not knowing anyone in Ukraine or being able to speak the language, I traveled completely on my own. The plan was to meet a pastor in Ukraine, who I found online. I begged him to allow me the chance to travel there and help.

It was terrifying to make this trip into an active warzone, but it was a calling. Putting fear aside, I left my wife and young children to spend one month in Ukraine.

The response from not only my community, but communities across America was nothing short of a miracle. We raised $170,000 and received medical supplies worth thousands of dollars more.

Donations started coming in from Day 1, and we were able to start a shelter for displaced families in L’viv.

During this trip, I was able to bring medical supplies to areas that needed them most, evacuate civilians from cities that were being invaded and teach a mental health seminar on PTSD and trauma.

As the fighting rages on, I have had to process the devastating impact of this war. Being inside the buildings that were recently destroyed, with the smell of burned flesh still in the air, haunts me.

Experiencing rocket and artillery attacks in Kyiv is unsettling to say the least.

Helping young children who were so traumatized they could not speak is unforgettable.

Dozens of individuals who survived the occupations of Bucha and Irpen shared their horrifying stories. The mass grave site in Bucha, where innocent people were murdered during the occupation, is very real.

These experiences and memories are what drive me to remember that what we have been able to achieve in less than six months has far surpassed even my expectations.

Our communities have stepped in and shown such passion toward the people in Ukraine. People wanted to help; they just needed a way to do it.

We created Project Victory Ukraine, a federally approved nonprofit. The organization now has a board of devoted members, a medical team, a campaign team and trusted partners throughout Ukraine.

We have partnered with the National Police of Ukraine, Ukrainian churches, Ukraine’s chaplain patrol, as well as private foundations and businesses across America.

We have received donations from the Netherlands, Australia and across the U.S. For example, we had no realistic way to ship supplies into Ukraine, but we have since partnered with a Ukrainian-American shipping company in Chicago. This family refuses to charge full shipping rates and helps us get supplies directly into Kyiv.

Despite the ugliness of war, I have also seen a beautiful side of humanity.

I have witnessed Ukrainians coming together to help their fellow citizens.

I have been with men who risked their lives every day evacuating women and children.

I have sat with young women who survived some of the most unspeakable acts of evil and now work in a shelter to prepare meals for delivery to those who are in need.

We have American doctors and nurses working around the clock to secure critical surgical supplies that are then taken directly to the hospital on the front lines.

Children in our communities have been making signs, jewelry and selling lemonade while donating everything they make to this cause.

American companies are matching their employee donations and offering discounts to our nonprofit for tourniquets and other medical supplies.

And Project Victory’s board members work tirelessly without collecting a salary.

We are bringing more surgical supplies requested by doctors to the frontlines, including an EKG machine.

We are partnering with the National Police of Ukraine to help sponsor children who have lost a parent to the war. These children are creating wish lists that include school supplies, hygiene items, food and some small toys.

Preparing to embark on this third trip, the support we have received is nothing short of amazing. There are no words to describe what our communities have been capable of.

But we need more. Every human life is worth saving.

Jared Malone is a mental health counselor for Heritage Health. The formerly enlisted Marine served two combat tours in Iraq in his 20s and later served as a military contractor in Iraq for three years. Jared and his wife live in Post Falls and have two children together. 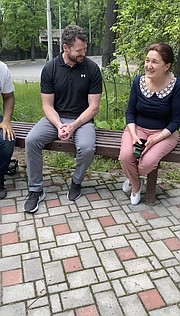