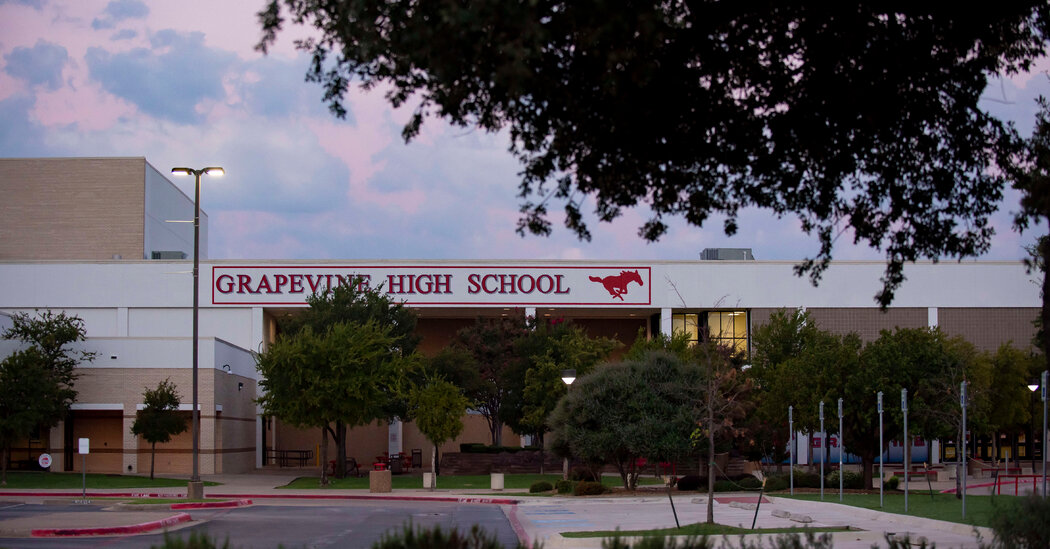 GRAPEVINE, Texas — Ahead of what would usually be a sleepy spring school board election, a mass of fliers appeared on doorsteps in the Fort Worth suburbs, warning of rampant “wokeness” and “sexually explicit books” in schools, and urging changes in leadership.

The fliers were part of a broad effort to shift the ideological direction of school boards in a politically crucial corner of Texas, made possible by a campaign infusion of more than $420,000 from an unlikely source: a local cellphone provider whose mission, it says, is communicating conservative Christian values.

All 11 candidates backed by the company, Patriot Mobile, won their races across four school districts, including the one in Grapevine, Texas, a conservative town where the company is based and where highly rated schools are the main draw for families. In August, the board approved new policies limiting support for transgender students, clamping down on books deemed inappropriate and putting in place new rules that made it possible to be elected to the school board even without a majority of votes.

The entry of a Texas cellphone company into the national tug of war over schools is part of a far more sweeping battle over the future of Texas being waged in the suburbs north of Dallas and Fort Worth.

The company’s efforts have been seen as a model by Republican candidates and conservative activists, who have sought to harness parental anger over public schools as a means of holding onto suburban areas, a fight that could determine the future of the country’s largest red state.

Glen Whitley, the top executive in Tarrant County, said the company has become an important player in politics in this part of the state. “They’ve been successful in taking over the school board in Grapevine-Colleyville, in Keller and Southlake,” Mr. Whitley, a Republican, said. He said the company appeared to be setting its sights next on city council races next year.

Patriot Mobile representatives are a frequent presence on the conservative political circuit across the country, taking praise from Steve Bannon at the Conservative Political Action Conference, buying tables at nonprofit fund-raisers and meeting with candidates from inside and outside of Texas.

Modeled after a progressive, California-based cellphone provider founded in the 1980s, the company unabashedly embraces its partisan agenda, donating money to anti-abortion and other conservative causes. Lately, it has begun spending money on behalf of Republican political candidates.

“The business model is pretty simple and we expected that something similar would emerge on the right,” he said of the plan for channeling profits into politics. “But it didn’t — until now.”

Its political activism has already changed things on the ground in Grapevine, where the nine-year-old company is based. The new policies on books and transgender issues passed 4-to-3, with the two Patriot Mobile-backed candidates making the difference.

More on U.S. Schools and Education

An array of high school students in this increasingly diverse area responded with a walkout from class, led by transgender and nonbinary students. Parents opposed to the changes have begun meeting to figure out their own response.

In Grapevine’s harvest-and-wine-themed downtown, where upscale coffee shops and restaurants can be found near displays of “Ultra MAGA” sweatshirts, Patriot Mobile is headquartered in a cluster of offices unmarked from the outside.

The company’s logo adorns a conference room where Senator Ted Cruz’s father, Rafael, leads a packed Bible study every Tuesday. Along one cubicle hangs a Texas flag with silhouettes of assault rifles and the words “Come and Take It,” in a nod to a well-known slogan from the Texas revolution.

“We just said, ‘Look, we’re going to put God first,’” said Glenn Story, the founder and chief executive, sitting in his office on a recent afternoon, a guitar signed by Donald Trump Jr. hanging on the wall. “Which is why I haven’t erased that from the board,” he said, pointing to a list of core values written on a whiteboard, beginning with “Missionaries vs. Mercenaries.”

“Our mission is to support our God-given Constitutional rights,” said Ms. Story, the chief operating officer and Mr. Story’s wife.

“And to honor God, always,” said Leigh Wambsganss, a vice president at the company who also heads the political action committee, Patriot Mobile Action, founded by the company’s executives.

Corporations donate regularly to state and local political campaigns, but a regional company, founded with a partisan mission and willing to spend money in backyard races, is unusual. School boards across the country are increasingly becoming political battlegrounds, attracting larger sums of money and national groups into what had once been largely invisible local contests.

Patriot Mobile’s political activities are focused on suburban Tarrant County, north of Fort Worth, in large part because the county has been trending blue, narrowly carried by President Biden in 2020 and by the former Democratic congressman and current candidate for governor, Beto O’Rourke, during his 2018 Senate run.

Long a bastion of well-regarded schools, conservative churches and largely well-off, white neighborhoods, the area nurtured strong Tea Party groups during the Obama administration and, more recently, those that supported a Republican primary challenger to the right of Gov. Greg Abbott. It has a reputation, among some in the party, as a hotbed for hard-right politics.

The new policies voted on in the Grapevine-Colleyville Independent School District have divided parents and raised concern among some teachers, some of whom said they feared becoming targets of the new school board.

One of the new board members suggested as much during a Republican forum over the summer, saying the board had a “list” of teachers who she believed were activists promoting progressive ideas about race and equity.

“They are just poison and they are taking our schools down,” the board member, Tammy Nakamura, said.

Some teachers have begun removing books from their classrooms rather than abide by new rules that require titles to be posted online so that they can be publicly reviewed. The district canceled its annual Scholastic book fair after previous concerns about books that were “mis-merchandised” and were not age-appropriate, a district spokeswoman said.

“You now have the school board approving library books, and I feel that is completely micromanaging the administration,” said Jorge Rodríguez, a school board member who voted against the new policies, adding that more than a quarter of the district’s 14,000 students were economically disadvantaged. “We’re here to educate kids and this is not helping.”

The top spokesman for the district resigned a few months after being hired, citing the “divisive” atmosphere. The district’s superintendent said recently that he planned to retire at the end of the school year.

“I’ve always been a staunch conservative,” said Christy Horne, a parent whose two children go to elementary school in the district. But the attacks on teachers were too much for her, Ms. Horne said. “It got personal.”

But for Mario Cordova, another parent in the district, the new school board leadership has rightly given more control over curriculum and reading material to parents, many of whom were dismayed by what they saw their children learning in remote schooling during the pandemic.

“Parents across the district voted for a change on the board last May and are happy to see them follow through,” Mr. Cordova wrote in an email. Opponents of the changes are “crying wolf,” he added. “This crowd has convinced themselves they cannot teach children without incessant conversations about sex and gender.”

For many parents and teachers, an early sign that their schools had become a political battleground came last year with complaints over the first Black high school principal at Colleyville Heritage High School.

Some parents contended that the principal, Dr. James Whitfield, had been promoting “critical race theory” and were rankled by an email he sent, days after the death of George Floyd, expressing solidarity with Black Lives Matter protesters and a desire to create greater equity.

“He’s going to start a diversity advisory committee? At our school? He’s going to say that Black Lives Matter?” said Dr. Whitfield, describing the reaction he encountered. The fight made national headlines and the district eventually reached a settlement with Dr. Whitfield that included his departure as principal.

The district superintendent has said the decision was not about race.

A few months after Dr. Whitfield’s departure, opponents of a diversity plan in neighboring Southlake won control of the local school board, with help from a political action committee, Southlake Families. One of the founders was Ms. Wambsganss, a parent in Southlake schools and a former television news anchor. Another was Tim O’Hare, who is the Republican nominee in November’s election to lead Tarrant County.

Parents both in Southlake and in Grapevine-Colleyville have been offended by the sexual content, including explicit descriptions of sexual activity, in some books offered to students, as well as certain discussions of gender and race, said Ms. Wambsganss, now at Patriot Mobile.

“Parents do not believe that gender issues should be discussed in K through 12,” she said. “Especially Christian parents do not want multiple genders discussed with their children by someone who is not their parents.”

The victories by Patriot Mobile-backed candidates surprised some parents who did not agree with the new direction in the district.

On a recent morning, a dozen of those parents and community members gathered at the local botanical garden. For many, it was the first time they had met after finding one another through one of the many proliferating Facebook pages dedicated to the school district conflicts.

“I ask myself every day, what did I bring my children into,” said Katherine Parks, who moved to the area from France.

“We were Swift Boated by these people,” said Tom Hart, a Republican former city councilman in Colleyville, referring to the political attacks that helped sink John Kerry’s presidential campaign in 2004. “We cannot combat $400,000 in funding from the outside.”

As parents met to strategize, some students at Grapevine High School, where the Gay-Straight Alliance club was shuttered for lack of a faculty sponsor, have already begun to find ways to protest. A student started a book club for reading banned books. A group of friends organized a walkout.

“We can find solidarity, and we can find safety in each other,” said Marceline, who asked that only their first name be used out of concern for possible reprisals. “Because we cannot trust the adults.”

About 100 students joined in the walkout. No similar protest has taken place at nearby Colleyville Heritage High School, and for many students, the beginning of the school year has proceeded, more or less, as it always has.