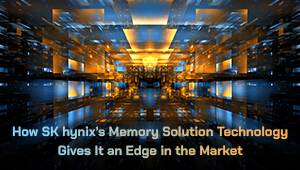 Over the past several decades, SK hynix has grown into a semiconductor memory company specializing in DRAM and NAND products. Through multiple layers of technological innovation, the company has enabled a broad range of electronic devices and convenient services to operate smoothly and reliably.

Behind such technological innovations are the development of media1) technology that directly contributes to memory performance and capacity improvement and that of media control technology, which maximizes the use of DRAM and NAND memory, while improving user convenience.

1) Media: a storage medium for recording data. In this case, media refers to DRAM or NAND.

You may be familiar with semiconductor memory, such as DRAM and NAND, but perhaps not with memory solution technology. Essentially, a memory solution consists of a hardware chip that makes the system more convenient and useful, along with software that is installed on it.

Memory solutions, again, can be divided into DRAM solution and NAND solution. Among the two, NAND solution has been used ever since NAND memory was first introduced to the market and is the key competitiveness for NAND-based products. This article will mainly cover the NAND solution but will also give a brief introduction to the DRAM solution, of which the market is just beginning to open up. 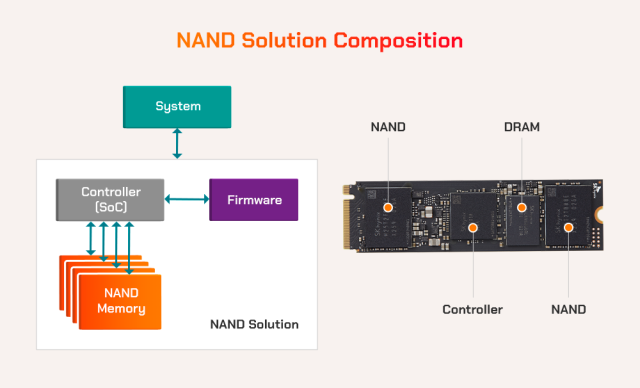 NAND memory, one of SK hynix’s flagship products, provides a high-capacity storage space at a lower cost than DRAM and has the advantage of being non-volatile, which means that it does not lose data even when power is turned off. NAND, however, has some weaknesses such as requiring larger units of read/write operations, slower speeds, and a limited number of rewrite cycles. Also, when rewriting, block units of data dozens of times larger than the page units for the read operation need to be deleted first.

Unlike DRAM, which guarantees the integrity of every memory cell, NAND must tolerate some defects. Thus, it is NAND solution’s role to make up for these characteristics and help NAND memory function more conveniently and efficiently. Consisting of the SoC (System on Chip), which plays the brain part, and firmware, a software that controls the function of the SoC, a NAND solution allows fast and stable operation of the memory under various working conditions. 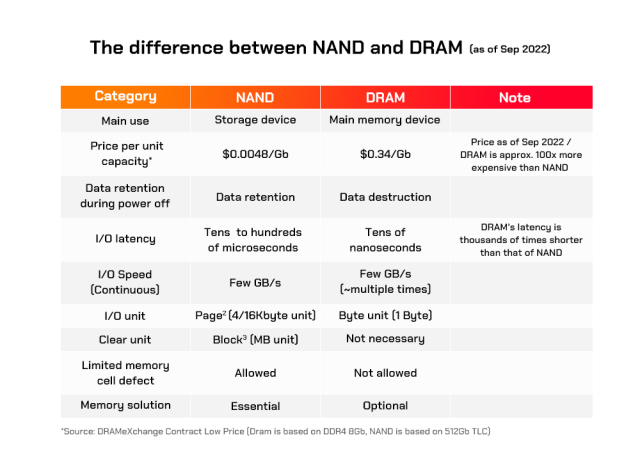 2) Page: A basic unit of reading/writing in NAND, referring to a bundle of NAND cells. One page consists of x-number of cells connected to one word line.

3) Block: A unit of several pages is called a block.

One of the best examples showing the importance of a memory solution is to logically increase the capacity of a physical 1-bit NAND cell (single-level cell, or SLC) to an MLC (multi-level cell, 2bits/cell), which can halve the price per unit capacity. Compared to SLCs, which are more expensive and have smaller storage capacity, MLCs can store twice as much data in one cell as SLCs. However, MLCs are also more likely to suffer errors and have shorter lifespans. By controlling these problems using memory solution technology, SSDs were able to provide greater cost effectiveness compared to HDDs, and expand the market by establishing themselves as popular storage devices for general users. Currently, this technology is evolving from TLC (triple-level cell) to QLC (quad-level cell) and PLC (penta-level cell), continuously increasing the market value.

Another role of the memory solution is to make up for the weaknesses of NAND memory to ensure that there are no usability issues. As previously noted, NAND delivers high-capacity, non-volatile memory at a reasonable cost, but the media itself has various limitations. The NAND memory solution plays an instrumental role in overcoming these limitations by providing media control functions, such as ECC (error correcting code), bad block management, logical-physical address4) conversion, and wear-leveling5). This is the role that the host should take on should the NAND solution fail to fulfill, which means increased load on the system and delays in the processing speeds.

5) Wear-leveling: In order to prevent shortening of a specific NAND cell’s lifespan caused by repeated reading/writing, the controller maps the appropriate address while carrying out monitoring so that data can be distributed to cells evenly.

DRAM is another major memory product used to store the programs and data needed to run processors (CPUs, GPUs, APs). For DRAM, read/write operation control is handled by the DRAM controller built into the host’s processor. This means that, in contrast to NAND, DRAM did not require a dedicated solution.

In recent years, however, a new standard for DRAM solution called CXL (Compute Express Link) has been established to meet the industry-wide demand for high-capacity memory amid a stagnated increase in DRAM capacity and a rise in costs. CXL is a new standardized interface that utilizes the PCI bus used to expand computer peripherals such as SSDs and its first market is expected to be for high-capacity DRAM for data centers.

A consortium of memory and server providers, including SK hynix, launched in 2019 to prepare for CXL’s commercialization; the memory industry is also promoting the commercialization of DRAM solutions in line with these market changes. In particular, SK hynix developed a DDR5-based CXL solution in August and is collaborating with major partners such as Dell, Intel, AMD, and Montage Technology to expand the CXL memory ecosystem. By introducing various CXL-based bandwidth/capacity expansion memory solution products in the future, the company expects to play a leading role in the next-generation memory solution market.

SK hynix also announced earlier this year development of PIM (processing in memory), a product with a built-in AI accelerator-also a DRAM solution. With the advent of Big Data, there has been an explosion of data that needs to be processed and stored, and a data bottleneck has emerged between processors and memory/storage despite advances in system development. In light of this, SK hynix is striving to provide faster and larger memory and storage capacity, and its PIM product with built-in data processing function is expected to contribute to solving this data bottleneck.

Over the past several decades, the semiconductor industry has led the rapid development of the IT industry by realizing Moore’s Law, which posits that chip density doubles every 18 months. However, the semiconductor industry, which has always aimed at providing smaller and faster chips, is now facing challenges due to the physical limitations of the semiconductor manufacturing process as well as the soaring costs of scaling. SK hynix is committed to developing and securing competitive memory solutions that will play a crucial role in closing this gap between customer needs and available technology.

As SK hynix strives to become a leading AI-based solution provider that enables people to store all kinds of data on semiconductor memory, create new value and bring a greater happiness to mankind, the company will continue to innovate memory solutions.