How to Watch Hellraiser Movies In Order 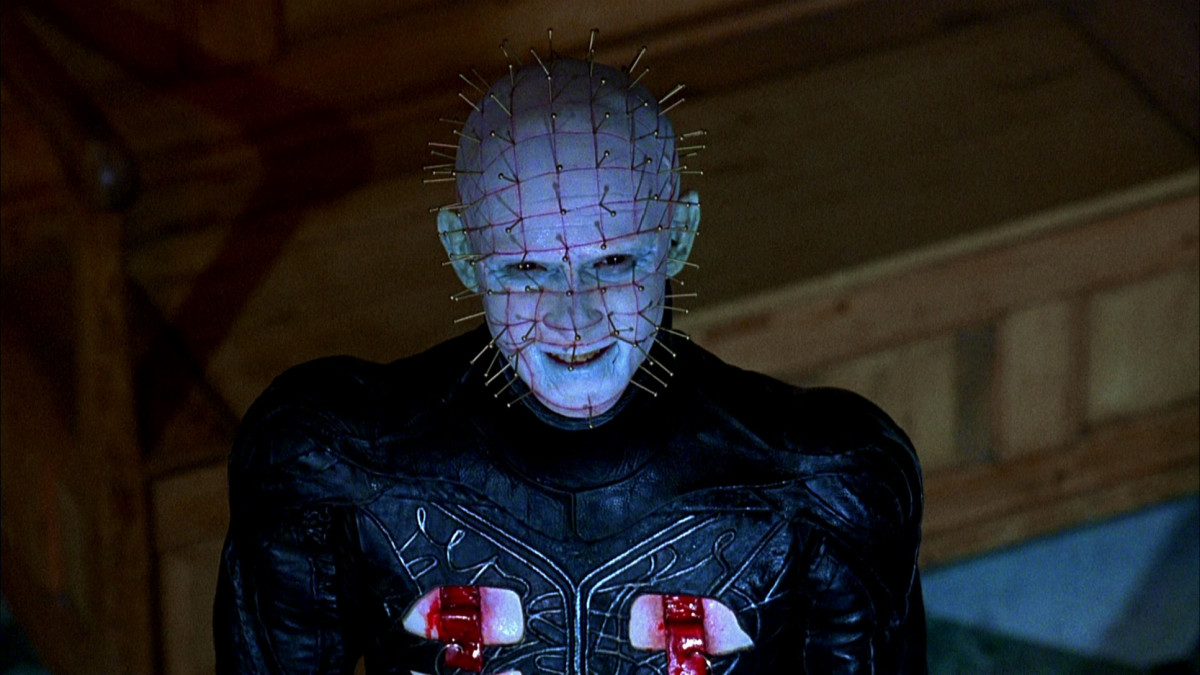 Hellraiser is coming to Hulu just in time for Halloween.

The horror franchise is most known for its creepy icon, Pinhead. The character is instantly recognizable due to his pale skin, black eyes, and skin covered with intricately placed nails that form a perfect grid over his face.

The series has had its ups and downs, and eventually started releasing sequels direct-to-video. This can make watching the movies in order a confusing task, which is why we compiled this list to help out. Here’s exactly how to watch the Hellraiser movies in order of story.

Related: The 32 Best Slasher Movies of All Time, Ranked

The first film in the Hellraiser series is also the first film chronologically (based on a technicality). It tells the story of Kirsty Cotton, who discovers that her stepmother is helping her uncle murder local men in order to regain his body after escaping from the cenobite’s dimension.

Hellbound: Hellraiser II takes place immediately after the events of Hellraiser. Kirsty wakes up in a hospital, only to discover the head doctor is a sadist who has been searching for the puzzle. He uses a patient to open the box and unleashes the cenobites amongst the unsuspecting patients.

Set after the events of Hellbound, Hellraiser III: Hell on Earth shows Pinhead trying to escape from his imprisonment in a stone pillar. The ghost of Pinhead’s human side, Elliot Spencer, works to try to reunite with Pinhead in hopes to reign in the demon’s bloodlust.

Related: The 151 Best Horror Movies of All Time

The next film in the series, Hellraiser: Inferno, tells the story of corrupt police detective Joseph Thorne, who is hunting a serial killer. When he finds the puzzle box, it’s revealed that the killer might not be human. From this point forward, the Hellraiser series started telling generally unrelated stories like this.

Dean Winters plays Trevor, husband to Kirsty Cotton, in Hellraiser: Hellseeker. After the couple gets into a car accident and Kirsty disappears, Trevor tries to solve the mystery and clear his name. Not surprisingly, the puzzle box turns up, revealing Pinhead’s involvement.

In Hellraiser: Deader, After a suicide cult claims to have found the secret to returning from death, reporter Amy Klein (Kari Wuhrer) goes to Bucharest to investigate. Once again, the puzzle box turns up and it seems that Pinhead isn’t thrilled about the cult’s activities.

Hellraiser: Revelations is the first movie in the franchise where Doug Bradley didn’t return to play Pinhead. One year after two young men disappear on vacation in Mexico, their families gather to mourn. The authorities found a tape filmed by the boys during their trip, which reveals that Pinhead was involved in the disappearance.

How to watch Hellraiser: Revelations: Stream on PLEX, Pluto TV, Tubi, and Vudu.

The second movie not to feature Doug Bradley as Pinhead, Hellraiser: Judgment tells a complicated story involving the Auditor, another entity from Pinhead’s dimension, who starts luring bad people to a house so he can torture them. Also, two brothers who are both detectives are investigating a serial killer and then end up in the Auditor’s clutches. Pinhead stands around and sometimes delivers spooky dialogue. It’s on the “meh” side of Hellraiser flicks.

While Hellraiser: Bloodline tells a story that starts in 1796, the entire film is actually set in 2127 and tells the story of Dr. Paul Merchant trying to trap and kill Pinhead for good. During the film, he explains his family’s connection to the puzzle and flashes back to 1796 and 1996. The 1996 segment directly follows the events from Hellraiser III. However, since the film is told from Merchant’s perspective in 2127, it’s technically the last movie in the original series’ timeline.

Doug Bradley returns as Pinhead for Bloodline, and keep your eyes peeled for Adam Scott, who apparently has not aged a day since 1996.

Set in “the real world,” this movie tells the story of a group of friends who attend a Hellraiser-themed party, only to find out that maybe Pinhead is real. This movie directly references the Hellraiser franchise and takes place outside of the series’ continuity. It also features a young Henry Cavill facing off against a cenobite. Considering this was several years before becoming Superman, he doesn’t fare so well.

Lastly, the latest Hellraiser movie, simply titled Hellraiser (2022), revives the franchise back into the mainstream.

Sense8 star Jamie Clayton portrays a new version of Pinhead. As this movie is a fresh start for the franchise, it can be viewed separately from the previous films. Hellraiser (2022) focuses on a young woman named Riley (Odessa A’zion, daughter of Pamela Adlon) who struggles with addiction and compulsive behaviors she has a hard time controlling.

Director David Bruckner said of Pinhead’s casting, “We felt a kind of anticipation around the fans to reimagine the character. We knew we wanted Pinhead to be a woman. Jamie was just the right person for the role. A person’s identity can be really exciting for a role in many ways, but I have to emphasize that Jamie absolutely killed, that’s how we got there.”

He added, “What Doug Bradley did with the character is so iconic. We didn’t want to do a Doug Bradley impression, we just didn’t think that’s possible to do. There will be suffering, but you’re going to get a sense of what Pinhead’s desires might be in a way that hits a little different.”

How many Hellbound movies are there?

Including the upcoming Hellraiser (2022), there are 11 films in the Hellraiser franchise. Only one film, the second in the series, is called Hellbound. The original 1987 movie was going to be called Hellbound at one point, but the named was changed to Hellraiser.

Is Pinhead good or evil?

Pinhead is neither good nor evil. He describes himself as “an angel to some, a demon to others.” While the cenobites have been described as demons, they consider themselves explorers of the flesh. However, most people that encounter Pinhead would consider him a pretty bad guy.

Why does Hellraiser have nails in his head?

The cenobites are “explorers of the flesh.” When they submit themselves to Leviathan, the God of Flesh, their bodies are twisted and distorted in grotesque ways. The specific cenobite alterations are often related to the victim’s personality. Pinhead was a soldier who was looking for order in the world after experiencing the horrors of war, so the pins are likely an expression of that.

What is the meaning behind Hellraiser?

The original novella that Hellraiser is based on, The Hellbound Heart, was inspired by author Clive Barker‘s days as a hustler in the 1970s. He was also inspired by S&M culture and wanted to tell a story that explored sexuality between good and evil. In the original story (and the film it’s based on), Pinhead and cenobites aren’t necessarily the villains, but instead play the role of enforcers.

Who can beat Pinhead?

Technically speaking, anyone could potentially beat Pinhead. In the first Hellraiser film, Kirsty Cotton defeats him by solving the puzzle box before he can drag her back to his dimension. Other cenobites have also defeated Pinhead, including Dr. Channard, who killed Pinhead by transforming him back into a human and then slitting his throat.

Was Pinhead a female?

In the original Hellraiser films, Pinhead was portrayed by male actors. Doug Bradley most famously played the character in four theatrical movies and four direct-to-video movies. Interestingly, in the book, the lead Cenobite (who was not Pinhead) did not have a discernable gender.

In the upcoming reboot, Pinhead will be played by Jamie Clayton, which director David Bruckner said was deliberate: They wanted Pinhead to be a woman in the newest installment of the Hellraiser lore.

How many kills does Pinhead have?

This is a difficult question to answer: Traditionally, Pinhead doesn’t kill people, they simple drag people to a Hell-like dimension where they are either tortured or transformed into a cenobite. In Hellraiser 3, however, Pinhead kills many people, including a nightclub full of patrons. It’s not known how many people were in the club during the massacre, so his exact kill count is unknown. In later movies, he returns to dragging people to “Hell.”

How strong is Pinhead?

Pinhead is supernaturally strong. It’s unclear how much physical strength they have, although it appears to be more than a normal human. Pinhead also has the power to control blade-tipped chains with their mind.

Is Pinhead stronger than “The Entity?”

No, Pinhead is not stronger than “The Entity.” The Entity is the villain of the game Dead by Daylight and is a malevolent being that torments innocent victims across the cosmos and devours worlds. Pinhead is a downloadable killer for the game, suggesting that they either sided with The Entity or were coerced into working for it.

What is Pinhead’s real name?

In the original Hellraiser continuity beginning in 1987, Pinhead’s name was Elliot Spencer before he was transformed into a cenobite. Also, the name Pinhead isn’t the character’s actual name. Instead, it was just a nickname that the costume department came up with. In the first film, the character is billed as “Lead Cenobite” in the film’s credits.

What kind of horror is Hellraiser?

Hellraiser is considered to be multiple kinds of horror, although it is mainly classified as supernatural horror and body horror. The first film also has elements of haunted house fiction, and later films in the series would veer towards fantasy horror and once even into sci-fi horror. Some of the later movies also included elements of mystery horror as well.

What do the Cenobites want?

In the Hellraiser universe, the Cenobites serve the Order of the Gash and worship Leviathan, God of Flesh. They consider themselves explorers of physical experience, and they seem to be looking for the most intense physical experiences possible, even if those experiences are painful. In regards to their goals, they come to Earth when someone opens the puzzle box and to bring that person back to their dimension, which closes the “doorway” that the puzzle box opened.

What powers does Pinhead have?

Is Hellraiser Marvel or DC?

Hellraiser is neither Marvel nor DC, although Marvel did produce a run of Hellraiser comics in the 1990s under its Epic Comics imprint. Since then, the license was picked up by Boom! Studios, who have produced multiple series of Hellraiser comics, many of which were written by creator Clive Barker.

What country is Hellraiser set in?

The first Hellraiser movie was originally intended to be set in England, and many of the locations used for filming were in London. It was later decided to make the film vaguely American, and some of the actors’ lines were dubbed over by Americans. Based on the following films in the original continuity, Hellraiser is set somewhere in America.

Is the Hellraiser house real?

Yes, a real house was used for Hellraiser (1987). Filming took place in and around London. For the Cotton house, a real house was used in the Dollis Hill area of London. In the film, the house was dilapidated and in need of repairs. In real life, those repairs have been made and it currently doesn’t look much like it did in the movie.

What is the box in Hellraiser called?

The box is called the Lament Configuration, or the LeMarchand Configuration. In the film series’ continuity, the box was built by Philip LeMarchand in France in 1796. A local aristocrat, Duc de L’Isle, commissioned the box from the toymaker, who had a good reputation in the area. The box was designed specifically to be enchanted as a portal to a dimension the aristocrat believed to be Hell. In Hellbound: Hellraiser II, it is revealed that there are multiple puzzle boxes, so it’s unclear which one is the original.

Next, find out how to watch the Halloween movies in order of story.

Metro Detroit entertainment Oct. 7 and beyond – The Oakland Press