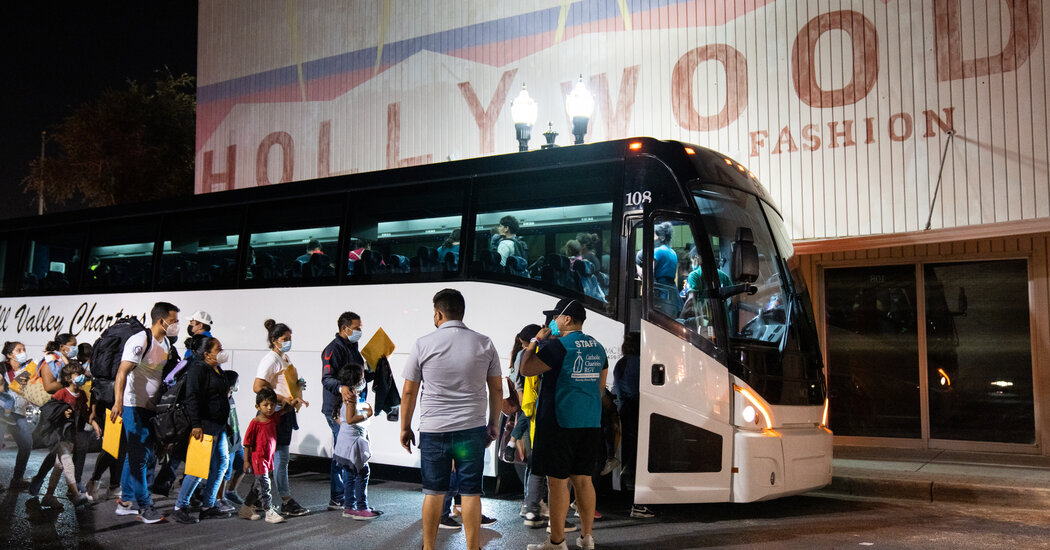 In the fall of 2018, President Donald J. Trump was pushing aides on an idea he wanted to carry out on the border — transporting undocumented immigrants to so-called sanctuary cities.

The idea had simmered for months, culminating in a call Mr. Trump placed to Kirstjen Nielsen, his homeland security secretary.

Mr. Trump, Ms. Nielsen’s former chief of staff recalled, wanted to round up migrants in Republican-controlled states and “bus and dump” them in major cities. He wanted to bus migrants who had been deemed to be “murderers, rapists and criminals” to places, such as California, where officials had declined to help carry out the administration’s rigorous deportation policies, according to the former chief of staff, Miles Taylor.

The idea never advanced in the Trump administration, in part because of legal concerns. But four years later, three Republican governors have brought it to visceral life, busing and flying thousands of migrants — not just criminals — from the border and dropping them off in Martha’s Vineyard, New York City and other Democratic-leaning areas.

The former president’s influence on the Republican Party can be measured not only in the electoral victories and losses of the candidates he endorses but also in the nativism that has come to define the party’s immigration politics. The Republican governors of Arizona, Florida and Texas turned an abandoned Trumpian notion into action, inspired by his hard-line immigration policies as well as his taste for a combative style of political theater.

In recent weeks, the three governors — Greg Abbott of Texas, Ron DeSantis of Florida and Doug Ducey of Arizona — have been criticized for treating desperate migrants fleeing Venezuela and other countries as political pawns. Migrants have been sent to blue cities, states and even vacation spots where local officials were caught by surprise and lacked a support network for people seeking refuge.

Mr. Trump routinely pushed his administration to exceed the bounds of what the law would allow. The practice of shipping humans across the country to score political points — an echo of the Reverse Freedom Rides of the early 1960s, when Southern segregationists sent Black families to Northern cities as a racist stunt — underscores how far to the right Republicans have shifted on immigration since Mr. Trump’s rise, often with a callousness that they believe appeals to their voting base.

A spokesman for the former president, Taylor Budowich, said Mr. Trump had fought to secure America’s Southern border and noted that others were doing what he had proposed. “Republicans across our country continue to follow his lead on this important issue and others in support of his America First movement,” Mr. Budowich said.

But the idea’s origin story is murky.

Three years before Mr. Trump promoted the migrant-transportation concept in the White House in 2018, Mike Huckabee, the former governor of Arkansas, publicly floated similar ideas while he was running for president.

At the time, refugees from the Syrian civil war were arriving in the United States. Mr. Huckabee suggested sending them to politically sensitive spots, including Chappaqua, N.Y., where Hillary Clinton owned a home; Burlington, Vt., where Senator Bernie Sanders had been mayor; and the Obama White House.

“You got a lot of people out there on the left who think that that’s what we ought to be doing,” Mr. Huckabee said in a November 2015 interview on CNN. “Fine. Let’s put them in their neighborhoods.”

Mark Krikorian, the director of the Center for Immigration Studies, a conservative think tank that advocates restricting immigration, said that the notion of sending migrants to other cities was “kind of an old chestnut,” adding, “It’s just that nobody pulled the trigger on it.”

In the 2016 presidential campaign, Mr. Trump began discussing the idea with his advisers, according to former officials. But it was not until 2018 that he explicitly demanded that officials make such a move, former Trump administration officials recall.

Around the same time, Mr. Huckabee’s daughter, Sarah Huckabee Sanders, then the White House press secretary, had suggested transporting migrants in such a way, former officials recalled. But it appeared to be raised as more of a talking point than as a serious policy request. There was never a budgetary consideration about it, one former senior administration official said.

Former officials said that Stephen Miller, a senior policy adviser to Mr. Trump and an immigration hard-liner, was in touch with officials at the Department of Homeland Security about the concept at one point, but they emphasized that it was not his idea.

The administration’s immigration lawyers questioned the legality of such a move. Congress had not approved money for that purpose, they noted. There was also some reluctance among White House aides who believed that Mr. Trump’s immigration policy had been tailored around deportations — not helping send undocumented immigrants deeper into the country.

Of the Republicans who have appropriated Mr. Trump’s public call to send migrants to Democratic-led places, Mr. Abbott has had a particularly close relationship with the former administration, especially with Mr. Miller.

Texas was involved in lawsuits related to the administration’s immigration efforts. The state’s attorney general also threatened to sue if the White House did not follow through on its desire to end the Obama-era policy known as DACA, in which undocumented immigrants brought to the U.S. when they were younger were spared deportation.

Mr. Miller had what one Republican called a “solid relationship” with Mr. Abbott during the Trump administration. But a person close to Mr. Miller said that he had not advised any of the governors on their recent actions.