Hurricane Ian Leaves Behind a Staggering Scale of Damage in Florida 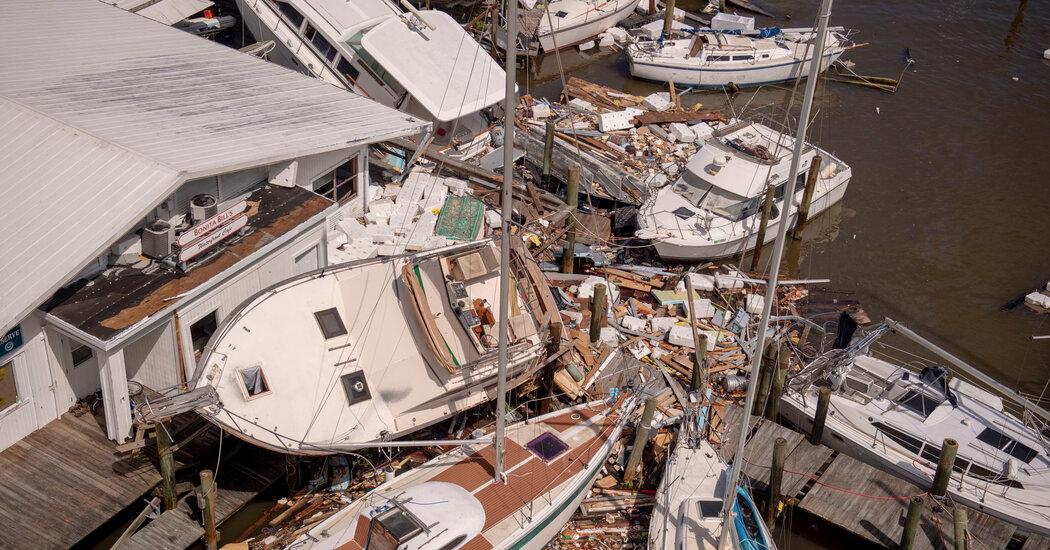 FORT MYERS, Fla. — The extent of Hurricane Ian’s destruction became clearer on Thursday as people across southwestern Florida, left without electricity, drinking water or inhabitable homes, began to assess the damage and gird for what Gov. Ron DeSantis said would be a yearslong recovery.

The scale of the wreckage was staggering, even to Florida residents who had survived and rebuilt after other powerful hurricanes. The storm pulverized roads, toppled trees, gutted downtown storefronts and set cars afloat, leaving a soggy scar of ruined homes and businesses from the coastal cities of Naples and Fort Myers to inland communities around Orlando.

Although state officials had not released a death toll by late in the day, Mr. DeSantis said Thursday night that “we absolutely expect” to learn of storm-related fatalities as rescuers work through a backlog of 911 calls and scour the most devastated neighborhoods. More than 500 people in Charlotte and Lee Counties, the hardest hit, had been rescued on Thursday, the Florida Division of Emergency Management said; the small town of Fort Myers Beach, on a barrier island just off the coast, appeared decimated.

While Ian left Florida on Thursday afternoon as a tropical storm, South Carolina residents were bracing for lashing winds and heavy rain as it quickly became a hurricane again at sea; forecasters said it could strengthen again before doubling back onto land there by Friday.

Photos from several areas of the state showed homes crunched together in a chaotic jumble, or smashed into what looked like toothpicks. Fishing boats and pleasure cruisers had been hurled onto the ground as if they were bathtub toys. The streets were a perilous obstacle course of toppled trees and downed wires.

In North Fort Myers, where Marion Burkholder, 84, survived the storm by clambering into a dinghy inside a neighbor’s screened-in porch and floating up with the rising waters, Thursday brought dreaded news. Her carpets were sopping and her floors were covered with a dark brown liquid. Her fridge lay on its side.

“Everything floated,” said Marvis Long, 96, who lives nearby. “The water was coming in just like waves in here.”

Mayors, sheriffs and other officials surveying the damage struggled to even describe its scope. The sheriff in Volusia County, near Orlando on the state’s east coast, said by text message that the coastal county was seeing “unprecedented flooding.” Mr. DeSantis said there had been “biblical” storm surge on Sanibel Island, normally a tourist haven of gleaming beaches and mangroves southwest of Fort Myers.

“The damage that was done has been historic,” Mr. DeSantis said in a briefing on Thursday. “We’ve never seen a flood event like this. We’ve never seen storm surge of this magnitude.”

On Fort Myers Beach, a laid-back strip dotted with hotels, bars and restaurants that for many Southwest Florida residents offered a cherished escape from the mainland, the storm had laid waste to beloved landmarks, including the fishing pier and Times Square, the communal gathering spot where sunset was celebrated each night. Several residents of the island reported not hearing from friends who rode out the storm there.

“When you look at Fort Myers Beach in particular, there’s no words to describe it,” Sheriff Carmine Marceno of Lee County said after taking a helicopter tour of his county, which is just to the north of where Hurricane Ian came ashore as a Category 4 hurricane on Wednesday with winds up to 155 miles per hour.

The causeway to nearby Sanibel Island had a missing section and a collapsed section, said Jared Moskowitz, Florida’s former emergency management chief, who flew over the area on Thursday. “Fort Myers Beach and Sanibel Island look like they will need to be 80 percent rebuilt,” he estimated.

The storm’s heavy blow to infrastructure complicated efforts to gauge the damage — early estimates said insured losses could reach up to $40 billion — and to reach hard-hit barrier islands, where homes and businesses were now heaps of wood pulp and broken concrete. Cell service was spotty or nonexistent up and down the coast, another agonizing impediment to residents’ efforts to seek help or reach missing family members.

“You’re powerless to help,” said Julie Hittle, who lives in Texas and has been anxiously waiting for updates from her brother, who fled his flooding apartment in Naples by crawling out a window and onto the roof of a minivan.

When a flicker of cell service returned on Thursday evening, her brother, Chip Aldridge, 56, recounted how he, his fiancée and dog, Kobi, had walked two miles through the storm and ended up at a La Quinta Inn, where they were now staying because their apartment was a mildewy shambles. Mr. Aldridge had lost everything in Hurricane Irma in 2017, and was now facing the prospect of starting over, once again.

“We’re survivors,” Mr. Aldridge said in a telephone interview. “Last night was shock and just exhaustion. This morning was, OK, what’s next? Tomorrow we go face the actual reality.”

The economic toll of the storm in a region heavily dependent on tourism and recreation was only beginning to be felt. Universal Studios in Orlando had not announced when it would reopen, though Disney said its theme parks appeared to have minimal structural damage and would start to reopen on Friday. On both the east and west coasts, beachside bars, boardwalks and piers that had been bustling with tourists a week ago were now a wasteland of muddy debris.

At least 2.6 million people remained without power on Thursday, though Florida officials said there were 20,000 utility workers poised to start getting power back on.

The storm severed sections of two bridges connecting mainland Florida to barrier islands in the Gulf of Mexico and reduced some roads to rubble while littering others with trees and power lines. Rescuers were arriving by air and sea to reach people who had not evacuated.

Across the region on Thursday, people waded back home and trudged up muddy, debris-covered streets that had been raging waterways just a day earlier to see what, if anything, had survived.

In Port Charlotte, across a river from where the storm made landfall, Teresa Madden and her husband slipped on waders to slug through thigh-deep brown water — risking encounters with red ants, snakes and the two alligators known to live in the lake at their community for people 55 and older.

The water had spared most of the homes, but one had been destroyed by the wind, its roof gashed open to reveal the remnants of a dining room. A clock still hung on the wall, but most everything else lay in tatters on the sodden grass: a flower pot, socks, a festive tinsel leprechaun.

Elsewhere in the complex, Sarah Walters, 41, arrived in flip-flops and cutoff shorts to assess the damage to her mother’s house. It could have been worse, she said. But she still could not reach her mother, who had evacuated to her nurse’s house. Ms. Walters spent the storm at her own home about a mile away, with her husband and stepdaughter bracing against their front door for three hours to keep it from blowing in.

“We just have to figure out a way to fix things,” she said.

People who decided not to evacuate described harrowing escapes through chest-high floodwaters. Some made it out on a kayak or jet skied down a four-lane road. Some huddled on top of cars. Some had to flee to their second floors and watched couches and furniture float through their living rooms.

In Naples Park, Joe Lema, 76, and his wife, Joyce, 70, spent four hours trapped inside their house by the force and weight of the rising water outside. Unable to open the doors, they tried to break their expensive hurricane impact windows, to no avail. They called 911, but they were told it was too late.

“I said a lot of prayers,” Mrs. Lema said on Thursday. They had been in the evacuation zone but said nothing like this had ever happened since buying the home in 1986.

Chad Sulkes thought he had been prepared for the worst, having bought a generator, gas, food and a portable air-conditioner until Ian’s storm surge began to invade his home in Naples Park, forcing him to flee into the storm.

“There’s no items you can buy to prepare for that,” he said. “The only preparation is to leave.”

On Thursday, he returned to the house he rents on Seagull Drive to find it in complete disarray. His boat in the canal out back was sinking. All his furniture and belongings were strewn about, covered in mud. The floor was slick with mud tainted with gasoline.

Cities farther inland and along the Atlantic Coast appeared to have endured the storm’s lacerating winds with less damage than the southwestern coast where Ian first made landfall. But at points during the day, heavy rains fueled warnings from the National Weather Service of “widespread, life-threatening catastrophic flooding” in Central Florida.

At the Avante, an assisted-living facility in Orlando, rescuers sloshed through floods to evacuate the facility’s 100 residents, carrying some out on stretchers as rain and wind whirled around them. Some hospitals and nursing homes were managing to run on generator power while patients from at least 16 hospitals and an additional 3,500 nursing-home residents were evacuated from other facilities in southwestern Florida, industry officials said.

There were surreal moments of destruction mixed with normalcy. The streets of downtown Fort Myers were littered with plant matter and other debris from the surging Caloosahatchee River. But the waters had receded by Thursday afternoon and several restaurants were open and packed with people in undershirts, shorts and flip flops looking for something warm to eat.

Diane Dorsey, 57, and her family moved to Fort Myers in 2019 from Maryland, considering it a pre-retirement adventure, never imagining what devastation a hurricane could bring. When the storm sent one river rushing past the front of her house and another through the backyard, Ms. Dorsey ordered her daughter to grab the family photo albums and head upstairs.

Though their house did not sustain major damage, they were among the Floridians wondering on Thursday whether they should pack up and never return rather than risking a repeat disaster some day.

The Southwest Florida coast has swelled with new residents since Hurricane Charley, the strongest storm many people here remember, struck in 2004.

Her 18-year-old daughter, Angel Dorsey, chimed in: “I like the snow better.”