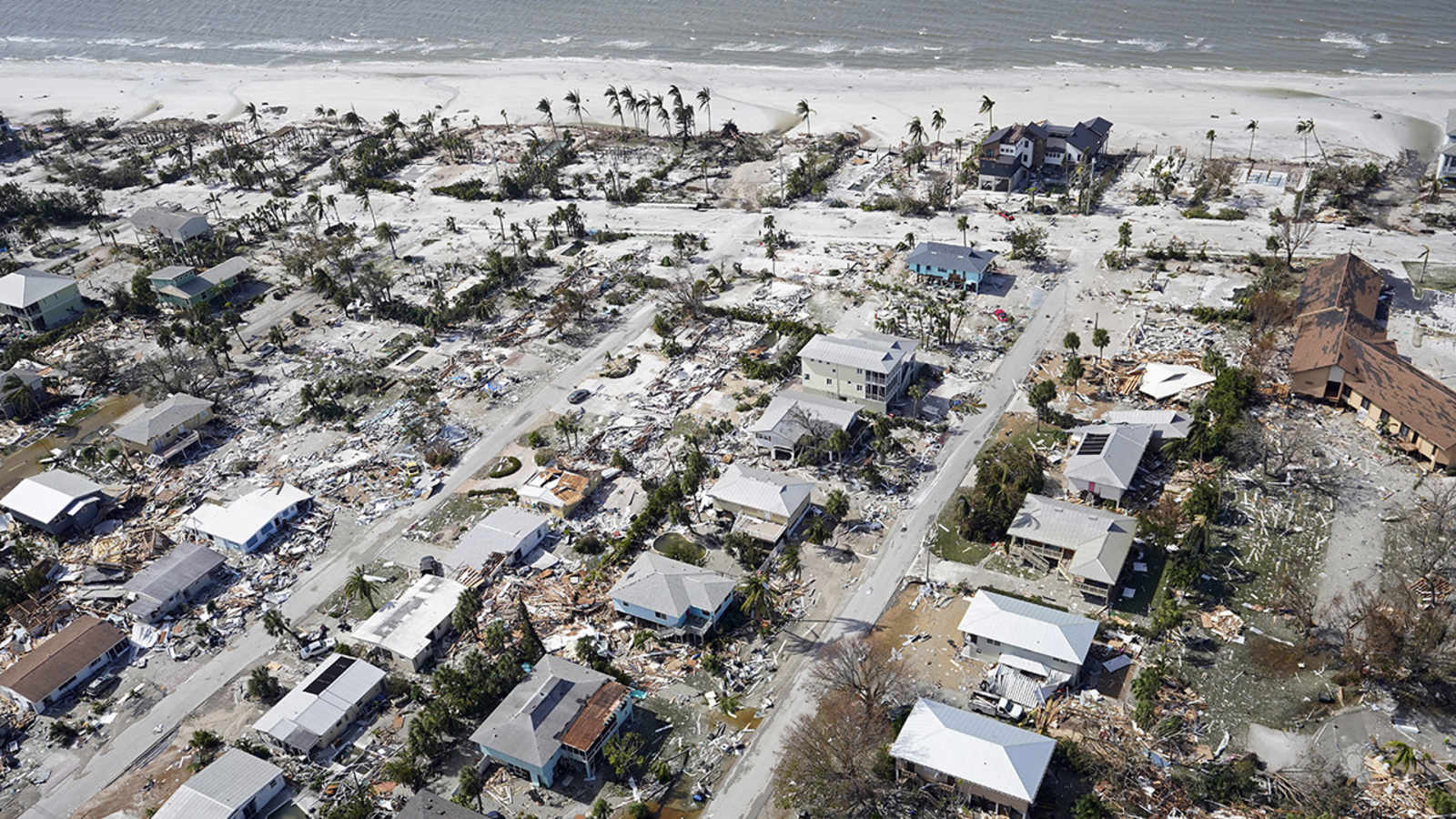 ST. PETERSBURG, Florida — Rescue crews piloted boats and waded through inundated streets Thursday to save thousands of Floridians trapped amid flooded homes and shattered buildings left by Hurricane Ian, which crossed into the Atlantic Ocean and churned toward South Carolina.

Click here for live radar and the latest forecast on Ian’s path.

Hours after weakening to a tropical storm while crossing the Florida peninsula, Ian regained hurricane strength Thursday evening over the Atlantic. The National Hurricane Center predicted it would hit South Carolina as a Category 1 hurricane Friday.

The devastation inflicted on Florida came into focus a day after Ian struck as a monstrous Category 4 hurricane, one of the strongest storms ever to hit the U.S. It flooded homes on both the state’s coasts, cut off the only road access to a barrier island, destroyed a historic waterfront pier and knocked out electricity to 2.67 million Florida homes and businesses – nearly a quarter of utility customers.

At least nine deaths were confirmed in Florida, while three other people were reported killed in Cuba after the hurricane struck the island Tuesday.

In the Fort Myers area, homes had been ripped from their slabs and deposited among shredded wreckage. Businesses near the beach were completely razed, leaving twisted debris. Broken docks floated at odd angles beside damaged boats and fires smoldered on lots where houses once stood.

“I don’t know how anyone could have survived in there,” William Goodison said amid the wreckage of the mobile home park in Fort Myers Beach where he’d lived for 11 years. Goodison rode out the storm at his son’s house inland.

The hurricane tore through the park of about 60 homes, many of them destroyed or mangled beyond repair, including Goodison’s single-wide home. Wading through waist-deep water, Goodison and his son wheeled two trash cans containing what little he could salvage – a portable air conditioner, some tools and a baseball bat.

The road into Fort Myers was littered with broken trees, boat trailers and other debris. Cars were left abandoned in the road, having stalled when the storm surge flooded their engines.

Florida Gov. Ron DeSantis said at least 700 rescues, mostly by air, have been conducted so far and involving the U.S. Coast Guard, the National Guard and urban search-and-rescue teams.

After leaving Florida as a tropical storm Thursday and entering the Atlantic Ocean north of Cape Canaveral, Ian spun up into a hurricane again with winds of 75 mph (120 kph).

A hurricane warning was issued for the South Carolina coast and extended to Cape Fear on the southeastern coast of North Carolina. With tropical-storm force winds reaching about 415 miles (665 kilometers) from its center, Ian was forecast to shove storm surge of 5 feet (1.5 meters) into coastal areas in Georgia and the Carolinas. Rainfall of up to 8 inches (20 centimeters) threatened flooding from South Carolina to Virginia.

National Guard troops were being positioned in South Carolina to help with the aftermath, including any water rescues. On Thursday afternoon, a steady stream of vehicles left Charleston, a 350-year-old city.

Sheriffs in southwest Florida said 911 centers were inundated by thousands of stranded callers, some with life-threatening emergencies. The U.S. Coast Guard began rescue efforts hours before daybreak on barrier islands near where Ian struck, DeSantis said. More than 800 federal urban search-and-rescuers were also in the area.

In the Orlando area, Orange County firefighters used boats to reach people in a flooded neighborhood. Patients from a nursing home were carried on stretchers across floodwaters to a bus.

“I was terrified,” Bartley said. “What we heard was the shingles and debris from everything in the neighborhood hitting our house.”

The storm ripped away patio screens and snapped a palm tree in the yard, Bartley said, but left the roof intact and her family unharmed.

Long lines formed at gas stations in Fort Myers and a Home Depot hardware store opened, letting in a few customers at a time.

Frank Pino was near the back of the line, with about 100 people in front of him.

“I hope they leave something,” Pino said, “because I need almost everything.”

A 72-year-old man in Deltona died after falling into a canal while using a hose to drain his pool in the heavy rain, the Volusia County Sheriff’s Office said. A 38-year-old man from Lake County died Wednesday in an accident after his vehicle hydroplaned, according to authorities.

Lee County Sheriff Carmine Marceno said his office was scrambling to respond to thousands of 911 calls in the Fort Myers area, but many roads and bridges were impassable.

Emergency crews sawed through toppled trees to reach stranded people. Many in the hardest-hit areas were unable to call for help because of electrical and cellular outages.

A chunk of the Sanibel Causeway fell into the sea, cutting off access to the barrier island where 6,300 people live.

No deaths or injuries have been confirmed in the surrounding county, and flyovers of barrier islands show “the integrity of the homes is far better than we anticipated,” said county Emergency Management Director Patrick Fuller.

South of Sanibel Island, the historic beachfront pier in Naples was destroyed, with even the pilings torn out. “Right now, there is no pier,” said Collier County Commissioner Penny Taylor.

In Port Charlotte, a hospital’s emergency room flooded and fierce winds ripped away part of the roof, sending water gushing into the intensive care unit. The sickest patients – some on ventilators – were crowded into the middle two floors as the staff prepared for storm victims to arrive, said Dr. Birgit Bodine of HCA Florida Fawcett Hospital.

A chunk of the Sanibel Causeway fell into the sea, cutting off access to the barrier island where 6,300 people live. It was unknown how many heeded orders to evacuate, but Charlotte County Emergency Management Director Patrick Fuller expressed cautious optimism.

Ian struck Florida with 150 mph (241 kph) winds that tied it for the fifth-strongest hurricane ever to hit the U.S.

While scientists generally avoid blaming climate change for specific storms without detailed analysis, Ian’s watery destruction fits what scientists have predicted for a warmer world: stronger and wetter hurricanes, though not necessarily more of them.

Copyright © 2022 by The Associated Press. All Rights Reserved.