Hurricane Ian’s Uncertain Path Keeps Much of Florida on Alert 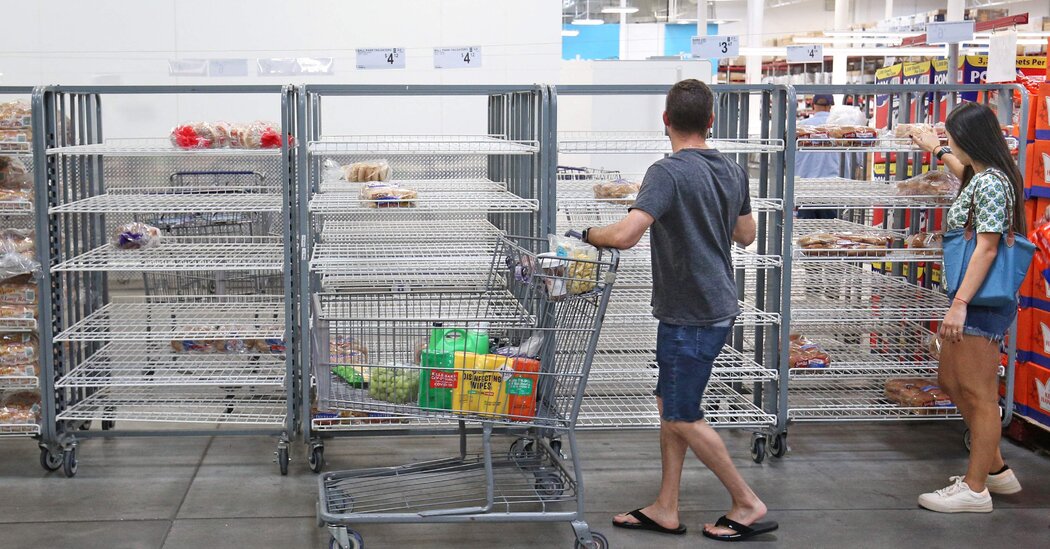 ST. PETERSBURG, Fla. — Along the Gulf Coast of Florida, whose history is punctuated by the passage and destruction of major hurricanes, millions of residents on Monday were anxiously watching forecasts, stocking up on groceries and preparing as best they could for the expected arrival of Hurricane Ian.

The authorities urged residents to begin evacuating some low-lying areas, with a troubling combination of dangerous storm surges, flooding and powerful winds predicted for the coming days.

“Safety is paramount,” Gov. Ron DeSantis said at a news briefing, asking Floridians to take the threat seriously. “There is going to be damage.”

Meteorologists said Ian would most likely become a major hurricane — meaning Category 3 or stronger, with winds of at least 111 miles per hour — as soon as Monday night as it neared Cuba. People in western Cuba were also warned to brace for punishing winds and storm surges. The storm was set to move into the Gulf of Mexico, follow a course west of the Florida Keys late on Tuesday, and approach the west coast of Florida on Wednesday.

But forecasters stressed that the track could change and that where, exactly, Ian would hit hardest could not be known.

In the Tampa-St. Petersburg area, the waters of the Gulf of Mexico were calm on Monday, under mostly sunny skies, but those same warm waters could provide the storm with much of its destructive power.

On Monday, homeowners moved lawn furniture inside and put plywood over their windows. Others made grocery runs: At least three Publix grocery stores in the St. Petersburg area ran out of bottled water, and charcoal and propane supplies were running low. Soda, Gatorade, beer and toilet paper were piled in shopping carts.

“I couldn’t have possibly bought more,” said Lauren Muskaj, 30, who was loading her S.U.V. with a large Styrofoam cooler she had bought in case the power went out. She and her husband will probably stay in St. Petersburg with their 3-month-old son, she said, because their house is not in a flood zone — but they may all end up at her parents’ home in Lakeland, farther inland.

Vacationers in the area were also jolted from their beachy bliss. Saxon Deck, a resident of Austin, Texas, who was enjoying her first vacation in a year on Pass-a-Grille Beach, a barrier island community south of St. Petersburg, woke ​up on ​Monday morning to her phone pinging. It was a real​ estate agent with whom she and her husband had planned to meet to look at houses. Instead, the agent canceled their appointment and advised Ms. Deck to get out of town.

“We naïvely thought we might be able to stay put,” ​Ms. ​Deck said.

Schools and colleges across the state began to cancel classes for the week, while the state suspended tolls in the west and cautioned residents to expect possible fuel disruptions and power failures. There was no need to “panic buy” fuel and water, Mr. DeSantis said. He also emphasized the uncertainty of the storm’s path.

“Don’t think because that eye may or may not be in your area that you’re not going to see impacts,” Mr. DeSantis said. “You’re going to see significant impacts.”

While much of the concern was focused on Florida’s west coast, Mr. DeSantis said that the east coast of Florida could also experience flooding and other effects from the anticipated 500-mile-wide storm. “This has really developed into a big storm,” he said.

At the state’s southern tip, Glenda Hoffman watched a kind of hurricane preparation unique to the Florida Keys: the towing of derelict boats that Cuban migrants had abandoned after reaching U.S. shores.

Crews were at work in Key West on Monday afternoon towing rickety vessels left behind by migrants. The barely seaworthy boats have been peppered along the Keys coastline since a recent surge in migration. Now, with Hurricane Ian approaching, they are potential projectiles.

A tiny boat nestled outside Ms. Hoffman’s building had been there three months. A tow truck company hired by Monroe County was finally getting rid of it, along with several others visible from her window.

Ms. Hoffman was not particularly concerned about the potential arrival of Ian, which is projected to skirt the Keys on its way up the Gulf Coast of Florida. No order to evacuate has been given, but Ms. Hoffman did not plan to heed one anyway.

Her condominium building is made of concrete, she said, and has windows designed to sustain 170-m.p.h. winds.

“I want to protect my property,” she said.

Hardware stores in Key West were buzzing with activity but hardly overloaded with panicked shoppers.

“We’re in the Keys; we’re mellow here,” said Ralph Gonzalez, an information technology specialist who was trying to find a way to put a 6,500-watt generator he had just purchased in the back of his S.U.V. “It’s the surge part that I’m listening about that concerns me.”

Mr. Gonzalez had not planned to buy a generator, but happened to see some at Home Depot and could not resist, despite the $899 price tag, which was still taped to the box. “I’d rather have electricity than not,” he said. “We are laid-back, but safety first.”

The need to keep a watchful eye on the storm stretched as far north as Mexico Beach, which was pummeled when Hurricane Michael hit the Panhandle as a Category 5 storm in 2018.

A friend of hers who rode out that hurricane “filmed the Driftwood through the whole storm,” Ms. Wood, 81, said, and it looked from the front as though it had survived.

“But when we got here, the whole back of it was gone,” she said on Monday. “It’s just the front wall was standing there, perfect.”

The Wood family, which has owned the Driftwood since 1975, rebuilt it and in June reopened it. The hotel has been reconfigured to withstand more serious storms. Hurricane Ian poses the first real test of its resilience.