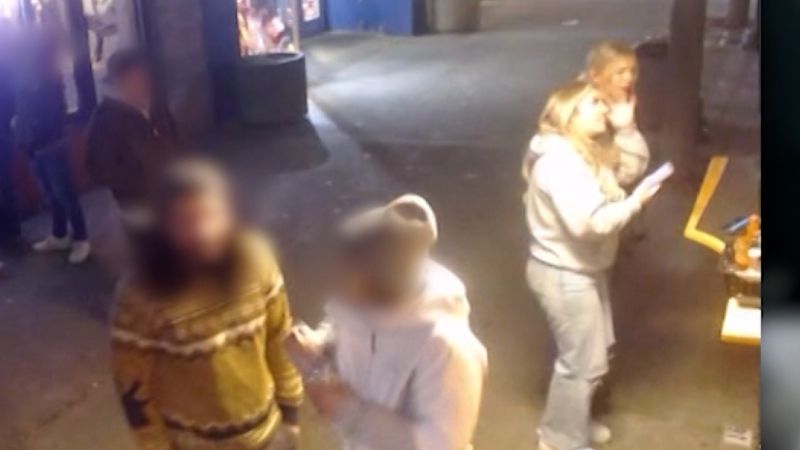 Two of the four University of Idaho students who were killed on Sunday were last seen alive ordering at a late-night food truck in Moscow, Idaho, at about 1:41 a.m., the truck’s live Twitch stream shows.

In the video, Madison Mogen and Kaylee Goncalves order $10 worth of carbonara from Grub Truckers and wait about 10 minutes for their food. As they wait, they can be seen chatting with each other and other people standing by the truck.

Joseph Woodall, 26, who manages the food truck, told CNN the two students did not seem to be in distress or in danger in any way.

The food truck video offers a helpful timeline of their final hours, Moscow Police Department Chief James Fry said Wednesday, in a quadruple murder case that remains wide open, with no suspect and no murder weapon and a reportedly bloody scene where investigators were still working Thursday.

The students – Mogen, Goncalves, Ethan Chapin and Xana Kernodle – were all found stabbed to death in their shared off-campus home on Sunday afternoon, authorities said.

Autopsies have been completed and the results will be revealed when available, an employee at the Spokane County Medical Examiner’s Office told CNN. Police on Thursday issued a release from Latah County Coroner Cathy Mabbutt listing the cause of death as homicide and the manner of death as stabbing. No autopsy details were included.

The killings and the lack of information from ammuthorities have rankled residents of Moscow, a city of 25,000 that hasn’t recorded a murder since 2015, according to state police data. Local police are working with the FBI and state police to hunt down a suspect.

Despite the lack of an arrest or suspect, Moscow police initially described the killings as a “targeted attack” and said there was no threat to the public. Fry backtracked some on Wednesday in his first news conference on the case.

“We cannot say there’s no threat to the community,” Fry said. “And as we have stated, please stay vigilant, report any suspicious activity and be aware of your surroundings at all times.”

Some students left the area days head of fall recess, which begins Monday.

“Everybody kinda went back home because they’re scared (with no suspect) caught,” student Nathan Tinno, who was planning to leave Friday after attending some classes, told CNN. “It’s definitely uneasy.”

University President Scott Green said students are encouraged to do what is right for them and they have the administration’s support.

“We have no one in custody, and the police have been unable to identify who is responsible for these homicides,” he said.

Jim Chapin, the father of Ethan Chapin, issued a statement Wednesday calling on police to release further information about the killings.

“There is a lack of information from the University of Idaho and the local police, which only fuels false rumors and innuendo in the press and social media,” he said. “The silence further compounds our family’s agony after our son’s murder. For Ethan and his three dear friends slain in Moscow, Idaho, and all of our families, I urge officials to speak the truth, share what they know, find the assailant, and protect the greater community.”

Green said they have been working with police to get information out to the public.

“We have helped when asked and continually pushed for as much information as possible, knowing we cannot interfere with the important work of a good investigation,” he said in a statement.

Police have begun to lay out a timeline of what happened in the hours leading up to the killings, though much remains unknown.

Chapin and Kernodle were at a party on campus Saturday night, while Mogen and Goncalves were at a downtown bar before they all returned to the home early Sunday sometime after 1:45 a.m., Fry said.

All four were fatally stabbed at some point in the early morning hours Sunday, Fry said, but there was no 911 call until noon. The chief didn’t reveal who called 911. The coroner’s release says the four were pronounced dead at noon.

Two additional roommates were home at the time of the deaths, neither of whom were injured nor held hostage, Green said. The two roommates have been fully cooperative with law enforcement, Idaho State Police spokesman Aaron Snell told CNN on Wednesday.

“There was other people home at that time, but we’re not just focusing just on them, we’re focusing on everybody that may be coming and going from that residence,” Fry said.

After the 911 call about an unconscious person came in, officers found the door to the home open and a gruesome crime scene.

There was “quite a bit of blood in the apartment,” Mabbutt told CNN affiliate KXLY Tuesday.

“It was a pretty traumatic scene to find four dead college students in a residence,” she said.

Just hours before their deaths, Goncalves had posted a photo of the group with the caption, “one lucky girl to be surrounded by these ppl everyday,” adding a heart emoji.

The 21-year-old from Rathdrum, Idaho, was a senior majoring in general studies and a member of the Alpha Phi sorority.

Her older sister, Alivea Goncalves, sent a statement to the Idaho Statesman on behalf of her family and Mogen’s.

“They were smart, they were vigilant, they were careful and this all still happened,” she said. “No one is in custody and that means no one is safe. Yes, we are all heartbroken. Yes, we are all grasping. But more strong than any of these feelings is anger. We are angry. You should be angry.”

Mogen, 21, was from Coeur d’Alene, Idaho, and a senior majoring in marketing. She was a member of the Pi Beta Phi sorority.

Chapin, 20, was one of three triplets, all of whom are enrolled at the University of Idaho, his family said in a statement. He was a freshman from Conway, Washington, majoring in recreation, sport and tourism management. He was a member of the Sigma Chi fraternity.

“Ethan lit up every room he walked into and was a kind, loyal, loving son, brother, cousin, and friend,” his mother, Stacy Chapin, said. “Words cannot express the heartache and devastation our family is experiencing. It breaks my heart to know we will never be able to hug or laugh with Ethan again, but it’s also excruciating to think about the horrific way he was taken from us.”

Kernodle, 20, was from Avondale, Arizona. She was majoring in marketing and was a member of Pi Beta Phi sorority.

She was “positive, funny and loved by everyone who met her,” said her older sister, Jazzmin Kernodle.

“She was so lighthearted, and always lifted up a room,” Jazzmin Kernodle said. “She made me such a proud big sister, and I wish I could have had more time with her. She had so much life left to live. My family and I are at a loss of words, confused, and anxiously waiting for updates on the investigation.”

She also offered condolences to the other victims and their families. “My sister was so lucky to have them in her life.”