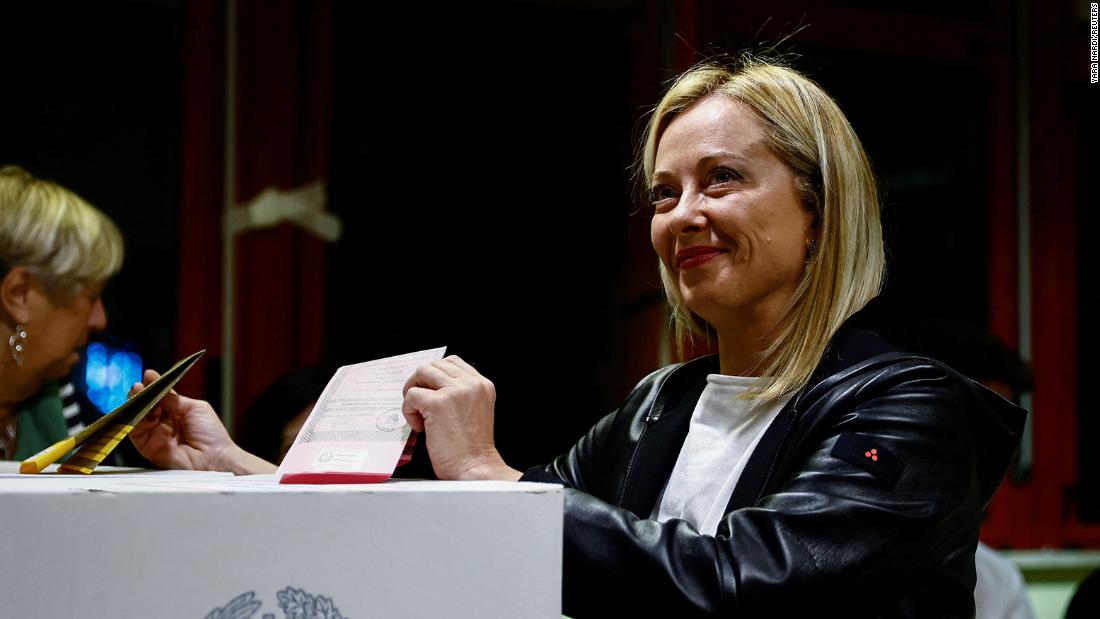 Addressing the media and supporters in the early hours of Monday morning, Meloni said it was “a night of pride for many and a night of redemption.”

“It’s a victory I want to dedicate to everyone who is no longer with us and wanted this night,” she said. “Starting tomorrow we have to show our value … Italians chose us, and we will not betray it, as we never have,” she said.

Preliminary results put an alliance of far-right parties, led by Meloni’s Brothers of Italy party, on track to win at least 44% of the vote, according to the Italian Interior Ministry.

With 63% of votes counted, the ultra-conservative Brothers of Italy party had won at least 26%, with coalition partners the League, led by Matteo Salvini, taking around 9% and Silvio Berlusconi’s Forza Italia scoring over 8%. Final results are expected later Monday, but it’s expected to take weeks for a new government to be formed.

Meloni’s Brothers of Italy party — whose origins lie in post-war fascism — has seen an astronomical rise in popularity in recent years, having won just 4.5% of the vote in the last elections, in 2018.

The party’s popularity underscores Italy’s longstanding rejection of mainstream politics, seen most recently with the country’s support of anti-establishment parties such as the Five Star Movement and Salvini’s League.

Celebrating the early results on Sunday evening, Salvini said on Twitter, “Center-right in clear advantage both in the House and in the Senate! It will be a long night, but already now I want to say THANK YOU.”

Meloni, a 45-year-old mother from Rome who has campaigned under the slogan “God, country and family,” leads a party whose agenda is rooted in Euroskepticism, anti-immigration policies, and one that has also proposed curtailing LGBTQ and abortion rights.

The preliminary results showed the center-left coalition, led by the left-wing Democratic Party and centrist party +Europe had won at least 26% of the vote, while former prime minister Giuseppe Conte’s bid to revive the Five Star Movement appeared to have been unsuccessful, with around 15%.

“Undoubtedly we cannot, in light of the data seen so far, not attribute the victory to the right dragged by Giorgia Meloni. It is a sad evening for the country,” Debora Serracchiani of the Democratic Party told reporters.

Voters headed to the polls amid a number of new regulations, with voting hours also contained to one day rather than two.

Other changes included a younger voting age for the Senate and a reduction in the number of seats to elect — down from 685 seats to 400 in the Senate and from 315 to 200 in the lower House of Parliament. That parliament is scheduled to meet on October 13, at which point the head of state will call on party leaders to decide on the shape of the new government.

The buildup to the election was dominated by hot-button issues including Italy’s cost-of-living crisis, a 209-billion euro package from the European Covid recovery fund and the country’s support for Ukraine.

Meloni differs from coalition partner leaders Berlusconi and Salvini on a number of issues, however, including Ukraine, and has no connection to Russian President Vladimir Putin, unlike the pair, who have said they would like to review sanctions against Russia because of their impact on the Italian economy. Meloni has instead been steadfast in her support for defending Ukraine.

The incoming prime minister — the sixth in just eight years — will be tasked in tackling those challenges, with soaring energy costs and economic uncertainty among the country’s most pressing.

And while Meloni is slated to make history as Italy’s first female prime minister, her politics do not mean that she is necessarily interested in advancing women’s rights.

Emiliana De Blasio, adviser for diversity and inclusion at LUISS University in Rome told CNN Meloni is “not raising up at all questions on women’s rights and empowerment in general.”

Sunday’s results come as other far-right parties in other European countries have marked recent gains, including the rise in Sweden’s anti-immigration party, Sweden Democrats — a party with neo-Nazi roots — who are expected to play a major role in the new government after winning the second largest share of seats at a general election earlier this month.

And in France, while far-right ideologue Marine Le Pen lost the French presidential election to Emmanuel Macron in April, her share of the popular vote shifted France’s political center dramatically to the right.

In a social media post early Monday, Meloni dedicated her projected win to “all the militants, managers, supporters and every single person who — in these years — has contributed to the realization of our dream, offering soul and heart spontaneously and selflessly.”

She added: “We won’t betray your trust. We are ready to lift Italy up.”