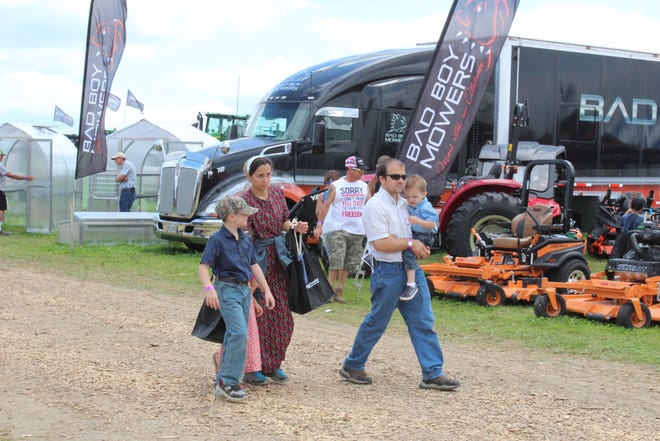 LOYAL, Wis. – In the spring of 2020, Arnie Jennerman was named to succeed Matt Glewen as the general manager of Wisconsin Farm Technology Days, and was scheduled to work with Glewen over a two-year transition period.

But then COVID-19 intervened, and the 2020 show was canceled. The two worked together overseeing the 2021 show in Eau Claire County, but this year Jennerman had full control of the reins as the show moved to Clark County.

Wisconsin State Farmer spoke with Jennerman just a couple of hours after the event got underway on the Dennis and Suzie Roehl farm south of Loyal, and he was quick to acknowledge the work of the local volunteers. “This is the first one where I’ve been on my own,” he said. “But the people in the host county do most of the work putting the show together, and they’ve done a great here in Clark County.”

Jennerman’s varied background and talents seem to make him well suited to lead Wisconsin Farm Technology Days into the future. His roots in agriculture run deep. Growing up on a Wisconsin dairy farm, he has fond memories of attending many what were then called “Farm Progress Days” with his family.

In recent years he volunteered at the Dane County Wisconsin Farm Technology Days show held at the Statz Farm. He has also served as a volunteer at World Dairy Expo. He currently owns farmland that is mostly rented out to neighboring dairy and crop farmers.

A Wisconsin native and current Verona resident, Jennerman has served as Interim Executive Director of the UW Madison Student Health Services, and worked in a number of technology-related management positions at UW Madison. He also has spent over 25 years in the private sector, working in manufacturing, distribution, healthcare and accounting, where he served clients in the milk, cheese and feed manufacturing industry. His background is in management and finance with an MBA in marketing from UW-Madison.

Having faced the challenges of COVID that forced cancellation of the 2020 show, and with a slightly smaller number of exhibitors in 2021, Jennerman says more exhibitors have returned this year.

“Last year we had to shrink the grounds a little bit. Truthfully, many of the exhibitors stayed away not so much because of COVID but because they couldn’t get equipment or enough people to staff their booths. That’s also been a challenge this year, but from the looks of things, they’ve found equipment to put on the grounds,” he observed.

“We still had a great show in 2021, with great attendance. Trade shows, especially outdoor shows, have recovered pretty well from COVID,” he noted.

“The committee was determined to have field demonstrations this year after a four-year absence, and they worked early with the vendors to get equipment lined up for the field demos that include: mowing, merging, forage harvesting, raking, making baleage and bale wrapping,” Jennerman explained.

He noted that around 10 companies had committed to participate in the field demonstrations, including bringing triple mowers and three large forage harvesters.

“We also had representatives from the equipment manufacturers talk about their machines, and then take them out to the field to demonstrate them,” he said.

Jennerman says farm safety was a big part of this year’s show. “We featured training on grain bin safety because entrapment in the bins is a huge issue, and there was also a tractor rollover demonstration.”

He stressed that farming remains one of the most hazardous occupations. “Sadly children who are on the farm doing a lot of mature things are often the victims of these injuries. Sometimes the bigger farm equipment posses bigger dangers for those working on farms,” Jennerman said.

Although farming has changed a lot, Jennerman says the risks are still there with equipment, chemicals and other thing. “We want these youngsters to grow up to be our farmers of the future,” he said.

Jennerman pointed out that while technology has brought many changes to Wisconsin farms, many things remain the same. “The theme of this year’s show was “Tradition and Technology Meet,” he said. “As much as we adapt to the new technology on our farms, we still appreciate the past – and especially the people who were involved in farming over the generations.”

He emphasized that to be successful in farming has always required special people, and especially families. “You really have to love farming. It’s one of those occupations that’s about much more than money. You have to love the life and really be dedicated to that,” said Jennerman.

“We really see that with the host family and the visitors who bring their families to the show. Farming is a real family endeavor, and especially when you get to work with multiple generations. That remains a unique thing about working in agriculture,” he said.

The 2023 Wisconsin Farm Technology Days show will not be held on a family farm. Instead, the event will be held at the Badger Steam & Gas Engine Club’s grounds July 18-20, which is conveniently located just off Interstate 90/94 at Exit 92 in Wisconsin Dells.

Chippewa County has been selected to host 2024 Wisconsin Farm Technology Days. The county also hosted the 2004 in September of that year.