Jill Biden on President Joe Biden’s hindered progress: ‘He had so many hopes’

Jul 16, 2022 Jill Biden on President Joe Biden's hindered progress: 'He had so many hopes' - CNNPolitics, Politics 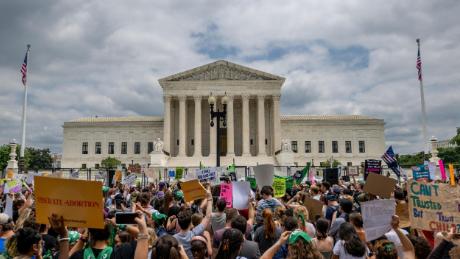 The first lady said during the event in Nantucket, Massachusetts, that her husband has been consistently challenged by unanticipated crises while in office, placing blame on global woes. Biden’s remarks came as the President’s job approval rating stands at 33% according to a recent New York Times and Siena College poll, which also noted just 13% of Americans say the country is heading in the right direction

“[The President] had so many hopes and plans for things he wanted to do, but every time you turned around, he had to address the problems of the moment,” said Biden, speaking to about two dozen attendees at a private home on the popular vacation island off the coast of Massachusetts.

Biden also announced she expects to meet next week with Olena Zelenska, the first lady of Ukraine, with whom she last met in May during an unannounced trip into Ukraine. She did not elaborate on the agenda for her upcoming meeting, and CNN has reached out to Biden’s office for more details.
On the domestic front, Biden noted gun violence, the Supreme Court’s momentous decision on Roe v. Wade and the war in Ukraine as problems the President did not anticipate.

“He’s just had so many things thrown his way,” she said. “Who would have ever thought about what happened [with the Supreme Court overturning] Roe v Wade? Well, maybe we saw it coming, but still we didn’t believe it. The gun violence in this country is absolutely appalling. We didn’t see the war in Ukraine coming.”

Biden said she, too, felt hamstrung in her role as first lady, and had been unexpectedly pulled in other directions from the course she initially intended.

“I was saying to myself, ‘Okay, I was second lady. I worked on community colleges. I worked on military families. I’ve worked on cancer.’ They were supposed to be my areas of focus. But then when we got [in the White House,] I had to be, with all that was happening, the first lady of the moment.”

The first lady shared her frustration about the overturning last month of Roe v. Wade, which ended the federal constitutional right to an abortion. Biden added that while she supported the right to protest, being angry about the decision, in her opinion, is not enough — contradicting the President’s remarks last week, where he encouraged women to “keep protesting,” adding protesting is “critically important.”

Biden said she told her own family members they should think about doing more than protesting.

The White House has acknowledged a path forward to reinstate abortion rights is narrow, and at this time, undetermined.
Biden also slammed Congress during her remarks, blaming the administration’s stalled agenda on Republicans. Joe Biden’s sweeping Build Back Better plan — which would have expanded the nation’s social safety net — was served its latest blow this week when West Virginia Sen. Joe Manchin, a moderate Democrat, dismissed including any climate or tax provisions in the bill. In a narrowly divided Senate, Democrats needed Manchin’s support to pass the legislation along party lines in a process called budget reconciliation, which requires all 50 members of the Democratic caucus to agree to advance legislation.

“I know there are so many nay-sayers who say we’ll get slammed in the midterms. Okay. The Republicans are working hard, they stick together, for good or evil. So, we just have to work harder,” she said.

Saturday’s event marked the second DNC fundraiser the first lady has attended during a two-day swing to Massachusetts. On Thursday, she made remarks, predominantly focused on political action, at a private event in Andover.