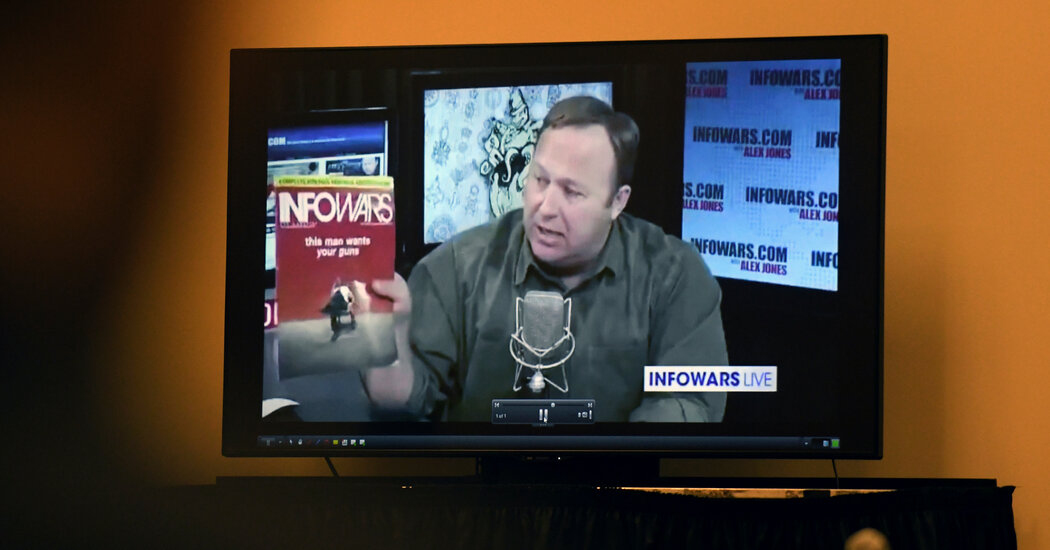 Judge Christopher Lopez dismissed Mr. Jones’s attorney and chief restructuring officer in the bankruptcy of Free Speech Systems, Infowars’ parent company, and expanded the duties of a Department of Justice-appointed trustee already monitoring the case. The judge authorized the trustee to hire additional legal and other help, specifying that any new hires must have “no connection to any of these cases,” he said, citing a need to investigate “insider relationships.”

“There has to be greater transparency in this case,” Judge Lopez said during the hearing on Tuesday, pointing to concerns with spending and other disclosures on the part of the company, which is run by Mr. Jones. “Without transparency, people lose faith in the process,” he added, referring to the federal bankruptcy system.

The lawyer and restructuring officer were together attempting to reorganize the company as part of the bankruptcy. In dismissing them, the judge did not fault their work, but rather cited a “lack of candor” on the part of the company, whose moves are dictated by Mr. Jones.

Mr. Jones put Free Speech Systems into bankruptcy in late July and has said he owes $54 million to PQPR, an entity owned and operated directly and indirectly by Mr. Jones and his parents. He filed the bankruptcy partly in response to ongoing litigation against him by the family members of 10 Sandy Hook victims, who say the bankruptcy is a gambit to prevent them from collecting what promise to be heavy financial damages in the cases.

Understand the Cases Against Alex Jones

A united front. Alex Jones, a far-right conspiracy theorist, is the focus of a long-running legal battle waged by families of victims of a mass shooting at Sandy Hook Elementary School in Newtown, Conn., in 2012. Here is what to know:

Defamation lawsuits. The families of 10 Sandy Hook victims sued Mr. Jones in four separate lawsuits. The cases never made it to a jury; Mr. Jones was found liable by default in all of them because he refused to turn over documents, including financial records, ordered by the courts over four years of litigation.

Mr. Jones’s line of defense. The Infowars host has claimed that his right to free speech protected him, even though the outcome of the cases was due to the fact that he failed to provide the necessary documents and testify.

Three new trials. A trial in Austin, Texas this July was the first of three that will determine how much Mr. Jones must pay the families of the Sandy Hook victims. The other two are scheduled for September, but are on hold after Mr. Jones put the Infowars parent company, Free Speech Systems, into Chapter 11 bankruptcy last week, halting all pending litigation.

Compensatory and punitive damages. On Aug. 4, a jury in the Texas trial awarded the parents of one of the children killed in the mass shooting more than $4 million in compensatory damages, which are based on proven harm, loss or injury. A day later, jurors decided Mr. Jones must pay the parents $45.2 million in punitive damages, which aim to punish especially harmful behavior and tend to be granted at the court’s discretion.

The families filed four separate defamation lawsuits against Mr. Jones after he spent years spreading lies that the Dec. 14, 2012, shooting that killed 20 first graders and six educators at Sandy Hook Elementary School in Newtown, Conn., was a government pretext for gun control and that their relatives were actors in the plot. People who believed Mr. Jones’s false claims have tormented the families online, confronted them on the street and threatened their lives.

Mr. Jones lost all four cases last year. Judges in Texas and Connecticut ruled him liable by default after he refused to comply with discovery orders. The families’ victories in those lawsuits set the stage for three trials for damages, after two of the cases were combined. In the first, in August, a jury awarded Neil Heslin and Scarlett Lewis, parents of the Sandy Hook victim Jesse Lewis, 6, compensatory and punitive damages of nearly $50 million. The second is in progress in Superior Court in Waterbury, Conn., resulting from a lawsuit filed by the families of eight other victims.

Mr. Jones is in Connecticut and is expected to testify in the damages trial this week. On Tuesday, Judge Lopez cited Mr. Jones’s spending of $80,000 for “security” for his trip to Connecticut as one of the questionable expenses prompting his decision to impose additional oversight. Mr. Jones has also run up tens of thousands of dollars in credit card debt, according to his court filings.

“This was a monumental step in increasing the transparency around a bankruptcy that Jones and his proxies have until now been keeping in the dark,” said Avi Moshenberg, who is representing the Sandy Hook families in a separate lawsuit against Mr. Jones.

In a filing to the bankruptcy court in late August, the families accused Mr. Jones of funneling assets from his business to himself and his relatives. The Sandy Hook families said in the filing that Mr. Jones had siphoned nearly $62 million from his business into financial vehicles benefiting himself and his family beginning in 2018, when the Sandy Hook families first filed suit.

Mr. Jones’s $54 million debt to PQPR is fictional, the families’ lawyers said in the August filing, calling the claim “a centerpiece of Jones’s plan to avoid compensating the Sandy Hook families.”