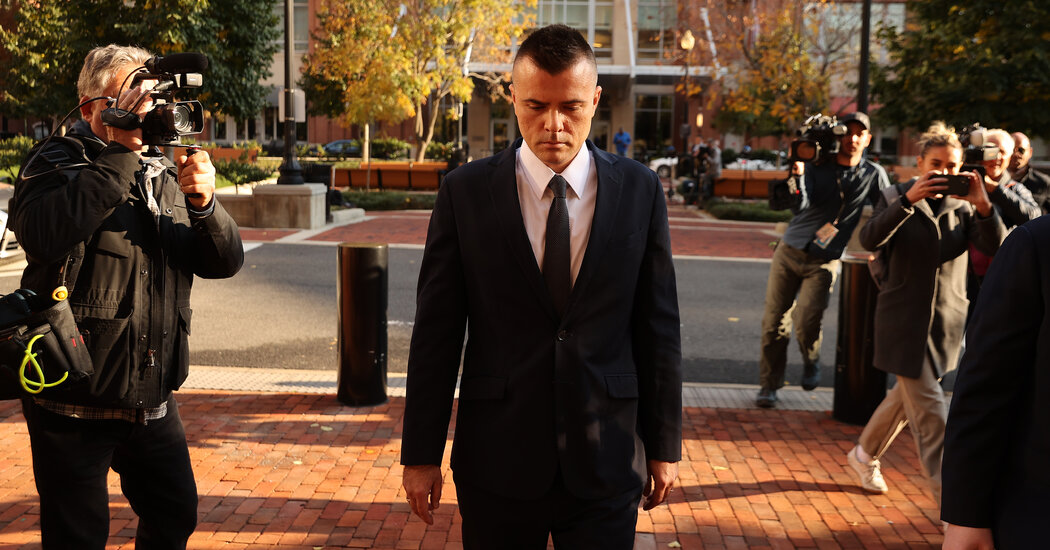 ALEXANDRIA, Va. — A Trump-era special prosecutor and a defense lawyer delivered starkly clashing views in closing arguments on Monday about the motives of Igor Danchenko, a Russia analyst who was a key contributor to the so-called Steele dossier.

A jury will now decide whether Mr. Danchenko is guilty of lying to the F.B.I. about one of his sources for information in the Steele dossier, a compendium of unsubstantiated assertions that Donald J. Trump and his 2016 campaign were colluding with Russia.

The case is a major test of the special counsel, John H. Durham, who was appointed in 2019 to investigate the origins of the F.B.I.’s inquiry into the nature of the Trump campaign’s ties to Russia. An earlier indictment brought by Mr. Durham ended with an acquittal in May, and the trial appears to be his last chance to obtain a conviction in a case he developed.

In the closing arguments, a prosecutor working for Mr. Durham asserted that Mr. Danchenko had clearly lied to the F.B.I. and that his false assertions had a material effect. He pointed to part of the dossier that the F.B.I. cited to bolster applications to wiretap a former Trump campaign adviser with ties to Russia.

In his own remarks, Mr. Durham sought to broaden the case, telling jurors that “the whole house of cards of the dossier crumbles” under the weight of the evidence.

But the defense said the government’s own evidence showed that Mr. Danchenko did not lie. The lawyer, Stuart A. Sears, characterized Mr. Danchenko as a valuable and honest asset to the F.B.I. who unwittingly became embroiled in a politically charged investigation. Mr. Durham, he said, was intent on proving crimes “at any cost” and presumed Mr. Danchenko guilty from the start.

What to Know About the Trump Investigations

Numerous inquiries. Since leaving office, former President Donald J. Trump has been facing several investigations into his business dealings and political activities. Here is a look at some notable cases:

Jan. 6 investigations. In a series of public hearings, the House select committee investigating the Jan. 6 attack laid out a comprehensive narrative of Mr. Trump’s efforts to overturn the 2020 election. This evidence could allow federal prosecutors, who are conducting a parallel criminal investigation, to indict Mr. Trump.

Georgia election interference case. Fani T. Willis, the Atlanta-area district attorney, has been leading a wide-ranging criminal investigation into the efforts of Mr. Trump and his allies to overturn his 2020 election loss in Georgia. This case could pose the most immediate legal peril for the former president and his associates.

“He’s trying to help the F.B.I., and now they’re indicting him for it,” Mr. Sears said.

After BuzzFeed published the dossier in 2017, public suspicions of Mr. Trump escalated, but it has since been discredited — in part because Mr. Danchenko told the F.B.I. that its author, the former British intelligence agent Christopher Steele, had exaggerated gossip that Mr. Danchenko had gathered for him.

Mr. Trump and his supporters have falsely sought to conflate the dossier with the official investigation into Mr. Trump’s ties to Russia, but the F.B.I. did not open the inquiry based on the dossier and the final report by the special counsel, Robert S. Mueller III, did not cite anything in it as evidence.

The F.B.I. pointed to part of the dossier in applying to wiretap the former Trump campaign adviser. An inspector general’s investigation uncovered that the bureau had continued to do so after talking to Mr. Danchenko without informing a surveillance court that there was reason to doubt the dossier’s credibility.

The dossier was political opposition research indirectly funded by Hillary Clinton’s 2016 campaign and the Democratic National Committee. They paid a law firm, which paid a research firm, which in turn subcontracted to a company run by Mr. Steele. Mr. Steele hired Mr. Danchenko to canvass contacts in Russia and Europe about Mr. Trump’s business dealings in Russia.

Mr. Danchenko verbally conveyed rumors that Mr. Trump’s campaign was colluding with Russia and that Russia had a blackmail tape of Mr. Trump with prostitutes in a hotel room in Moscow. But during an interview with the F.B.I., Mr. Danchenko said that he first saw the dossier when BuzzFeed published it and that Mr. Steele had exaggerated his statements, portraying uncorroborated gossip and speculation as fact.

The F.B.I. made Mr. Danchenko a paid confidential source and he disclosed his sourcing for the rumors. While he did not provide information substantiating the dossier, the trial has shown that the bureau found his network of contacts valuable for identifying unrelated Russian influence operations in the United States.

But in November 2021, Mr. Durham charged Mr. Danchenko with making false statements to the F.B.I. about two of his sources for claims in the dossier.

The special counsel said Mr. Danchenko lied when he said he never “talked” to Charles Dolan, a Democratic lobbyist, about anything in the dossier even though Mr. Dolan had emailed him information about a minor claim about office politics in the Trump campaign that appeared in the dossier.

Mr. Danchenko is also accused of lying four times to the F.B.I. when he repeatedly said that he believed a person who had called in July 2016 and provided information without identifying himself was likely Sergei Millan, a former president of the Russian-American Chamber of Commerce.

The trial, which began last week, concluded much earlier than anticipated after the judge overseeing the case excluded much of the material that Mr. Durham had wanted to showcase, including the purported blackmail tape.

Mr. Durham faced additional setbacks. Two witnesses for the prosecution, both F.B.I. agents, seemed to undermine the prosecution’s case during their testimony, including by stating that Mr. Danchenko’s assertion that he had not talked to Mr. Dolan about Trump campaign office politics was “literally true” since it was made in an email.

On Friday, Judge Anthony Trenga dismissed the charge concerning Mr. Dolan before it could go to the jury, saying Mr. Durham had failed to present sufficient evidence.

Judge Trenga reserved judgment for now on a request from the defense to throw out the remaining four charges that involve the purported call from a person he said he believed to be Mr. Millian.

The prosecution stressed that traditional phone records did not show evidence of such a call, but the defense suggested that it could have unfolded over an app.

The prosecution also pointed to an email Mr. Danchenko sent to Mr. Millian that made no mention of an earlier call or missed meeting. But an F.B.I. agent testified that it was reasonable for an email to omit such a reference if Mr. Danchenko believed the caller was seeking anonymity.

At one point on Monday, Mr. Durham defended his work and rebuked the F.B.I. for its handling of the Russia investigation — prompting the judge to ask him to speed up his remarks.

“It’s not an illogical question to ask, ‘Well, how did this start?’” Mr. Durham said, after claiming that Mr. Mueller concluded that there was “no collusion” between the Trump campaign and Russia.

“You should finish up,” Judge Trenga interjected.

The Russia investigation in fact began after a diplomat suggested a Trump campaign adviser may have had inside information about Russia’s breach of Democratic emails.

Mr. Mueller did not find evidence sufficient to charge any Trump associate with a criminal conspiracy with Russia. But his March 2019 report detailed “numerous links between the Russian government and the Trump campaign” and established that each perceived it would benefit from the other.