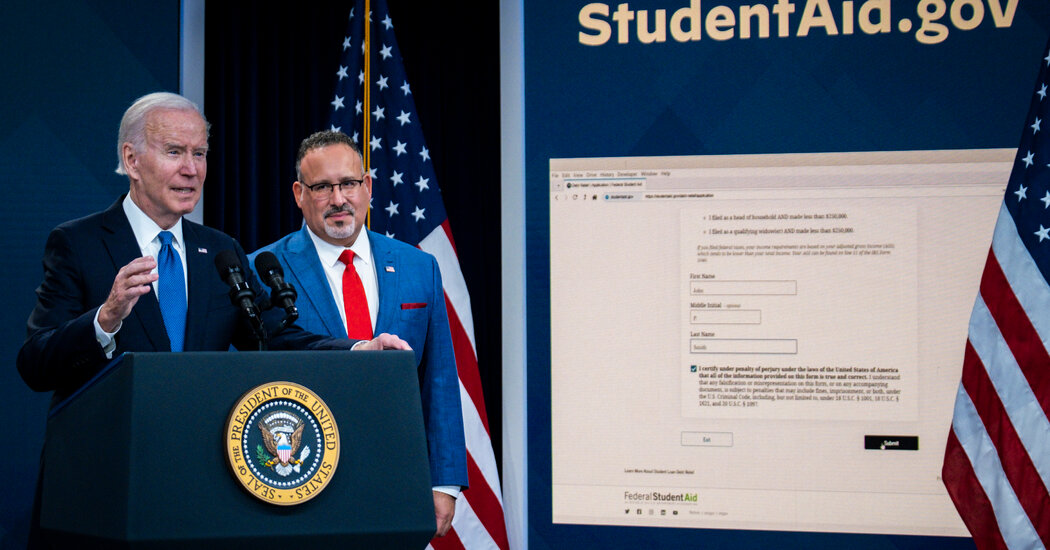 WASHINGTON — Attempts to block President Biden’s student debt relief programs were dealt dual setbacks on Thursday, as a federal judge in Missouri and Justice Amy Coney Barrett rejected challenges to the sweeping measure, one that could cost the government hundreds of billions of dollars.

Judge Henry E. Autrey of the Federal District Court in St. Louis dismissed the more prominent of the two lawsuits, one brought by six Republican-led states. The suit accused Mr. Biden of overstepping his authority under a 2003 federal law that allows the education secretary to modify financial assistance programs for students “in connection with a war or other military operation or national emergency.”

The plan cancels $10,000 in debt for those earning less than $125,000 per year, or $250,000 per household, and $20,000 for those who received Pell grants for low-income families. The nonpartisan Congressional Budget Office said last month that it estimated the plan’s price tag at $400 billion, and the Education Department followed a few days later with a similar estimate of $379 billion over the life of the program.

Judge Autrey, who was appointed by President George W. Bush, did not rule on the larger issue in the lawsuit, which was brought by Nebraska, Missouri, Arkansas, Iowa, Kansas and South Carolina. Instead, he said the states had not suffered injuries of the sort that gave them standing to sue.

“While plaintiffs present important and significant challenges to the debt relief plan,” the judge wrote, “the current plaintiffs are unable to proceed to the resolution of these challenges.”

The states said they planned to appeal.

The states’ case was viewed as the most significant threat to Mr. Biden’s plan, and Judge Autrey’s ruling allowed the government to start discharging loans as soon as Sunday. More than 12 million people have applied for debt cancellation since the application portal opened late last week.

Other legal challenges remain, including a lawsuit backed by the Job Creators Network, a right-leaning trade group of business owners. A hearing on their request for an injunction is scheduled to be held on Tuesday before a federal judge in Fort Worth.

In a second development on Thursday, Justice Barrett rejected a separate challenge to the debt relief program, this one from a taxpayers’ association in Wisconsin.

Justice Barrett denied the association’s challenge without comment, which is the court’s custom in ruling on emergency applications. She acted on her own, without referring the application to the full court, and she did not ask the administration for a response. Both of those moves were indications that the application was not on solid legal footing.

Although she did not say so, Justice Barrett most likely rejected the application because the plaintiff, the Brown County Taxpayers Association, appeared to lack standing.

Judge William C. Griesbach of the Federal District Court in Green Bay, Wis., had dismissed the association’s case without addressing whether Mr. Biden had acted lawfully. Instead, Judge Griesbach, who was appointed by Mr. Bush, ruled that the association had failed to show that it had standing to sue.

The Supreme Court has said that the mere payment of taxes does not give plaintiffs standing to challenge government programs. “If every federal taxpayer could sue to challenge any government expenditure, the federal courts would cease to function as courts of law and would be cast in the role of general complaint bureaus,” Justice Samuel A. Alito Jr. wrote in 2007.

The court has carved out a narrow exception for some religious challenges, though Judge Griesbach noted that even that exception “has been the subject of much criticism.”

He rejected the group’s request to expand the exception to allow the challenge to the student loan program. “This court certainly has no authority to do so,” he wrote.

Judge Griesbach also questioned whether an injunction stopping the program would be warranted even if the challenger had standing. If the administration acted unlawfully, he wrote, people who obtain debt relief might again be liable for forgiven debts.

“A future administration may not be bound” by the Biden administration’s program, the judge wrote, “and may seek to collect the purportedly forgiven debts.” Judge Griesbach added that “those seeking to take advantage of the program” may want “to consider this possibility before placing undue reliance on the benefits promised.”

A three-judge panel of the U.S. Court of Appeals for the Seventh Circuit, in Chicago, refused to intervene in an unsigned order that gave no reasons. Justice Barrett oversees that circuit, and emergency applications concerning its rulings are addressed to her in the first instance.

In its application, the association argued that the sums involved warranted loosening the standing rules. “We are witnessing a gargantuan increase in the national debt accomplished by a complete disregard for limitations on the constitutional spending authority,” the association’s lawyers wrote.

They added: “The argument that a president may unilaterally forgive debt owed to the U.S. Treasury through executive fiat, and that no one has standing to challenge him, threatens the very foundations of a constitutional republic.”