Justice Department probe may be aiming squarely at Trump 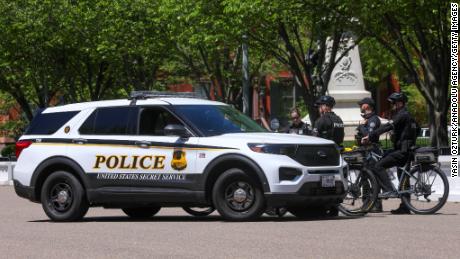 These developments, which are the clearest indication yet that Trump is in the investigation’s sights, suggest the effort to find the truth will survive even if Republicans win the House this fall and shut down the select committee. Unlike the House investigation, the Justice Department would be able to bring criminal charges against former Trump administration officials if it chooses.

It follows that the department is seeking to litigate executive privilege claims that Trump is likely to make in an effort to thwart the investigation. This also suggests that the department, after months of complaints from House select committee members and others that it was not acting quickly enough, is moving with alacrity.

Evidence of an expanding Justice Department investigation came amid new signs of the political power of Trump’s false claims of election fraud. Candidates touting his falsehoods won Republican primaries in Arizona and Michigan on Tuesday, and could be in a position to influence future elections if they beat Democratic rivals in November.
And the probe is also unfolding amid a widening controversy over texts missing from government phones used by the Defense Department and the US Secret Service during the period around January 6, 2021. CNN reported on Wednesday, for example, that the Secret Service may temporarily disable text messaging on employee cell phones as the agency scrambles to respond to concerns it may have erased messages. The disappearance of messages could be coincidental, but given the explosive post-election events, it’s raised suspicion.

Both Cipollone and Philbin were subpoenaed, sources familiar with the matter told CNN. They were both close to Trump inside the White House in the fraught days after the 2020 election and in the run-up to the Capitol insurrection. The department sought their testimony after the grand jury also heard from two key members of former Vice President Mike Pence’s brain trust, his former chief of staff Marc Short and legal counsel Greg Jacob.

Cipollone has also been a key figure in the House committee’s televised hearings, which have used him to highlight the potential illegality of Trump’s actions and refusal to intervene to quash the Capitol riot. The committee’s star witness, Cassidy Hutchinson, an aide to former White House chief of staff Mark Meadows, testified that Cipollone warned staff could be charged with countless crimes if they let Trump go to the Capitol on January 6.

In his own deposition before the committee, Cipollone declined to divulge details of his personal conversations with the then-President on privilege grounds. But with its longer timeline and resources, the Justice Department may have more power to overcome this obstacle, either in negotiations with Cipollone or through the courts.

Trump may be the focus of investigators

Until it emerged that Cipollone and Philbin and the two key Pence aides were sought for grand jury testimony, it was not possible to establish whether the department was looking directly at the ex-President’s role in disrupting the peaceful transfer of power. But given the proximity of the two White House counsels, in particular, to the then-President, the line of inquiry now appears much clearer.

“You don’t call in the White House counsel, the deputy White House counsel, particularly in the wake of the testimony that they gave to the 1/6 committee, unless you are looking squarely and directly at Donald Trump,” Preet Bharara, a former US attorney for the Southern District of New York, told CNN’s Jake Tapper on “The Lead” on Wednesday.

Cipollone and Philbin could give investigators insight into Trump’s statements, actions and state of mind on one of the most perilous days in American history. That could be important to establishing whether he had corrupt intent to break the law. Cipollone’s testimony might also be threatening to Trump if executive privilege constraints are lifted since he has a reputation for integrity and telling the truth.

Among other revelations, Cipollone told the House select committee in closed-door videotaped testimony that he thought Trump should have conceded the election and that Pence deserved the Presidential Medal of Freedom for not aiding the effort to overturn the election in Congress.

A legal battle is brewing

Any appearance by Cipollone would, however, probably have to await a court battle on executive privilege, which allows a president to get private advice on key issues and cases and expect that it will be protected from inquiries from Congress under the doctrine of separation of powers.

CNN’s Pamela Brown reported on Tuesday that Cipollone and his attorneys were in discussions with Justice Department officials about a grand jury appearance and how to deal with executive privilege issues. Trump has repeatedly made vast claims of executive privilege that stretch to advisers and communications far beyond conventional understandings of its scope — and he’s likely to do so again.

Potentially, a court fight over Cipollone testimony could go all the way up to the Supreme Court. During the Watergate scandal, then-President Richard Nixon asserted executive privilege to try to prevent the handover of incriminating audio tapes. But in a ruling that could be significant in Trump’s case, the Supreme Court said that executive privilege could not be used to thwart the administration of criminal justice. In addition, the courts do not have a long track record of rulings on how far a former President can go with executive privilege, so any legal contest between Trump and the Department of Justice could cover significant new ground.

The House January 6 committee did not litigate the question of Cipollone’s reluctance to talk about certain conversations with Trump. It is racing against a ticking clock since it is likely to be disbanded by pro-Trump Republicans in the House if control of the chamber changes after the midterm elections in November. But the Justice Department has the luxury of more time to conduct a legal fight.

“I am optimistic that the Department of Justice can win this,” former federal prosecutor Shan Wu said on CNN’s “The Situation Room” Wednesday, cautioning, however, that it could take months for a legal process to be resolved.

That means a Justice Department investigation could go on well into next year at least. So even if the congressional probe expires, there will be at least one venue in which Trump could face accountability.

This possibility of a prolonged investigation is one reason many observers believe Trump is leaning toward an early announcement of a 2024 presidential campaign. This would make it easier for the former President to argue that the investigation is a politicized attempt by the Biden administration to weaponize the Justice Department to try to keep him from reclaiming the White House.

Still, evidence of investigation does not mean proof of guilt. While the revelations of the televised House hearings have been shocking, and demonstrated a higher involvement by the ex-President in the January 6 coup attempt than was previously known, Attorney General Merrick Garland would still face a profound dilemma in deciding whether to prosecute the ex-President.

The House committee’s hearings have painted a damning picture, but they have also cherry picked from depositions and available evidence and did not include cross-examinations that could pick holes in witness testimony.

A criminal case requires a higher bar of proof than a congressional inquiry. The gravity of prosecuting a former President suggests that Garland would have to be especially convinced of getting a conviction. A criminal case against Trump would also raise the question of whether such a process, which could rock the United States to its core and set precedents for future former Presidents, is truly in the national interest, however damning the evidence.

Conversely, establishing a principle that a President could evade legal accountability for trying to overturn an election could be equally ruinous to America’s democratic system and freedoms.

In one sense, the January 6 committee and its success in getting deep inside the ex-President’s West Wing and exposing the plot to steal the election may be easing Garland’s decision making process. While Trump is sure to claim he’s a political victim if charged, the mountain of evidence — including horrifying testimony and graphic video of his mob attacking the Capitol — is serving to prepare the public and shape its perceptions of what really really happened. This may marginally defuse accusations that any prosecution of the ex-President is a purely political exercise.

Even so, every day that signs point closer to a possible indictment of Trump — or a controversial decision not to pursue him — is one step closer to what would inevitably be a period of extraordinary national trauma.