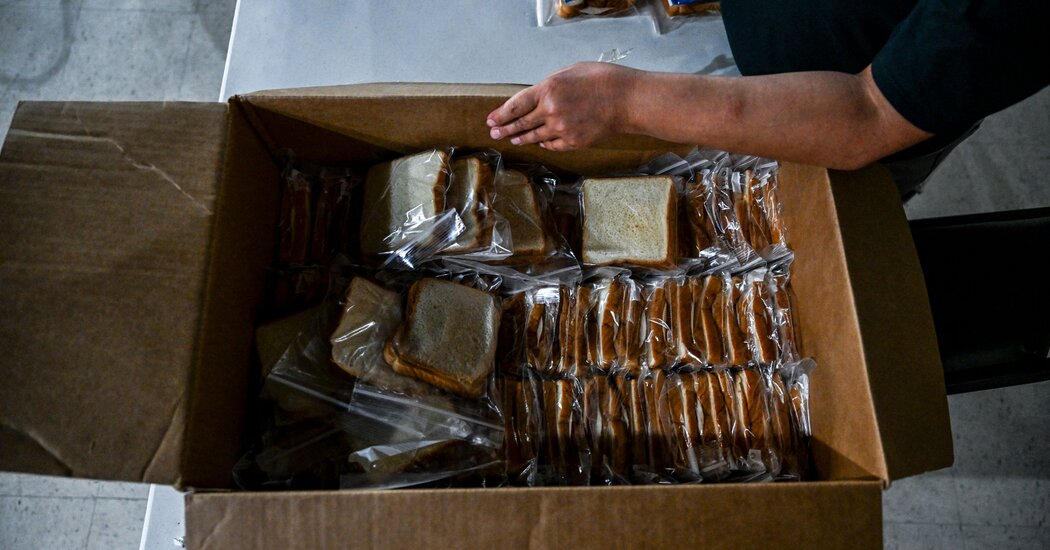 MINNEAPOLIS — The Justice Department said on Tuesday that it had charged 47 people with running a brazen fraud against anti-hunger programs in the coronavirus pandemic, stealing $240 million by billing the government for meals they did not serve to children who did not exist.

The case, in Minnesota, is the largest fraud uncovered in any pandemic-relief program, prosecutors said, standing out even in a period when heavy federal spending and lax oversight allowed a spree of scams with few recent parallels.

The Minnesota operation, prosecutors said, involved faked receipts for 125 million meals. At times, it was especially bold: One accused conspirator told the government he had fed 5,000 children a day in a second-story apartment.

Other defendants in the case seemed to put minimal effort into disguising what they were doing, using the website listofrandomnames.com to create a fake list of children they could charge for feeding. Others used a number-generating program to produce ages for the children they were supposedly feeding, which led the ages to fluctuate wildly each time the group updated its list of those nonexistent children, court papers said.

But their scheme — details of which were reported in The New York Times in March — still pulled in millions of dollars per week, prosecutors said in court papers, because government officials had relaxed oversight of the feeding program during the pandemic and because the other defendants had help from a trusted insider.

That insider was Aimee Bock, the founder of a nonprofit group, Feeding Our Future, that the State of Minnesota relied on as a watchdog to stop fraud at feeding sites. But Ms. Bock did the opposite, the indictments said: When pandemic-relief programs flooded the programs with money, she exploited her position to bring in nearly 200 new feeding operations she knew were submitting fake or inflated invoices.

Even when the government of Gov. Tim Walz, a Democrat, raised questions, Ms. Bock rebuffed them by filing a lawsuit and accusing state officials of discriminating against her group’s largely East African clientele.

The defendants were indicted on charges that included wire fraud, bribery involving federal programs and money laundering. Prosecutors said the conspirators laundered money by routing the funds they stole through a web of shell companies.

Read More on the Coronavirus Pandemic

The case is the largest brought by the Justice Department as it scrambles to address waves of fraud involving pandemic-era programs that sent billions of dollars of aid into the economy, often with few strings attached and little oversight.

The Labor Department’s inspector general’s office has opened 39,000 investigations. At the Small Business Administration, about 50 agents have been sorting through two million potentially fraudulent loan applications. And while the sheer volume of cases all but ensures that some cases will go unaddressed, the prosecutions in Minnesota signal that the Justice Department is moving aggressively on others.

The indictments said the defendants spent their money on real estate in the United States, Kenya and Turkey, as well as on cars and luxury goods. The Justice Department is seeking to seize many of those purchases, including more than 20 cars, more than 40 properties, guns, cryptocurrency and a Louis Vuitton duffel bag.

Prosecutors said on Tuesday that many defendants had been arrested or had turned themselves in. They said some had left the country but declined to say how many.

Ms. Bock pleaded not guilty Tuesday afternoon in federal court in Minneapolis and was released to await trial. Kenneth Udoibok, her lawyer, said afterward that “we still maintain that she was unaware of any fraudulent activities.”

Prosecutors said that those indicted included Sharmarke Issa, the former chairman of the Minneapolis Public Housing Authority, and Abdi Nur Salah, a former aide to Mayor Jacob Frey of Minneapolis, a Democrat. Both men were publicly connected to this case earlier in the year because of their ties to a property that prosecutors said was bought with stolen money.

Also among the people indicted was a Feeding Our Future employee, Abdikerm Abdelahi Eidleh, who was accused of taking kickbacks from people involved in the scheme. Three of the 47 defendants — including another of the nonprofit’s employees, Hadith Yusuf Ahmed — were charged via “criminal information” rather than a grand jury indictment.

The state blocked Feeding Our Future from receiving more aid money after the F.B.I. served search warrants in the case in January. The nonprofit group sought to dissolve at the time, but Attorney General Keith Ellison of Minnesota, a Democrat, blocked the move. Mr. Ellison asked a judge to supervise the group while he investigated whether it broke state charity laws. That investigation appears to be continuing.

As described by prosecutors, the participants targeted two federal food-aid programs, which were administered through state governments. They were intended to feed children in after-school programs and summer camps. But when the pandemic hit, Congress rejiggered the programs to reach millions of children stuck at home, pouring in billions of dollars more and changing the rules to let families pick up meals to go.

As funding went up, however, oversight went down: State officials, for instance, no longer had to check on feeding sites in person.

That left one last line of defense: the so-called watchdog sponsors, like Feeding Our Future. Those nonprofit groups served as conduits for money, from the states to individual feeding sites, and they were supposed to be on guard against fraud.

But the system also gave those watchdogs a reason not to bark: They could keep 10 to 15 percent of the money that flowed through them.

In this case, the indictments said, Ms. Bock’s group kept the money flowing to increase its own cut.

“The defendants exploited the Covid-19 pandemic — and the resulting program changes — to enrich themselves,” the indictments say.

Feeding Our Future had started before the pandemic as a small sponsor overseeing $3.5 million in funding. It never had an accountant on staff and sometimes struggled with basic governance, even allowing its nonprofit status to expire for a time.

But by 2021, Feeding Our Future was handling $197 million in annual funding.

Under its umbrella, the indictments said, six different groups began to operate similar frauds. The conspirators would often register new companies or nonprofits, then quickly sign them up as feeding operations under the supervision of Feeding Our Future.

Then, the indictments said, the new groups would soon report that they were feeding thousands of children per day — numbers that put them among the biggest feeding operations in the state — and began reaping thousands or millions of dollars in federal payments. In Minneapolis, for instance, a man named Guhaad Hashi Said told the state that he was serving 5,000 meals, twice a day, at a new facility called Advance Youth Athletic Development.

The site he listed was an unlikely place for anyone to feed children en masse: The address was a second-story apartment.

Mr. Said was one of those indicted; the indictment said he was paid $2.9 million out of federal money routed through the state and Feeding Our Future. But the indictment said that Mr. Said provided “only a fraction” of the meals he claimed. In an interview this year, Mr. Said said that he had never claimed to serve 5,000 meals a day in the first place.

In other cases, prosecutors said, feeding sites submitted invoices that were suspiciously consistent, with thousands of children listed as attending, day after day with no variation.

“No one got sick. No one missed a meal. No one was away,” said Andrew M. Luger, the U.S. attorney for Minnesota, whose prosecutors are handling the case. “Same children. Every single day. Every single week.”

In 2020, Minnesota officials grew concerned by the speed at which Feeding Our Future was creating new distribution sites and began giving them more scrutiny.

In November of that year, the nonprofit responded defiantly, filing a lawsuit that accused state officials of discrimination. The suit said the state was harming children by delaying the start of Feeding Our Future’s new operations. “Every day that goes by, hundreds of the state’s most vulnerable children are going without much-needed meals,” it said.

Several of the sites where the state had sought to delay operations later became centers of fraud, according to the indictments.

In response to Feeding Our Future’s lawsuit, a state court judge ruled that Minnesota had not taken the steps necessary to block the payments. After that, in April 2021, frustrated state officials turned to the F.B.I. — and continued paying Feeding Our Future and its partners while federal agents investigated.

The state “moved quickly and repeatedly raised the issue to federal authorities until we were able to find someone who would take the troubling spending as seriously as we were,” said Kevin Burns, a spokesman for the Minnesota Department of Education, which handled the food-aid money.

Republicans in the State Senate released a report this month, before the indictments were made public, accusing the state’s Education Department of “dereliction of duty” for failing to stop Feeding Our Future sooner.