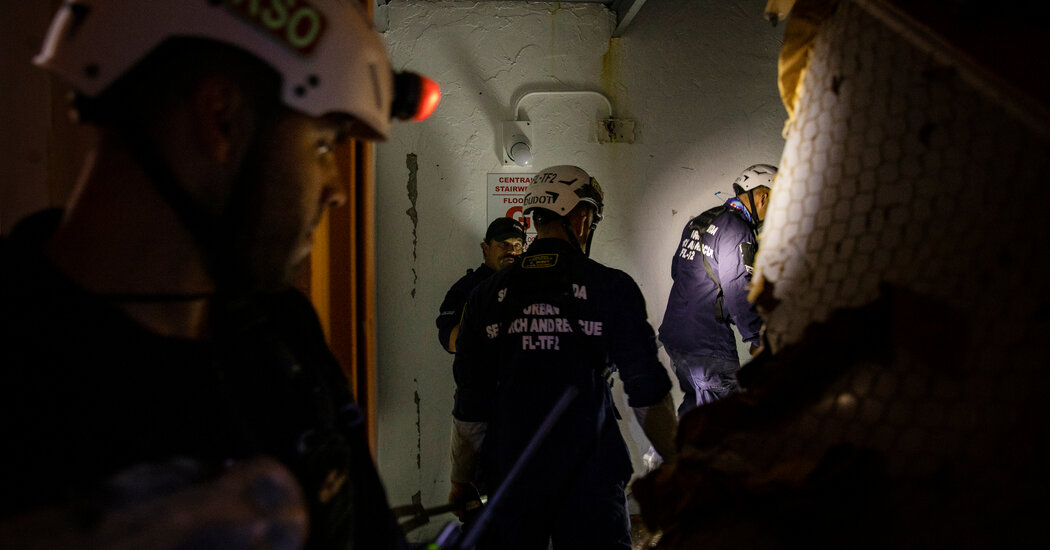 FORT MYERS BEACH, Fla. — On the third day after Hurricane Ian pulverized Fort Myers Beach, the rescuers from Florida Task Force 2 embarked on a laborious new task: to knock on every door that was still standing. It was the only way to make sure they had not missed anyone still waiting to be rescued — or someone who had perished.

“Fire department!” Noel Armas, a rescue squad officer, yelled as he banged on doors at the Mariner’s Boathouse & Beach Resort, on the mangled island’s southern end, which had not been hit as hard as other parts. “Anybody need assistance?”

He put his ear to the window of one unit, fearing that an older person, or someone who was injured or unable to move easily, might be stuck inside and in need of help. Down the hall, Vincent Pangallo, a rescue specialist, clanged on the elevator doors with a huge metal hammer, to make sure no one was stuck.

The rescuers, most of them firefighters who work for the city of Miami, had been the first task force deployed by the state to arrive behind Ian on Wednesday night, rushing in with high-water vehicles to save dozens of people from up to 12 feet of storm surge. One woman told the rescuers that the current had been so strong that she had let go of her husband and he had been washed away.

“After a storm has passed, that 48-hour period offers the greatest opportunity to find survivors,” said Capt. Ignatius Carroll Jr., who was deployed with the task force and is the executive officer to the Miami fire chief.

Now it was Saturday. The water had receded. The team and others that came after it had found at least 750 people who had stayed on Fort Myers Beach during the storm, in defiance of mandatory evacuation orders issued for the area on Tuesday morning. Rescuers had taken about 200 of them off the island.

Right after the storm, the authorities allowed some residents to return with their cars. But the destruction was so widespread that they had later limited people to crossing only on foot. By Sunday, it appeared that even some of those trips were being blocked at a checkpoint.

Among those who stayed after the storm, two had apparently experienced cardiac arrests and needed ambulances, Captain Carroll said, including one whose attack happened in front of a squad of rescuers. The rescuers performed CPR, and the person survived and was sent to a hospital on the mainland.

Many other residents planned to stay, despite the lack of power and water and the presence of dangerous debris everywhere. The rescuers praised how the community had come together to share meals and supplies — “It’s kind of inspiring,” Mr. Armas said — but they nevertheless worried about what the coming days might bring. Already, a fight had broken out on one block, Mr. Pangallo said. As they knocked on doors, they came across one that someone had tried to force open, probably with a screwdriver.

“After three or four days, people are frustrated, aggravated,” he said. “They think the power’s supposed to turn back on.”

He continued: “They become agitated. And they start going to see what they can get from their neighbor, because their neighbor’s gone. And the next thing you know, looting begins.”

He also worried about the mounting death toll, which was at least 42 in Lee County as of Sunday. So far, the rescuers from this task force had not come across any people who had died.

The middle part of Fort Myers Beach, a white-sand town of about 5,600 year-round residents on Estero Island, looked as if it had been bombed. Entire homes had floated off their concrete slabs. Wooden structures were reduced to splinters. On one block, the only bit of a house left standing was its white front door.

The ruins cut a jarring scene against the beautiful, deep orange glow of sunset.

“Look at this paradise,” Mr. Armas said, pointing to the nightfall. Then he pointed to the shattered homes. “And then you have this.”

Even the most experienced rescuers said they had never seen such a destructive storm surge.

He said he considered Ian a lesson on how risky it could be to focus on a hurricane’s wind speeds and not how much water it might thrust onto land.

“This was almost like a biblical event,” he said, “because it was the dirty side of the hurricane, the king tide and the high tide at the same time.”

The squad had been out late on Friday night checking out a report of coughing and moaning coming from the remains of a shattered home. Using cameras, listening devices and dogs trained to sniff out living people, the rescuers had determined after several hours that no one lay in the rubble.

Rescuers physically tag properties and blocks they have checked, but they also use software that allows them to map addresses and color-code them based on their findings. The communications systems on Fort Myers Beach remained spotty over the weekend, forcing the rescuers to return to a makeshift tent city to download the latest data before continuing their searches.

The first couple of days on the island, the task force members — a group of more than 80 people — had eaten a diet of mostly peanuts and Pop-Tarts while working 20-hour shifts, Captain Carroll said. They arrived in a long convoy with swift boats, an 18-wheeler full of supplies and tools to cut a path onto Fort Myers Beach. Last year, the squad was deployed to assist after a condominium collapsed in Surfside, north of Miami, killing 98 people.

Now, in Fort Myers Beach, dazed-looking residents scuttled around on bicycles or hauled carts of supplies — bags from the grocery store, gas canisters — from the mainland. They mostly had to get on and off the island on foot by crossing the Matanzas Pass Bridge. Rally points along the main drag, identified by spray-painted plywood, gave residents a place to await rides to the bridge. One corner featured a tent and a folding table with neatly arranged bottles of booze lined on top.

On one block, rescuers came across three people with shovels and other tools trying to clean their muddied property.

“Are you going to make us leave?” one of the young men asked Mr. Pangallo, who unlike most of the other task force members works for the Fort Lauderdale Fire Rescue Department.

No, Mr. Pangallo said. He just wanted to know that they had enough food and water and knew how to stay safe while running their generator.

The man recounted climbing to the second story of the house with a chain saw during the storm, fearing that they would have to cut through the attic. He and another man rescued two women and two dogs from another house that had been overtaken by the storm surge, he said.

“We’re lucky to be alive,” the other man said.

As the day ended on Saturday, the squad got a call asking them to check out a specific apartment. A 97-year-old woman might be inside.

Clad in white helmets outfitted with headlamps, they quickly drove one building over, grabbed their tools and hustled up the stairs.

They knocked. “Fire rescue!” No answer. Two rescuers prepared to break down the door. They banged their equipment against the doorknob four times.

“One more, one more!” one of them urged. (It actually took seven more strikes.) The door burst open.

“Fire rescue!” Mr. Armas said once inside the apartment. “Anybody here?”

They checked each bedroom, even under the beds. Recently lit candles and a used toilet suggested that someone had been around after Ian. But the woman they were looking for was not there anymore.

“Good,” one of the rescuers said under his breath.

“Clear!” another one yelled down the stairs.