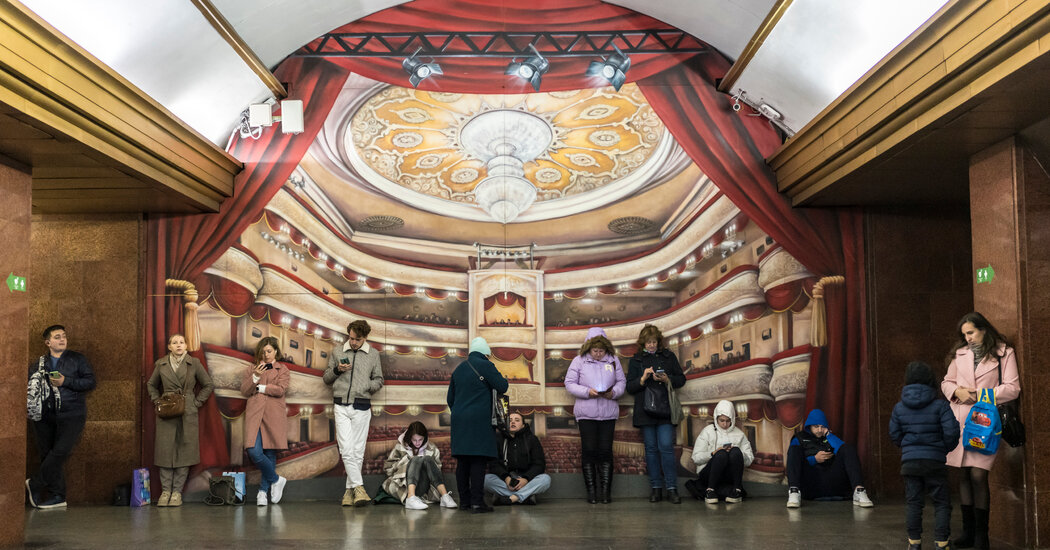 An hour and a half after the first round of explosions, more were heard shortly after 8:15 a.m., and a number of air defense shots fired back were audible. Thick white smoke was blanketing parts of central Kyiv.

The blasts in Kyiv, the Ukrainian capital, were the most significant since a flurry of strikes on Oct. 10. Those attacks were launched after an explosion on a strategic bridge to Crimea, which Russia blamed on Ukraine, and as Ukraine continued to make significant battlefield gains in a counteroffensive in the country’s south.

“The Russians think that this will help them but these actions look more like agony,” Andriy Yermak, a top adviser to Ukraine’s president, said on Monday.

The wave of Russian attacks one week ago, which President Volodymyr Zelensky of Ukraine said had intentionally targeted civilians and power infrastructure, was one of the broadest in months. Missiles hit cities across the country, killing at least 19 people.

The latest attack on Kyiv came as many people were preparing for work and children were just waking up for their school day, with in-person classes having resumed this autumn. Instead of heading to classrooms, children, some already dressed in their school uniforms, made their way to basement shelters. In the Teatralna metro station in the heart of the city, residents scrolled through their phones looking for updates.

In the still of the morning between the blasts, the humming noise of an engine could be heard passing relatively slowly over the city, a telltale sign of a drone. Air raid sirens went off about 10 minutes before the initial attacks.

In streets near the site of one strike, acrid smoke wafted about. The upper stories of an office building were burning, and debris, broken glass and documents littered the pavement nearby. The building appeared to have been empty when it was hit shortly after 6 a.m.

“I woke up from an explosion, went downstairs and saw a building on fire,” said Ihor Stupakov, a programmer who lives about a block from the site of one of the explosions. He said he then heard a buzz overhead and looked up.

“I saw a Shahed” fly by, he said, referring to the drone. “I saw soldiers shooting at it, with rifles and a missile, and I saw it blow up in the sky.”

The building on fire, he added, “is not a military target.”

One drone buzzed low over office buildings and apartment blocks in the city center, visible from the streets below. A cacophony of small-arms fire broke out, as soldiers at checkpoints or other positions in the city opened fire with their rifles.

The attack rattled nerves in Kyiv by showing that last week’s strikes on the capital could be repeated.

Vitali Klitschko, the mayor of Kyiv, in a post on Telegram, confirmed that a number of strikes had hit the Shevchenko district, the same part of central Kyiv targeted one week ago. He said officials were still working to determine whether there had been any casualties, and he urged residents to stay in shelters.

“Fire departments are working. Several residential buildings were damaged. Medics are on the spot,” wrote Mr. Klitschko, who posted photos of what he said were the remains of one of the downed drones.

At least one strike appeared to have directly hit a building just around the corner from the site of one of the missile strikes last Monday, in the heart of the capital near the central train station. The strike targeted energy infrastructure, according to Anton Gerashchenko, an advisor to the interior ministry, and no injuries or deaths were reported.

The attacks on Kyiv one week ago killed five people and left dozens more injured.