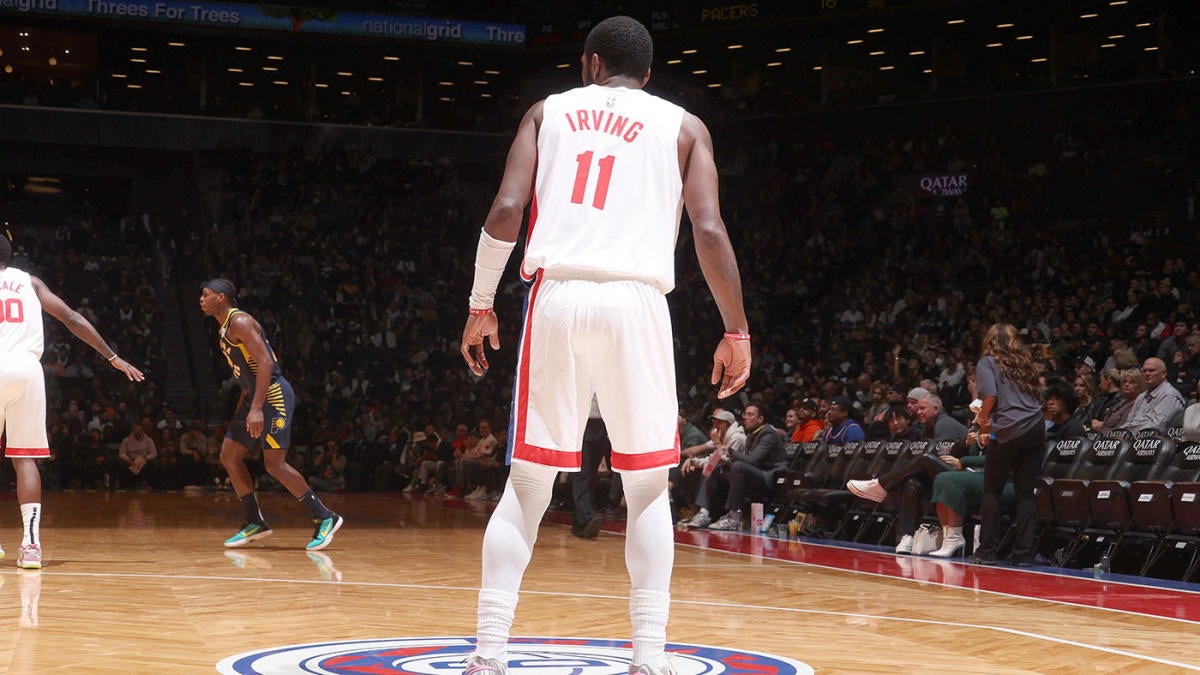 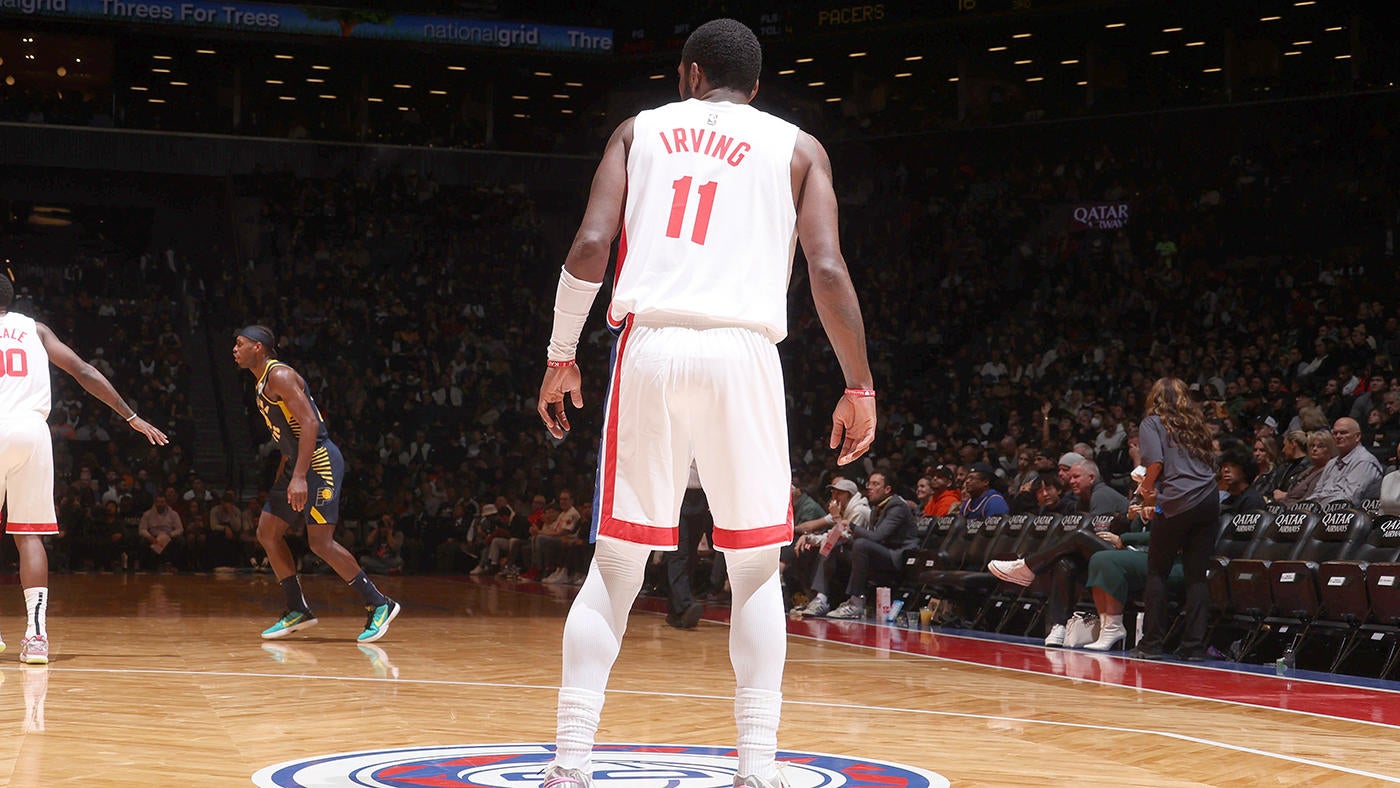 Many things define Kyrie Irving. But few are as impactful, on and off the court, as his utter lack of accountability and self-examination.

That’s been true in the past in a variety of ways, even before the Brooklyn Nets star posted an antisemetic documentary to his 4.6 million Twitter followers Thursday, or after he played the victim at a post-game press conference Saturday night during which he should have simply said, “I was wrong.”

There are many previous examples of Kyrie’s self-regard eclipsing the realities and people around him: Running from LeBron James’ Cleveland Cavaliers team and then, a few years later, taking shots at LeBron’s status as a star. Joining a Boston Celtics squad that had just come off an Eastern Conference finals and saying, and acting as if, that team knew nothing about winning. Proclaiming, before this failed-Nets experiment, that Brooklyn didn’t really have a head coach, Steve Nash notwithstanding. No-showing here and there when it served his purposes despite playing a team sport. Pushing a flat-earth theory and deriding those who’d say that, well, actually, our earth is quite round.

But his innate talent, his scoring prowess, his insane handle — all that basketball excellence reinforced a constant balancing act between Kyrie’s talent and toxicity. He was dazzling, yes, but he was also a chemistry-killing-locker-room vibe machine with an insouciance that he mistook for charm.

This hateful place Kyrie has wandered into, dragging with him his team and league, is next-level awfulness. His latest self-centered actions are also, in basketball terms, potentially destructive. These last several days have been another painful reminder that the endgame of unchecked ego and self-regard often leads to the darkest of places, even for athletes.

If you don’t know much about the documentary Kyrie put out there, “Hebrews to Negroes: Wake Up Black America,” you can read this excellent breakdown at Rolling Stone. The documentary is based on a book, written by the director, that is full of antisemitism, homophobia, xenophobia and Islamaphobia. That book purports many influential Jewish people “worship Satan or Lucifer.”

It’s awful stuff that deserves no equivocation. There’s no excuse for sharing such garbage. Not a player’s talent. Not the good deeds he’s done in the past. Not the I’m-smarter-than-you series of deflections he tried to foist off Saturday night after his team lost to the Pacers, a game which dropped his team to 1-5 and required his teammates to address the antisemitism percolating on their star’s social media.

The question now is what comes next. Teammate and fellow superstar Kevin Durant, asked if this was a distraction Saturday night, said, “Absolutely not. The only impact is you guys and everybody outside the locker room.”

If Durant is saying that he and his teammates don’t care what the hateful ideas Kyrie is spouting and advancing, then shame on Durant and shame on his teammates. Talent and friendship shouldn’t be covers or excuses for antisemitism, racism, misogyny and other forms of hate, a fact Durant and the NBA should know better than most.

This is a league that, rightly and impressively, has tied much of its brand to social justice. That commitment to justice should not be paused because one of the NBA’s stars doesn’t like accountability when it’s applied to him.

This is a league that, rightly and impressively, has in less than a decade forced out two team owners, in part, for making racist statements. Good. But why should it be any different for a star player pushing antisemitic propaganda with his NBA-built brand?

Any virulent racist who posts on Twitter some piece of propaganda pushing one of the countless number of hate-filled pieces floating in the cesspool that is social media aimed to dehumanize and target Black or Jewish people should rightly be fired. And labeled a bigot whose world view, while protected by the First Amendment, has no place of support in this country or any other, nor any business of repute. Including the National Basketball Association.

Let’s be honest here. The racists, antisemites, homophobes and other hate-filled folks out there have been emboldened in recent years. That makes calling out this kind of hate all the more important, and it makes the fact Kyrie has kept that tweet up even more reprehensible and dispiriting.

If arrogance, dismissive and purported ignorance were a legitimate defense against racism and antisemitism, few on earth would face consequences for such behavior.

Kyrie had time to figure out the message he was pushing. To hear from others. To say — if you would be inclined to give him the benefit of the doubt, which tends to be rare in these cases — that he was wrong. But Kyrie didn’t do that. He rarely, if ever, has. And that means this antisemitic sludge on his social media has morphed from his promotion to his endorsement.

Among Kyrie’s comments Saturday night was this doozie, a self-righteous diatribe of cognitive dissonance and dismissiveness all at once:

“You guys come in here and make up this powerful influence that I have over … ‘You, you cannot post that.’ Why not? Why not? Everybody post everything else. You saw the word n— going up on Twitter, right? I don’t hear uproar on that. I’m not here to be divisive on what’s going on on this or that, I’m not comparing Jews to Blacks. I’m not comparing white to black; I’m not doing that. That conversation is dismissive, and it constantly revolves around the rhetoric of who are the chosen people of God. And I’m not here to argue over a person, or culture, or religion on what they believe. Nah, this is what is here. It’s on a public platform. Did I do anything illegal?”

No, just something hateful. Just as those who posted the N-word on Twitter did something awful, disqualifying, ugly, terrible, fireable — but not illegal.

This isn’t small stuff. It’s racists who often downplay the impact of racism and the criticisms of those who call it out. So it’s hard not to watch that press conference and see in Kyrie’s response a similar line that strikes a deep, ugly, depressing chord of antisemitism.

Such support for bigotry doesn’t belong in the NBA. Neither does anyone who doesn’t understand that. The First Amendment protects the government from imprisoning you for what you say. It has nothing to do with your employer or colleagues keeping you around. Just ask Robert Sarver or Donald Sterling.

Remember when LeBron, a few weeks ago, said Kyrie was misunderstood? That, back then, felt like a reminder of the Lakers’ interest in Irving if the Nets could get the right price — or had just had enough. It was a reminder his act might grow tired in Brooklyn, but that he would surely find a home somewhere else.

But the Lakers, along with the rest of the league, should no longer offer an exit ramp. It seems improbable — or one can hope — that LeBron would welcome this hatefulness into his orbit. Because it’s morally reprehensible. Because it’s likely a distraction from hoops, the last thing any team — but especially the Lakers — needs. Because Kyrie’s juice has never been worth its squeeze. Because, for LeBron, welcoming his former teammate into the fold would be too brand damaging even if the hoops outweighed all this ugliness. Which they don’t.

As with Kanye West, you only can separate the art from the artist for so long. There comes a point where past greatness — or even the goodness, in the past, of that person — gets replaced by who someone is now, and by what they do today.

There’s a reason Adidas, CAA and so many others have cut ties with Ye. Just as LeBron, the Lakers and any other NBA team eying Kyrie’s talent should do the same. For me, he’s never been worth it in a basketball sense. But now he’s pushing a piece of propaganda with deep roots in antisemitic tropes, and offering up the same tired lines racists often do: “Did I do anything illegal?” “Everybody posts everything else.” “Did I hurt anybody?”

At best this guy doesn’t get it, at worst he does. Either way, he’s beyond the calculus of weighing the good versus the bad of the basketball side of things. It’s time to move on.

For the Nets, what this means is unclear. The statement last week from Nets owner Joe Tsai that he plans to talk to Kyrie needs to be only the beginning of his organization’s response. But for the rest of the league, see Kyrie for what he is: A star with a gigantic amount of influence who encouraged millions of people to watch a hate-filled documentary aimed at dehumanizing Jewish people. There’s no place for this kind of hate in the NBA. Nor should there be with the Brooklyn Nets.

What that means, for now, is left to the Brooklyn Nets and the NBA. But as communities and business across the country wrestle with addressing antisemitism — from New England Patriots owner Robert Kraft to local school board members — the fact is that the NBA has a problem with Kyrie Irving, and neither silence nor inaction are a solution