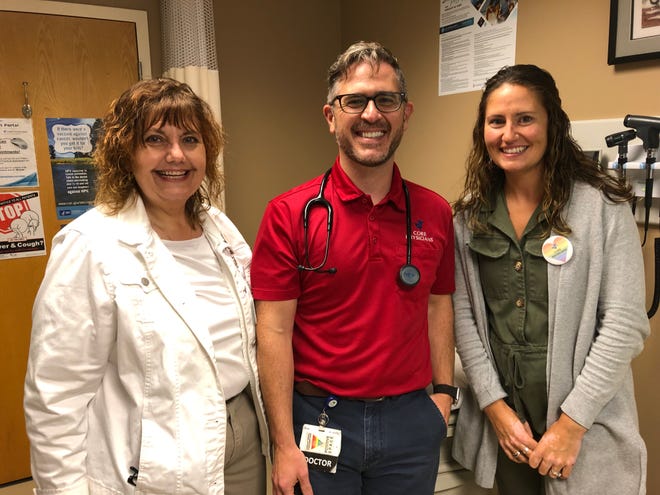 EXETER — Members of the LGBTQ+ community have specific health care concerns and often find it difficult to access a provider to meet their needs on the Seacoast.

Many patients, particularly teenagers and their parents, have needed to travel to large hospitals in urban areas like Boston to get the care they need.

This shortage of care became painfully obvious during the coronavirus pandemic, and a local medical group recently began to take on the challenge of serving this underserved community.

Dr. Robert Kelly, of Core Physicians, and several colleagues are addressing this with a more accessible practice at 21 Hampton Road.

Kelly said he took a look at area primary care practices and saw there was hesitation, or an unwillingness to become involved in treating the needs of LGBTQ patients. So he began to offer services and to bring in medical consultants as needed for his patients’ needs.

“I began to move into gender-affirming care because we need this here,” Kelly said.

He added he felt ready to take on the work that needed to happen, including work revolving around education.

“I started doing consulting work, and the practice just evolved from there,” he said.

How important is it for the medical community to offer care specific to this population?

“New Hampshire hospitals and their providers play a critical role in advancing the health and equity of all patients,” said Steve Ahnen, president of the New Hampshire Hospital Association. “The New Hampshire Hospital Association is very proud of the safe and supportive environments that our providers have created in support of the health and well-being of all people and stands in absolute support of LGBTQ+ community and the clinicians providing their care.”

People in the LGBTQ+ community say it is very important to find a provider who understands their needs.

“I was lucky to find a primary care physician who is excellent with trans patients, but that was by word of mouth, and he does nothing to advertise himself as such,” said Palana Belkin, a Rochester resident who is very active in her community. “I got lucky. It is not uncommon for me to hear about folks traveling two or three hours from New Hampshire to access trans-competent health care in Boston. Clinics like Planned Parenthood, Equality Health Center, and Lovering Health all do a fantastic job providing hormone replacement therapy and sexual health services — but LGBTQ folks also deserve compassionate primary care.”

Gerri Cannon is a state representative from Somersworth and serves on the Somersworth School Board. She recently had gender confirmation surgery.

“The best thing is having a medical practice that understands the needs of transgender people,” she said. “I have many specialists near me in Dover and they can care for me. But, I’ve had to make sure they know my medical history and my future plans, like surgery.”

More:History-making NH Rep. Gerri Cannon on why sex confirmation surgery was right for her

“I had to travel to Boston,” said Cannon. “I’ve had friends travel to Dartmouth Hitchcock. Working with transgender-knowledgeable surgeons and staff is incredibly uplifting. I constantly hear about transgender female to male people looking for top surgery or bottom surgery knowledgeable surgeons. Male to female people are looking for vaginoplasty surgical teams. We don’t have any in our corner of New Hampshire yet.”

What is gender-affirming care?

As defined by the World Health Organization, “Gender-affirmative health care can include any single or combination of a number of social, psychological, behavioral or medical (including hormonal treatment or surgery) interventions designed to support and affirm an individual’s gender identity.”

Dr. Kelly treats adults, not children, in his gender affirming practice. As a family physician, Kelly said he treats people from birth to death, and that includes all populations.

Kelly said, in the past, the focus on gender care was mainly in prevention.

“HIV? Take a pill to help prevent it,” he said. “Anything more and patients are being referred to infectious disease doctors or other specialists, which carries a much higher price tag, higher co-pays. That’s simply because there is not a lot of care available.”

Kelly said a percentage of gay men simply want peace of mind and to know they can have safe sex.

One treatment for gay men is PrEP (Pre-Exposure Prophylaxis). It is the use of antiretroviral medication to prevent HIV infection. PrEP is used by people without HIV who may be exposed to HIV through sex or injection drug use.

According to the CDC (Centers for Disease Control and Prevention), The U.S. Food and Drug Administration has approved three medications for use as PrEP. Two consist of a combination of drugs in a single oral tablet taken daily. The third medication is a medicine given by injection every two months.

Kelly also sees patients with gender dysphoria, a condition where a person is conflicted about their gender identity and the gender their body inhabits. He said counseling is used to help the patient come to a better understanding of the condition.

“I have consulting colleagues who treat top and bottom,” he said. “We do hormone therapy and integrated behavioral health therapy. We do gender diverse care and referrals for surgery. We work closely with local providers.”

Top and bottom can be defined as top dealing with breast removal or augmentation as needed. Bottom involves the genitalia that a patient feels is inappropriate for the person they identify as.

One colleague, Dr. Kimberly Marble, a plastic surgeon who does a lot of work with breast cancer patients, does “top” surgery for Kelly’s patients.

“She does removal of breast tissue, or adding it, as the case calls for,” said Kelly.

“I do all forms of top surgery, including FTM (female to male), MTF (male to female) and non-binary,” said Dr. Marble. “I also offer laser hair removal, as well as free makeup consultations and skin care consultations for general skin health, anti-aging, and treatment of acne that can occur when taking testosterone.”

“She’s skilled in transgender medicine,” said Kelly. “She does gender-affirming hysterectomies if desired. Many of the patients I see do not ultimately elect to do surgery.”

“I work with transgender woman-to-man patients,” she said. “I provide gender-affirming surgery. As part of my day-to-day practice, I do hysterectomies, for different reasons, painful periods, bleeding and cancer. A man trapped in a woman’s body can desire removal of the uterus and ovaries. Some patients who consider themselves gender neutral don’t mind keeping their ovaries, but we will remove the fallopian tubes so they do not get pregnant. We can suppress menstruation.”

Caron said she will require a person wanting the surgery to have been living as a man for about 12 months to be sure it is the right decision for them. During that time, they will work with a therapist.

“I am the last step,” said Caron. “They will have worked with Dr. Marble for top surgery first. We work through the hormones. These are people who are uncomfortable with the body they are in.”

Caron said she sees this type of patient a lot more than she used to. She does not yet give testosterone to women, but she said it is done through the practice by another provider.

“This is more accepted now,” she said. “The more acceptance there is, the more services will follow.”

Tracie Baird is the clinical supervisor for the four Core practices located at Hampton Road. She said she loves the work done at Kelly’s office and is proud to be a part of it.

“I do a lot of training with staff,” Baird said. “I also help with gender-affirming therapy like hormone injections. Some of those we can teach and the patient does at home. Others must be done in the office.”

Baird said she works a lot with parents of younger adults. And she helps with insurance billing and serves as a liaison with practices who refer patients to Kelly.

“I talk with parents, for whom this might be difficult,” said Baird. “We talk about the pronouns their person might prefer, about the name they want to be referred to as. We help foster a better understanding between family members. Sometimes parents ask, ‘What did I do wrong?’ They did nothing wrong. I tell them this is who your child is.”

Kelly works with all patient concerns.

“Right now, I am fielding a lot of questions about monkeypox,” said Kelly. “Currently cases in gay men are in a higher percentage group, even though it is not a gay disease. I have had a few dozen patients asking me about the vaccine. There is a vaccine available but New Hampshire is in a state of flux as to how to administer it because there is not enough, and no mechanism to distribute it. The FDA is looking to authorize emergency use authority, as they did with COVID vaccines, using a smaller dose to make it go further.”

“Primarily now I see patients one day a week and they are ages 11-80,” he said. “This is just part of my practice, but I am happy to be able to provide the care.”

In 2019, The NH Foundation for Healthy Communities bestowed its Noah Lord Patient & Family Engagement Award on Exeter Health Resources to honor the work done by their LGBTQ+ Advisory Council to improve the design and delivery of care for patients in the LGBTQ+ community.

Over the past several months, the Advisory Council has been instrumental in promoting a welcoming, gender-inclusive culture throughout the health system. They have worked to update the organizations’ websites to include information about these service offerings and to reflect gender-inclusive language and photos.

Other significant achievements include removing the words “male” and “female” from Hospital patient wristbands, changing all single stall bathrooms at Exeter Hospital to be gender neutral, and providing ongoing education to staff.

Kelly recently did a podcast with Sg2 Perspectives about his practice. To learn more visit https://sg2.podbean.com/e/exeter-health-resources-lgbtq-health-program-an-interview-with-dr-robert-kelly/

In addition to treating LGBTQ patients, Kelly offers addiction services including medically assisted treatment, another area he feels there are not enough practitioners of in New Hampshire.