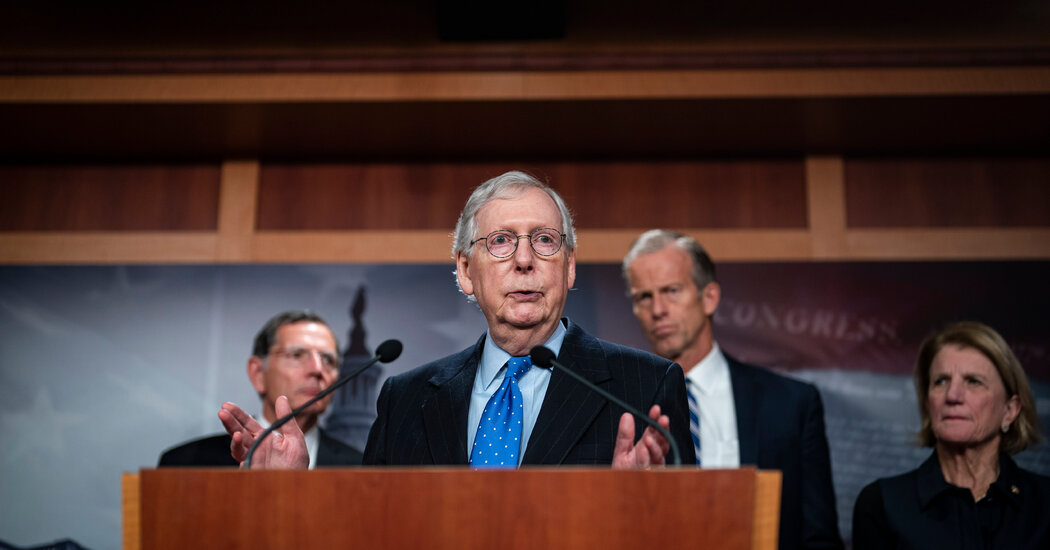 Yet when Donald J. Trump stepped onto the flag-bedecked stage at his gilded Palm Beach palace on Tuesday evening to declare that he would run for president again, it was as if none of it had happened.

The former president cannot stop trying to make his own reality and cannot start accepting responsibility for his actions or acknowledging their consequences. In the heads-I-win-tails-you-lose world of Mr. Trump, all successes accrue to him, and any failings are someone else’s fault — the 2018 midterms, when Democrats took back the House; his own presidential loss in 2020; and now 2022, the worst showing of a party out of power in two decades.

In that sense, with the smoke still rising on a national rebuke, the choreographed conviviality on Tuesday night was the ultimate in not taking responsibility.

Instead, Mr. Trump spun out an alternate vision where the news media has not reported all his successes and where much of the blame for the party’s shortcomings in the midterms “is correct,” though none of that blame belongs to him. And while the country, he told supporters, has slid from greatness to abject embarrassment in two short years, its citizens “have not yet realized the full extent and gravity of the pain our nation is going through” — a suggestion that voters would have punished the party in power if they had only shared his understanding of President Biden’s depravity.

He showed, in other words, that the word “loser” remains his ultimate epithet.

“If he thinks he can win in 2024, he is going to run in 2024, and I doubt there is anyone who can change his mind on that,” said Mick Mulvaney, an acting chief of staff in Mr. Trump’s White House. “The question is whether, in light of 2018, 2020 and last week, is he — himself, and no one else — starting to recognize that if the presidential election were held today, he would probably lose.”

Mr. Mulvaney added, “A lot of folks think that, myself included, but we don’t matter.”

Mr. Trump’s handpicked candidates for the Senate in Pennsylvania, Arizona and Nevada lost. His most ardent and loyal followers fell short — some far short — in their quests for the governorships of Pennsylvania, Michigan, Wisconsin and Arizona. Two of his revenge picks to knock off House Republicans who voted to impeach him lost critical general election races in Michigan and Washington.

And his unwavering insistence that Republicans run in 2022 on the false claim that victory was stolen from him in 2020 helped turn a referendum on President Biden’s political stewardship into a choice between continuance of control for a stumbling Democratic Party or a transfer of power to a Republican Party that many voters found beyond the pale.

To Mr. Trump, none of that had any bearing on his desire to return to power.

“He’s in his late 70s and has never taken responsibility his entire life,” said Peter J. Wehner, a senior aide in George W. Bush’s White House and a prominent conservative critic of Mr. Trump. “The idea that he will take responsibility now stretches credibility.”

“I don’t take responsibility at all,” Mr. Trump said in March 2020 of the government’s faltering response to the rampaging coronavirus, as he pinned the blame on Barack Obama, who had left office nearly four years before.

“People thought that what I said was totally appropriate,” Mr. Trump said in Texas, six days after his supporters violently ransacked the Capitol on Jan. 6, 2021, as he dismissed any notion that his exhortations to march on Capitol Hill had any consequences.

Caught on tape bragging about sexually assaulting women — “when you’re a star, they let you” — Mr. Trump brought women who once accused Bill Clinton of misconduct to a debate in 2016 with Hillary Clinton, a classic in the blame-shifting genre.

After a botched special operations raid in Yemen left a Navy SEAL, Chief Petty Officer William Ryan Owens, and several civilians dead, Mr. Trump said of his generals in 2017, “This was something they wanted to do,” adding, “and they lost Ryan.”

Asked that year why Republicans had failed to enact health care legislation, he declared, “We’re not getting the job done, and I’m not going to blame myself, I’ll be honest.”

Allegations of tax fraud and accounting malfeasance at his company, the Trump Organization? That was all the doing of Allen H. Weisselberg, its former chief financial officer. Strong-arming Ukraine’s president, Volodymyr Zelensky, into announcing an investigation of his political rival? “A perfect call.” Absconding with classified documents from the White House? Those were his.

“Do you understand why they took those items from you?” a kindergarten teacher pretended to ask the former president in a spoof TikTok video. “No, not for no reason, friend. Those did not belong to you. You took them home, and you were not supposed to, so they took them back, the F.B.I.”

Mr. Trump’s unwillingness to take responsibility for six years has been met with willing partners in the Republican Party. Responding to unending charges of Mr. Trump’s wrongdoing, his allies initiated deflecting investigations of their own, into China’s culpability for the pandemic, Speaker Nancy Pelosi’s failings on Jan. 6 and the “collusions” of Mr. Biden’s son Hunter with Russia.

With the failure of the Republicans’ promised “red wave,” there may yet be consequences for the former president, whether he accepts them or not. As Republican senators stare at another two years in the minority, or as a Republican House frets over governing next year with a razor-thin majority, Mr. Trump’s erstwhile allies may re-evaluate their support. And some of them may see Florida’s newly re-elected Republican governor, Ron DeSantis, as an alternative.

“I don’t think that’s the right question,” Senator Cynthia Lummis, Republican of Wyoming, snapped on Monday when a reporter asked if she would endorse Mr. Trump’s new run. “I think the question is who is the current leader of the Republican Party. Oh, I know who it is: Ron DeSantis.”

In that, South Carolina’s Mark Sanford, a Republican former governor who was driven out of Congress for criticizing Mr. Trump, sees a possible break with past patterns. He pointed to Club for Growth, a mainstream conservative political action committee, daring to email out four new polls on Monday that show Mr. DeSantis leading Mr. Trump among potential primary voters in the G.O.P.

“You’ve watched people contort themselves to fit into Trump’s orbit, to not be in his cross hairs,” Mr. Sanford said. “But the carnage has become so widespread, it’s metastasized to such an extent that people who thought it was someone else’s problem now understand it’s theirs.”

Mr. Wehner, the senior aide in the Bush White House, pointed not only to Republican lawmakers who have said that it is time the party move on from Mr. Trump, but also to conservative media outlets that have been remarkably critical, including The New York Post, The Wall Street Journal and Fox News.

“It’s completely cynical,” Mr. Wehner said. “They’re now breaking with him not because he’s done anything unethical or immoral — he’s been doing that for decades. It’s simply because they are now making the judgment that he is no longer the path to power.”

“After violating so many democratic norms and values, and misunderstanding our democratic institutions, perhaps President Trump can look in the mirror, finally respect the will of the people and stand down from his ambitions,” Mr. Bridgeland said on Tuesday, ahead of Mr. Trump’s announcement.

In light of what unfolded at Mar-a-Lago, that felt more like the wishful thinking of a born optimist than the judgment of a seasoned student of Mr. Trump.

“Many, many people have told him before that his political career was over,” Mr. Mulvaney said. “And all of them have been wrong up to now.”