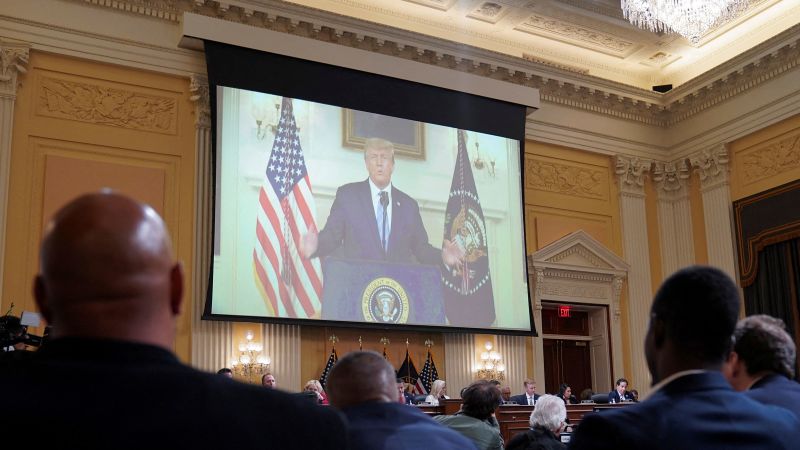 Previously unseen footage of former President Donald Trump is seen during a committee hearing in July.

The House select committee investigating the Capitol Hill insurrection concluded its series of eight hearings over the summer with a presentation intended to be the final piece of its narrative puzzle that painted former President Donald Trump as responsible for the violent attack on the US Capitol – and more broadly, American democracy – on Jan. 6, 2021.

Over the course of the two months’ worth of hearings, the committee tapped into the hundreds of taped depositions, as well as key witnesses who testified live, to present a devastating case that Trump sought multiple avenues to try to overturn the 2020 presidential election even after he was told he lost, that the former President knew ahead of time January 6 could turn violent, and that he chose not to act when his supporters attacked the Capitol and put the lives of lawmakers – not to mention his own vice president – in danger.

The panel’s set of eight hearings were remarkable for multiple reasons filling out the details about how the US Capitol came under attack on Jan. 6.

Here’s a recap of some of the key things revealed so far:

All the President’s men (and women): For two years, congressional Democrats ran into White House stonewalling while they tried to investigate all aspects of the Trump administration. Beyond some notable exceptions – notably the officials who came forward during Trump’s first impeachment – the blockade was successful at evading accountability.

Things have been different with the Jan. 6 committee.

Former White House officials by and large came forward and spoke to the committee, which conducted more than 1,000 interviews in all. Some required a subpoena, but everyone from Trump’s former personal assistant Nick Luna to spokesman Jason Miller to former White House counsel Pat Cipollone testified before the panel in videotaped depositions.

The White House power vacuum: There was a consistent theme throughout the January 6 hearings: Trump was told over and over again that the election hadn’t been stolen and he couldn’t overturn it, but he ignored that advice and found confidantes who told him what he wanted to hear.

Instead of listening to Barr or Cipollone, he turned to Rudy Giuliani and Sidney Powell, lawyers who told him the election had been stolen. When Barr’s replacement, Jeffrey Rosen, also refused to embrace Trump’s baseless fraud claims, the President considered replacing him with someone who did, Jeffrey Clark.

Instead of taking the advice of Senate GOP Leader Mitch McConnell – who waited until the Electoral College affirmed Joe Biden’s victory on December 14 to declare Biden president-elect – Trump cut off communication with McConnell and embraced House Republicans plotting to reject electors through Congress on January 6.

No one, it appeared, was able to stand up to Trump and tell him he had to stand down.

The toll of January 6 on civil servants: At several points across the hearings, the January 6 committee made a point to illustrate how Trump’s attacks on the election and the violence that occurred at the Capitol had impacts that went far beyond the political realm.

At the committee’s opening hearing, Capitol police officer Caroline Edwards testified about the injuries she suffered at the hands of rioters. The committee brought in state officials like Arizona House Speaker Rusty Bowers and Georgia Secretary of State Brad Raffensperger, both Republicans, who received numerous threats after Trump had lashed out at them.

One of the most heart-wrenching moments came from the testimony of Wandrea “Shaye” Moss and her mother Ruby Freeman, who were volunteer election workers in Atlanta during the 2020 election.

Read more about the past hearings here.