Many of Hurricane Ian’s Victims Were Older Adults Who Drowned 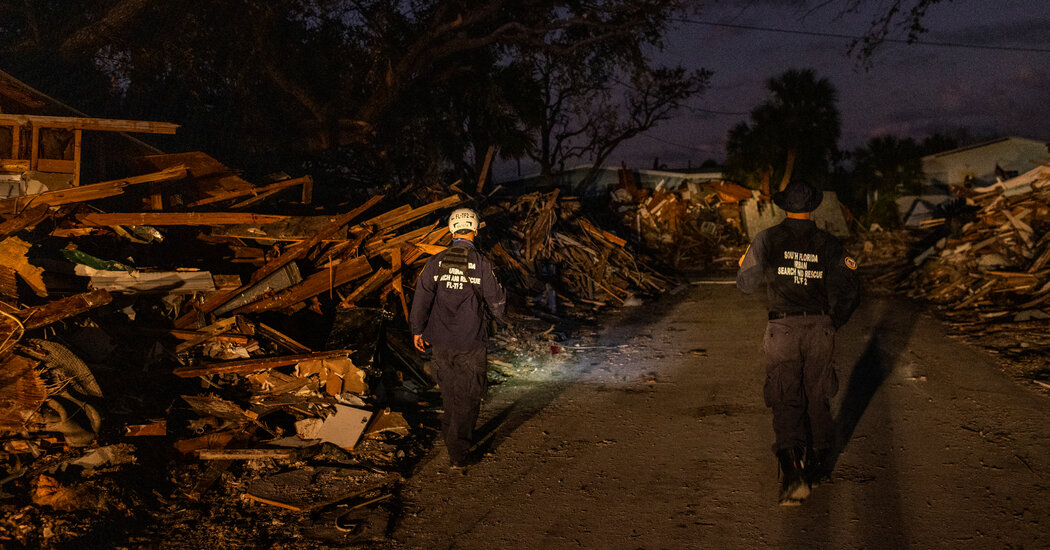 A 57-year-old woman in the Sarasota area developed hypothermia and died after her roof caved in and she became stuck in floodwaters. A 96-year-old man drowned after getting trapped under a parked car in Charlotte County. In Fort Myers Beach, the body of an 85-year-old woman was found in a tree several days after the storm.

After Hurricane Ian punched Florida last week, shredding beachfront towns and flooding large swaths of the state, the storm was blamed by state and county officials for at least 117 deaths, more than any other hurricane had caused in Florida since 1935. Officials in North Carolina linked four deaths there to the storm as well.

Though the circumstances of many of those deaths remained unclear, information released this week by state and local governments provided a distressing portrait of a hurricane that at times overwhelmed both residents and emergency responders.

At least 54 of the victims died by drowning, records showed. Nearly two-thirds of the dead were in two counties on Florida’s southwest coast, Charlotte and Lee, that faced monstrous storm surge and winds exceeding 150 miles an hour. And many of those who died were older. Of the 85 people for whom an age or approximate age has been released so far, 60 were at least 60 years old. Eighteen of them were in their 80s, and five were in their 90s.

A review of medical examiners’ accounts, law enforcement reports and 911 audio obtained through open-record requests, as well as interviews with relatives of those who died, revealed a chaotic, harrowing response to a storm whose path forecasters had struggled to pinpoint.

Calls poured into emergency dispatch centers by the thousands as the storm bore down. Residents who stayed put despite evacuation orders scrambled for safety as their homes filled with water or blew away. Some died when the power went out and they were no longer able to use oxygen machines.

The suicides of two men in their 70s who killed themselves after seeing the damage in Lee County are also included in the official count of storm-related deaths.

In Fort Myers Beach, Daymon Utterback, 54, decided to ride out Ian at home, as he had done in previous hurricanes, according to his uncle, Terry Goodman. Mr. Utterback, a machinist with a manufacturing company who was known for a sharp sense of humor, did not expect the storm to be very severe, his uncle said.

As storm surge flooded their house, Mr. Utterback’s fiancée stood on top of a grill to keep her head above water, according to a next-door neighbor, Steve Johnson. She survived the hurricane, but Mr. Utterback became trapped while trying to open a window, and drowned.

Mr. Johnson said he escaped the storm by trekking through chest-high water, against powerful winds. When he returned to his house the next day, after the floodwaters receded, he saw Mr. Utterback’s body. He put a towel over the body, he said.

“It was just so sad to see him there,” Mr. Johnson said.

Mr. Utterback was one of at least 53 people who died because of the storm in Lee County. In neighboring Charlotte County, the sheriff’s office said 24 deaths there had been linked to the storm, though only two of those had been reported to state officials as of Friday.

“Everyone, I know, tries to do the best they can,” said Mr. Goodman, adding that he did not blame anyone for what happened to his nephew. “It’s just — decisions that individuals make sometimes don’t work out the way they want them to,” he said.

Though Ian’s devastation was most severe in southwest Florida, the storm also caused flooding and dangerous travel conditions in other parts of the state and the region. Officials in 15 Florida counties each reported at least one storm-related death, including a 22-year-old man who died when his vehicle hit a fallen tree in Polk County, near the middle of the state, and an 85-year-old man who fell off a ladder while putting up a tarp in Putnam County, in northeast Florida.

In New Smyrna Beach, on the Atlantic coast, Alice F. Argo kept calling and calling for help when the storm hit. At first, her husband, Jerry W. Argo, was refusing to go to a shelter, and the couple wanted help to get to safer ground across the street. As night fell, Ms. Argo’s calls for assistance grew more frequent and more urgent. Her husband, 67 years old and 250 pounds, had fallen and hit his head, and she could not lift him.

A Volusia County dispatcher told Ms. Argo that at least 400 people had called for help and that rescuers would get to the Argos when they could. “You’ve got to do your best to wait it out,” the dispatcher said, according to a 911 recording.

The county was waiting for special vehicles that could drive through floodwaters, the dispatchers said. Police records show that Ms. Argo called for help a total of 10 times over the course of nearly 12 hours. The last time was at 10:38 p.m. By then, Mr. Argo was already dead.

“I feel if they had gotten there sooner, he might have survived,” said Lisa Mitchell, Ms. Argo’s daughter. “My mom said when they got there, they picked him out of water, put him on her coffee table, gave him CPR, shocked him and everything, and couldn’t revive him. Of course not — because he was there an hour and a half already.”

Andrew Gant, a spokesman for the Volusia County Sheriff’s Office, said that the sheriff, Mike Chitwood, had ordered a review of how the case was handled. The county has six vehicles that can navigate floodwaters, and the National Guard later brought five more to the county.

“The review of the incident (and the entire storm) is just in its initial phases, but I believe one likely outcome is acquisition of more of the high-water trucks,” Mr. Gant said in an email.

Deciding whether to evacuate when a storm approaches can be especially difficult for older adults, some of whom require extensive medical equipment, or cannot drive, or cannot easily sleep at a makeshift shelter. There are also emotional calculations.

“This is not necessarily about the ability to evacuate, it’s leaving a home that is everything to you, that you might not see again,” said Sue Anne Bell, a University of Michigan professor who studies disaster preparedness in older populations.

In the days before Ian made landfall, the storm was initially expected to hit the coast north of the Fort Myers area, but the forecast track shifted south and eastward as the storm approached the state. Several counties in southwestern Florida issued early evacuation orders, but Lee County waited longer than some of its neighbors to tell residents in coastal and vulnerable areas to leave. State and local officials have repeatedly defended that decision as reasonable, given the information the county had at the time.

Though some residents would probably have chosen to ride out the storm regardless of when an evacuation order was issued, others said they might have made a different decision with earlier notice. With a storm the size and power of Ian, though, even some of those who did evacuate did not stay safe.

An 82-year-old man in Lee County died after leaving behind prescription medications when he fled the storm. Another man, who was 58 and had health problems, left his home in Lee County for a condo in another part of the state. But that condo’s elevator was out of service because of flooding, and when the man climbed seven flights of stairs to reach the unit, officials said, he collapsed and died.