March for Babies raises money, awareness for health equity of moms and newborns 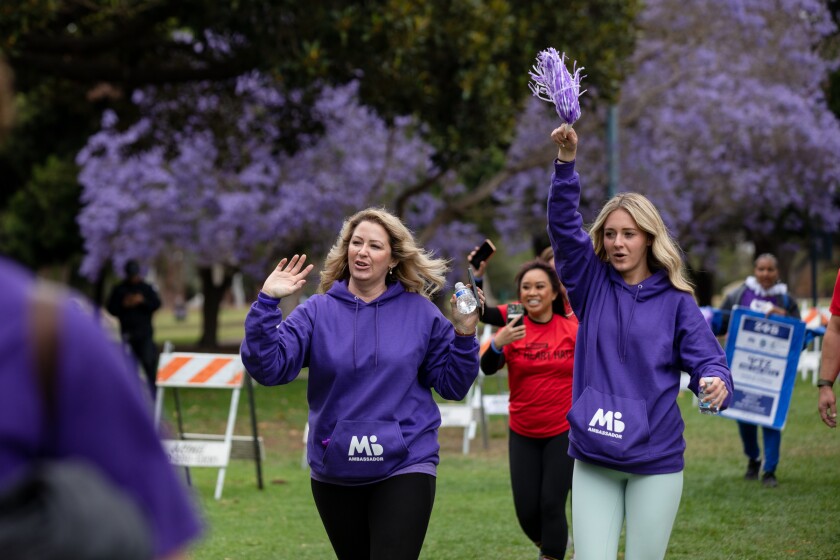 When Emily Schmierer was born more than two months premature, her mother Liz worried whether her girl would grow up healthy.

Liz was diagnosed with a condition in which amniotic fluid volume is produced at less than expected levels and, after she gave birth, Emily spent five weeks in a newborn intensive care unit.

Today 18-year-old Emily is a senior at Fallbrook High School, captain of the field hockey team and heading to Arizona State University in the fall. On Saturday morning, in what has become an annual ritual for mother and daughter, the Schmierers walked across the Cabrillo Bridge to the fountain at Balboa Park and back in the March for Babies, organized by the March of Dimes.

“This is important to me, because I became so lucky that I was born prematurely with no health issues at all,” Emily said, “and I want to make sure that I’m not the only one that gets that luck. I want every child to have that opportunity to live like I’m living.”

About 600 people, many with similar stories, gathered to support mothers and babies through programs, research, education and advocacy. In its 52nd year, the March for Babies: A Mother of a Movement — formerly called WalkAmerica — is the March of Dimes’ largest fundraiser and the nation’s oldest charitable walk. Similar events are being held across the country this spring.

“This is a time to pay tribute to those we’ve lost, honor babies born pre-term or with birth defects, and connect with others committed to advancing our mission,” said Stacey D. Stewart, CEO of March of Dimes, which has its national headquarters in the Washington, D.C., area.

According to the organization, about 10 percent of births in the U.S. are pre-term, resulting in a C-minus grade in its annual report card. Though the incidence of infant death has slowly declined in recent years, Black and Native American babies are twice as likely as White babies to die before their first birthdays.

In 2014, Jessica Wade, a Black woman living in Los Angeles County, was pregnant with twins. Feeling something was not right, she and her husband went to urgent care multiple times, only to be sent back home, she said. At 21 weeks, her water broke and she lost one of her boys through miscarriage. The other was born at 27 weeks and six days, spent 143 days in newborn intensive care and his heart stopped three times.

“Sometimes we are not listened to,” Wade said. “I went to urgent care seven times. If someone had taken a second look and said, ‘Maybe she needs to go see a specialist, maybe she needs a (cervical) cerclage or some kind of intervention,’ I could have possibly saved my twin.”

Inspired by March of Dimes team members and the curriculum and guidance they supplied after giving birth, Wade became a trained professional assisting pregnancies and helping mothers of newborns. Now she is the maternal and infant health manager for the March of Dimes in San Diego and Imperial counties.

“This gives parents hope that there are people who have survived and lived perfectly fine lives after the struggles of having the baby,” she said.

Because of the pandemic, Saturday marked the first time since 2019 that the San Diego chapter held an in-person walk.

“Last year when we did the virtual event, we raised $235,000, which was the most money raised in the past five years,” said chairman Steve Van Dyke, who is a vice president at McCarthy Building Companies. “We got a lot of momentum because I think a lot of people were willing to give and be philanthropic during the pandemic.”