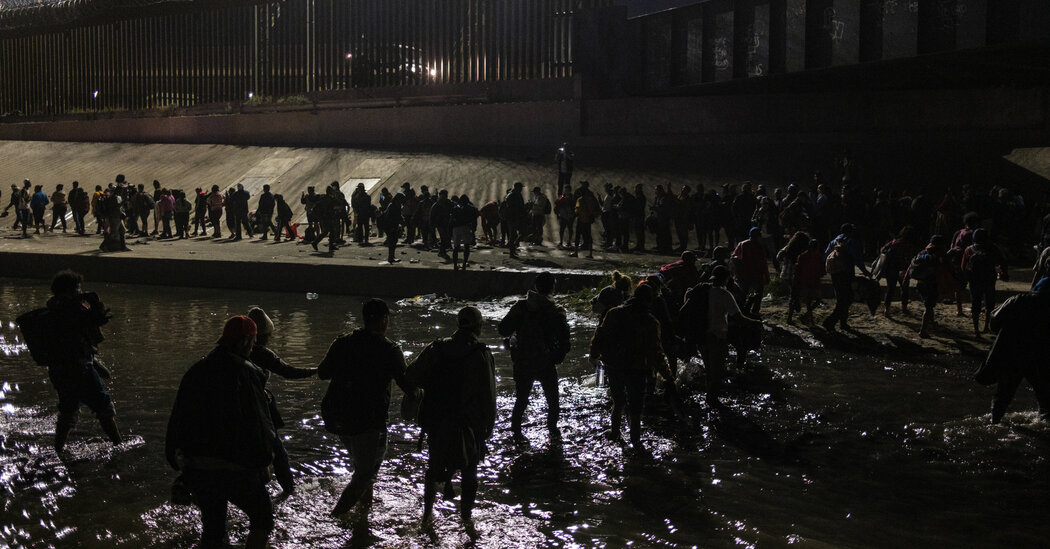 The images of large numbers of migrants, wading across low sections of the Rio Grande in El Paso, immediately recalled previous moments of crisis at the southern border, most recently in the small city of Del Rio, Texas, where more than 9,000 migrants, mostly from Haiti, crowded in squalid conditions in a temporary camp under a bridge along the river last year.

The scenes provided a potential window into the situation that border authorities have been bracing for as early as next week, when a pandemic health policy known as Title 42 is set to expire. The policy, put in place by the Trump administration and continued under President Biden under a court order, has allowed U.S. authorities to rapidly expel migrants, even those seeking asylum, in order to help prevent the spread of the coronavirus.

However, the United States is limited in its ability to expel Nicaraguans under the public health authority for diplomatic reasons. Mexico will not accept them, and the Biden administration cannot send repatriation flights. As a result, most of the Nicaraguans apprehended are released on a short-term parole with a tracking device or sent briefly to Immigration and Customs Enforcement detention, where they are typically released after a few days.

Eventually, they will face removal proceedings in immigration court. Border officials could also issue a warrant and a date to appear in immigration court, but that is a process that can take about two hours for each person and lead to significant backups, contributing to overcrowding.

The group arriving on Sunday included migrants who had been traveling from several Central and South American countries, as well as Haiti, and who had been granted temporary legal status in Mexico that allowed them to travel freely in that country for 180 days, said Santiago González Reyes, the head of the human rights offices in Ciudad Juárez, across the border from El Paso.

The government in the Mexican state of Chihuahua had bused a caravan of about 1,100 migrants into Juarez on Sunday afternoon, Mr. González said. The buses, about 19 of them, were paid for by the Mexican government, he said, which had reasoned that the migrants would have walked north anyway and provided a police escort to keep them safe.

The group did not stay long in Juárez. Around 4 p.m., the migrants decided to cross the border en masse, he said, and hundreds more joined them. “They left on foot and crossed the river,” Mr. González said.