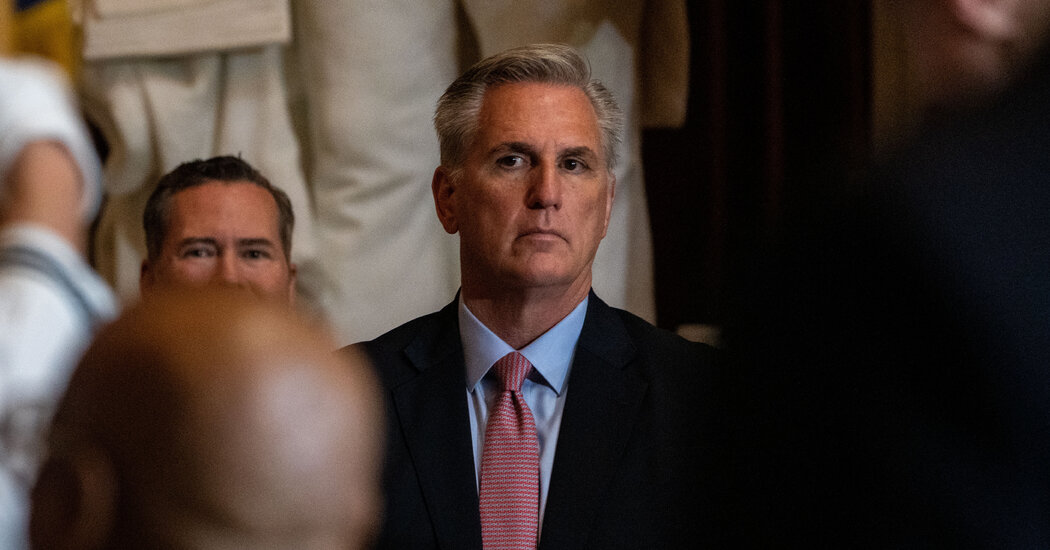 WASHINGTON — Representative Kevin McCarthy of California, the top House Republican, said that if his party wins a majority in next month’s midterm elections, its members would be unwilling to “write a blank check” to Ukraine, suggesting it could be more difficult for President Biden to get congressional approval for large infusions of aid to bolster the country’s war against Russia.

“I think people are going to be sitting in a recession, and they’re not going to write a blank check to Ukraine,” he said in a recent interview with Punchbowl News. “Ukraine is important, but at the same time, it can’t be the only thing they do, and it can’t be a blank check.”

Mr. McCarthy’s comments reflected the rising tide of isolationism in the Republican Party, especially in the House, where an increasing number of libertarian-minded conservatives who have adopted former President Donald J. Trump’s “America First” position have vocally opposed authorizing billions of dollars in military and humanitarian aid to Ukraine as it fights off an unprovoked attack from Russia.

That impulse led 57 House Republicans to vote in May against a $40 billion aid package for Ukraine. In the Senate, 11 Republican senators opposed the aid package after Senator Mitch McConnell of Kentucky, the minority leader, forcefully marshaled support for the legislation in his conference.

In total, Congress has approved more than $60 billion to Ukraine this year alone by overwhelming margins, the largest amount of military aid the United States has committed to any country in a single year in nearly half a century, since the Vietnam War.

Mr. McCarthy, who is in line to be speaker if his party wins control of the House, voted for the aid package in May, as did his top two deputies. His remarks on Tuesday casting doubt on his party’s appetite to send more aid underscored the precarious balance he is attempting as he tries to straddle the rift among Republicans between the traditional, hawkish conservatives and the harder-right, more anti-interventionist members whose support he needs to be elected speaker.

The House Republicans who are poised to run the committees with oversight of the war should they win the majority are largely hawks who have backed the aid to Ukraine, indicating that some in the party may be reluctant to turn their backs on Kyiv. And many Democrats have supported the money for Ukraine, suggesting that even if most Republicans were opposed, the House could still muster bipartisan support to approve such aid.

Representative Michael McCaul of Texas, the top Republican on the Foreign Affairs Committee, told Bloomberg News on Tuesday in response to Mr. McCarthy’s remarks that there was still “broad bipartisan support” for aiding Ukraine.

“We want to ensure that our NATO partners are stepping up to the plate and bearing the burden of the cost,” Mr. McCaul said, adding of Mr. McCarthy, “I think he’s just saying we’re not going to write a blank check without oversight and accountability, which my committee will be providing.”