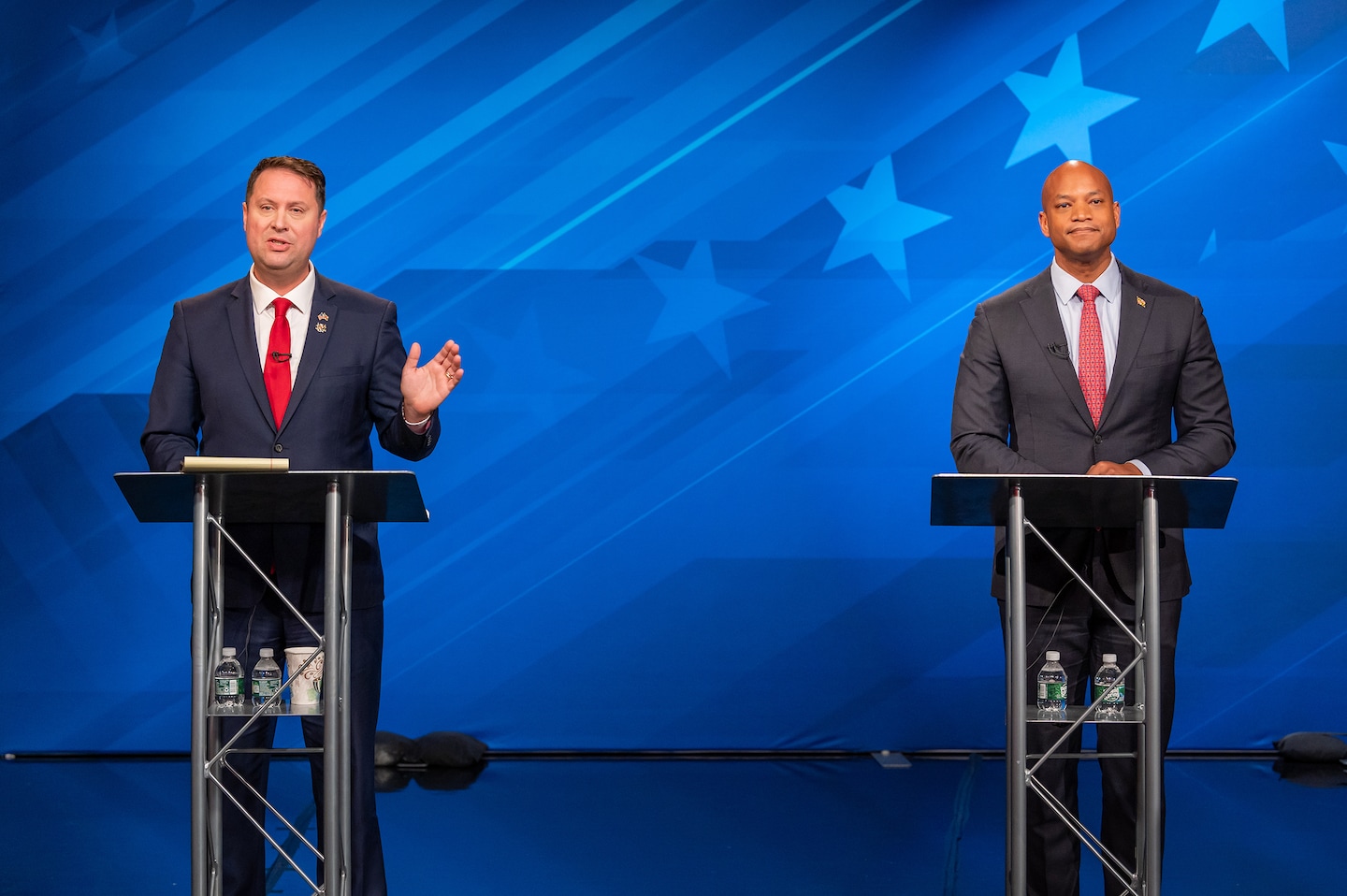 Maryland gubernatorial hopefuls Wes Moore and Dan Cox put mutual contempt on display Wednesday in an hour-long debate that highlighted how the majority political parties developed radically different views of our country’s problems and where the nation should be headed.

They clashed over each other’s credibility, the definition of freedom, and their stances on abortion, crime, election integrity, LGBTQ rights and the existence of a racial wealth gap.

The sole scheduled confrontation in a lopsided campaign, the debate offered Cox a rare chance to pierce the air of inevitability around Moore. Moore, the Democratic nominee who is ahead in the polls by 32 percentage points, sought to motivate voters in the deeply blue state to show up and cast a ballot by painting Cox as extreme.

Cox, a far-right, conservative state delegate endorsed by former president Donald Trump, had the most at stake heading into the exchange. Moore, a best-selling author and former head of one of the country’s largest poverty-fighting organizations, holds a commanding fundraising lead with four weeks remaining until Election Day.

The debate, which began and ended with the two men shaking hands, was often contentious and at times aggressive.

In a series of sharp exchanges, Cox called Moore’s efforts to close the racial wealth gap a “racist” transfer of resources, and Moore labeled Cox “an extremist election-denier.”

Cox called Moore a “phony,” claiming that his book “The Other Wes Moore” was full of passages that were “completely false.” Moore has previously fended off claims he misconstrued whether he was born in Baltimore. He later said Cox, who has claimed the 2020 presidential election was “stolen,” was a candidate with “dangerous and divisive” policies.

Trump, election denial, QAnon and Dan Cox: In Maryland, the GOP marginalizes itself

Some of the sharpest divisions came as the men discussed abortion: Moore said Maryland should be a “safe haven” for health-care decisions made between a woman and her doctor, and Cox said he was “pro-life” and would “ensure that everyone is safe and that women and children and the unborn all have equal protection and they are supported by our laws.”

Both candidates tried to harness the popularity of Gov. Larry Hogan (R) by drawing favorable comparisons to the term-limited governor. Hogan has not given an endorsement in the race, but he has called Cox a “QAnon whack job” whom he doesn’t see fit to tour the governor’s office, let alone lead it.

Yet Cox tried to align himself with Hogan during the debate, saying he’s worked on the governor’s crime task force and stood with him against tax increases.

Asked by a moderator to give Hogan a letter grade, Cox awarded an “A,” with the exception of how the governor handled pandemic restrictions. Moore pointed out that Cox tried to impeach Hogan over those restrictions.

“He stood alone,” Moore said. “Even his Republican colleagues did not do that.”

Moore evaded the letter-grade question, offering Hogan an “incomplete” but praising him for “being so early and full-throated about the danger of this MAGA movement.”

Moore went on to say that the economy has not improved fast enough for enough people. He said that as governor, he would try to make sure people have the right skills to apply for open jobs, to focus on public education that values more than college acceptance, and to expand access to affordable child care so that women who want to rejoin the workforce have an easier route.

Cox shot back that Moore’s proposals are costly, predicting: “You are going to see tax increases like never before. The tolls are going to rise.”

As he did several times during the hour-long debate, Moore responded, “That is not true.”

Cox also accused Moore of supporting “transgender indoctrination in kindergarten,” which Moore said is not something he has ever said.

Pressed by a moderator to explain what he thinks is happening in elementary schools, Cox said he believes kindergartners see a book called “Gender Queer” that depicts acts “so disgusting” he could not describe them on television. The book, which has become a target of the conservative-dominated parent’s rights movement across the country, is a memoir by Maia Kobabe about growing up asexual and nonbinary.

Moore, in turn, went on to say Cox’s proposals to reduce income taxes and business taxes would eliminate the state’s prime source of revenue and bankrupt the state. “That’s not an ideological position,” he said. “That’s math.”

Cox has not detailed the extent of his tax cuts, but he broadly proposed eliminating or reducing them.

The candidates disagreed over issues as fundamental as the legacy of racism and wealth in this country.

When a moderator asked the candidates about reparations and how to deal with the toll of inflation that, given the long-documented racial wealth gap, falls heavier on many Black families, Cox rejected the premise of the question and called his opponent “racist” for suggesting “reparative actions,” such as fixing the state’s procurement system and addressing discriminatory practices in home appraisals.

Cox said the only wealth gap that deserves reparations is one that was created by lockdowns during the pandemic. He accused Moore, who has made equity a pillar of his campaign pitch, of “transferring wealth away from people because of their skin color. That is racist; it’s wrong.”

Moore, who is Black and led a poverty-fighting nonprofit called the Robin Hood Foundation, shot back with a touch of exasperation.

“The impacts of racial disparities did not start two years ago, Delegate Cox,” he said. “We are watching something that has been a long-term challenge that our state has got to wrestle with and address. The fact that we have an 8 to 1 racial wealth gap in our state is real. It’s not pretend, and it’s not because one group is working eight times harder.”

Cox, who unsuccessfully challenged plans to count mail-in ballots early, again refused to say whether he planned to accept the results of the election in November, saying to do so would be akin to declaring a surgery a success before it has taken place. He noted that the state affords candidates the right to question an election and said he intended to uphold that process.

Cox has struggled to pivot from the far-right stances that consolidated GOP support in the primary. Cross-party appeal is critical for Republicans in Maryland, where registered Democrats outnumber Republicans 2 to 1.

Meanwhile, Moore, who is making his first bid for public office, said after winning the primary that he wants general election voters not just to cast a ballot against Cox, but also to support Moore’s vision for the state.

As a political newcomer, Moore is still introducing himself to voters — particularly the disaffected Republicans and independents he is wooing. He had accumulated $1.3 million in his coffers as of late August, outraising Cox by a 10-1 margin.

Cox, who has criticized Moore for not agreeing to more debates, said after the debate that he hopes his opponent’s campaign will agree to more.

Asked if he wished to share the stage with Cox again, Moore smiled and said: “I think I’m good.”