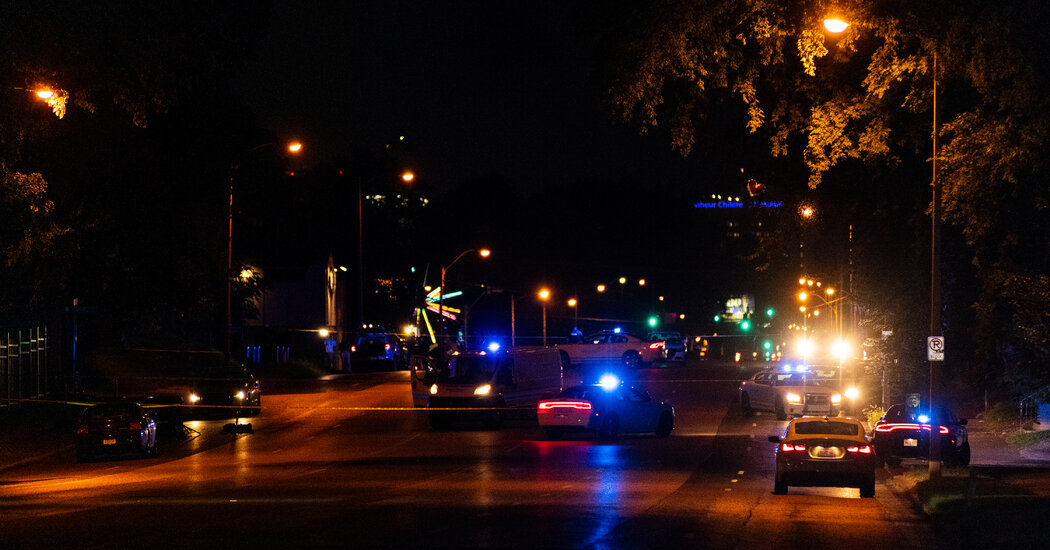 A string of shootings in Memphis that left four people dead and three others injured led the authorities on a feverish police manhunt that effectively closed down Tennessee’s second-largest city until the police announced late Wednesday night that they had captured a 19-year-old suspect.

At a news conference early Thursday morning, Mayor Jim Strickland condemned what he called a “senseless murder rampage.” He said that he was “angry for our citizens who had to shelter in place until this suspect was caught. This is no way for us to live, and it is not acceptable. The people of our city were confronted with the type of violence no one should have to face.”

The Memphis Police Department identified the suspect in the rampage, which the authorities said included no fewer than eight crime scenes and crossed into neighboring Mississippi, as Ezekiel Kelly.

He was expected to face numerous felony charges and was being transported to the jail to be formally booked.

The manhunt, which began around 6 p.m. Wednesday after the authorities were alerted about a shooting on Facebook Live, prompted the authorities to encourage residents to stay inside. “If you do not need to be out, please stay home!” the City of Memphis said on Twitter.

In light of the threat posed by a man who seemed to be driving around the city randomly shooting people, the Memphis Area Transit Authority suspended its trolley and bus service. The University of Memphis, already shaken by the recent abduction and killing of a woman jogging near the campus, went on lockdown.

At the news conference, Chief Cerelyn (C.J.) Davis of the Memphis Police Department laid out a detailed timeline of the shooting spree, saying that Mr. Kelly’s crimes started just before 1 a.m. Wednesday, when a 24-year-old man was shot and killed in his driveway in the 3100 block of Lyndale Avenue.

Mr. Kelly began again around 4:30 p.m., she said, when Memphis Police reported two shootings at separate locations that were minutes apart. A shooting on East Parkway South left a man dead after being shot inside his car, they said. In the second shooting, they said, a woman was shot in the leg on Norris Road near the southbound ramp to Interstate 240 and taken to a hospital in noncritical condition.

By about 6 p.m., Mr. Kelly was on Facebook Live when he barged into an AutoZone store and critically wounded a man, the authorities said. Officers were soon alerted about the video and started investigating Mr. Kelly and alerting residents to the potential danger, Chief Davis said.

The authorities said that he then carjacked a woman, fatally shooting her in the process, at Poplar Avenue and North Evergreen Street.

Two more shootings occurred after that, Chief Davis said, that left another woman dead and one man injured. Another person was also carjacked, though uninjured.

Chris Smith, 47, was shopping in Walmart when she first heard the news that a gunman was driving around Memphis.

When Ms. Smith arrived home to her apartment complex near Poplar Avenue, neighbors and witnesses told her about the harrowing shooting that she had barely missed.

The gunman was driving down the street when he wrecked his car and started weaving between cars on foot with a gun in the air. He came upon a woman, pulled her out of the car and shot her multiple times, Ms. Smith said. Onlookers told Ms. Smith that the gunman then drove away in the gray SUV as someone tried to resuscitate the woman.

Ms. Smith said she has been mugged at gunpoint several times and given the rampant gun violence across the country, the 30-year Memphis resident said she wasn’t surprised that something like this happened.

Court records show that a warrant for first-degree murder was issued Wednesday for Mr. Kelly, though it was not clear what crime that was for. In 2020, he was also charged with two counts of attempted first-degree murder, possession of a firearm and reckless endangerment with a deadly weapon. Then 17, he was initially charged in juvenile court, the records said, but his case was transferred to adult court. Mayor Strickland said he was sentenced to three years in prison after pleading guilty to a lesser charge, aggravated assault, but served only 11 months and was released from prison in March.

“If Mr. Kelly served his full three-year sentence, he would still be in prison today and four of our fellow citizens would still be alive,” the mayor said.

Numerous officials spoke about the recent violence plaguing the city.

“This has been a painful week in our city,” Mr. Strickland said. “But I have hope for Memphis, I have love for Memphis, and I know that, united, we will endure.”