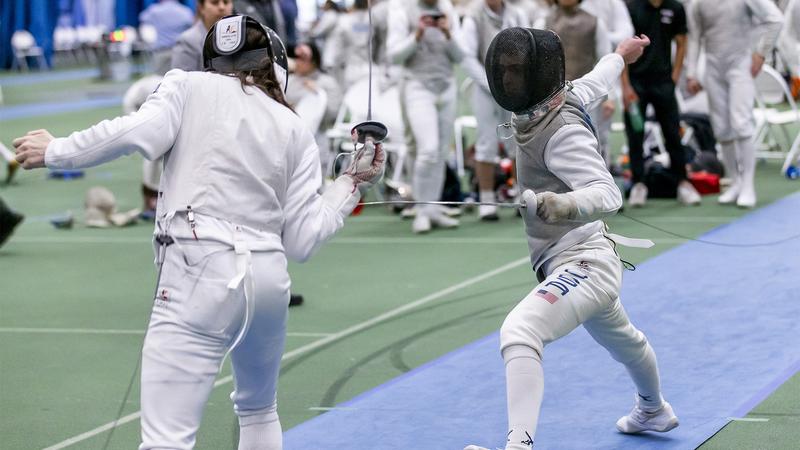 
POUGHKEEPSIE, N.Y. (November 13, 2022)  –  Fifth-year Andy Faubert finished with a team-high 15 wins to lead the Stevens Institute of Technology men’s fencing team to a 6-1 day Sunday at the Vassar College Invitational.

Sophomore Colin Mahoney and classmate John Morreale totaled 14 and 10 wins, respectively for the Ducks, who saw 17 different fencers finish the day with a winning record.

As a team, the Ducks went 6-1 on the day, with wins over LIU, Drew, Vassar, Cleveland State, Sacred Heart and Yeshiva. The only setback of the day came to Cornell by a narrow 15-12 margin. The 6-1 day moved Stevens’ record to 17-2.

“The guys fenced great today,” head coach Jim Carpenter said. “We knocked off a couple of tough Division I teams and held off traditional rivals Vassar and Drew. Really happy with the way Christopher Stone and Andy Faubert stepped up their games today.”

As a team, the Ducks had an impressive day on the strips, finishing with a 132-57 record. For the second straight meet, it was the epee group that posted the best record among the three weapons, ending competition with a 49-14 mark and a perfect 7-0 record.  Both the sabreists (43-20) and the foilists (40-23) went 6-1 on the day, with each weapon falling to Cornell.

Individually, first-years Nick Reznick (foil) and Andrew Yurovchak (epee), along with sophomore Rocco Mathews (foil), each finished the day with nine wins. Sophomore Nicholas Smith (epee), joined sophomore Thomas Cheng (foil) and first-year James Glover (foil) in posting eight wins each, while junior Christopher Stone (sabre) had seven. First-year David Ryder Bidwell and graduate student Matthew Jacobson (sabre) totaled six wins each, with first-year Aden Vishnevsky (foil), junior Erik Marran (epee) and senior Patrick Pan each adding four to the weapon and team totals. Seniors Jack Corridon and James Morris and junior Caleb Romero each had three wins, with sophomore Evan Peneiras and senior Andrew Bauman each posting one to round out the victories for the day. The victories by Romero and Peneiras were their first of the season.

Stevens began the day with consecutive 22-5 victories over LIU and Drew. Stevens has won both meetings this season with the Sharks and each of the last seven meetings with Drew. Stevens then defeated the hosting Brewers by nine before dropping its only match of the day to nationally-ranked Cornell, although the Ducks’ epee squad posted a decisive 7-2 win. The Ducks then closed out the day with wins over Cleveland State, Sacred Heart and Yeshiva. Stevens leads the all-time series with the Vikings 3-0, while the Ducks have won three of the last four matchups with the Pioneers. To cap the day, the Ducks toppled Yeshiva for the 31st straight meeting.

Up Next: Men’s Fencing returns to the strips on Nov. 18 for the Columbia University Invitational.