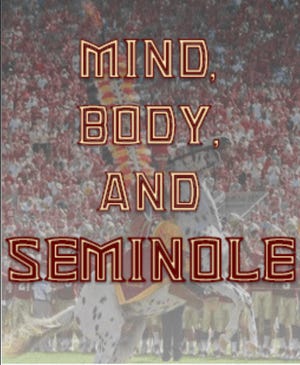 Student-athletes across the nation are placed under physical stress to perform at the peak of their abilities. What is often not talked about is the mental strain associated with playing sports at the college level. Between schoolwork, social life, and relaxation time, it is often difficult for athletes to juggle their lives and sport in a healthy ratio. At FSU the school offers division one athlete’s access to specialized mental health services to provide an outlet.

It is easy to forget that student-athletes are human. They are constantly on the news, radio stations, and written about in papers that it is hard to remember they are not just athletes but real people with thoughts and feelings. As a society we tend to ignore those who are in the public eye because it’s difficult to believe such people could have problems. With publicity comes accolades, but also backlash from media and fans. Bullying and body shaming is commonly experienced by athletes through the media. This can lead to a variety of mental health issues that athletes often battle on their own due to lack of resources.

Florida State’s department of Sports medicine offers a service known as “Mind, Body, and Seminole”. The department specializes in supporting athletes in the following areas: addiction, eating disorders, grief counseling, anxiety and depression. Student-athletes who are seeking counseling can contact the Director of Clinical and Sport Psychology Keely Kaklamanos by calling 850-228-0252 or emailing kkaklamanos@fsu.edu.

The NCAA provides athletes with the tools to be successful in school and take care of their bodies, but what do they do to support mental health? Following the pandemic there has been a rise in stress, anxiety, and depression amongst student-athletes. According to research conducted by the NCAA, “When asked whether they thought their mental health was a priority to their athletics department, 55% of men’s sports participants and 47% of women’s sports student-athletes agreed or strongly agreed.”

These numbers reflect poorly on the NCAA’s prioritization of mental health for athletes involved in the organization.

Oftentimes athletes believe seeking mental health services shows weakness. However, having a sound mind will lead the body to perform to the best of its ability. Watty Piper, author of the children’s book “The Little Engine That Could” drives this idea home in his story of an engine that is having difficulty overcoming a hill. The engine started reciting “I Think I Can, I Think I Can” until he conquered the hill. Many times, in sports it isn’t about physical capability, but mentally believing you can perform a certain skill.

Athletes at the professional level have come forth in recent years to share their struggles with mental health and encourage others to seek support. For example, Simone Biles of USA gymnastics came forward after her traumatizing experience with trainer Larry Nassar. She dropped out of competing in the All-around and team events at the 2020 Olympic Games in Tokyo to take care of her mental health. Biles endured tireless hours of intense training all while being abused which understandably deteriorated her mental health. Although she was criticized in the media for “abandoning” her team, she didn’t let that stop her from finding the help she needed and spreading awareness for other young athletes.

Student-athletes should feel free to address psychological concerns they have in a safe and confidential environment. Florida State and many other universities have adopted similar services to “Mind, Body, and Seminole” to assist athletes in receiving the help they need.

It becomes the responsibility of the coaches, athletes and universities working collaboratively to ensure students are healthy both physically and mentally. Although Florida State and other universities have taken initiative, there is still work to be done to remove the stigma surrounding mental health in sports.