Miami-Dade County Was Once a Lock for Democrats. Not Anymore. 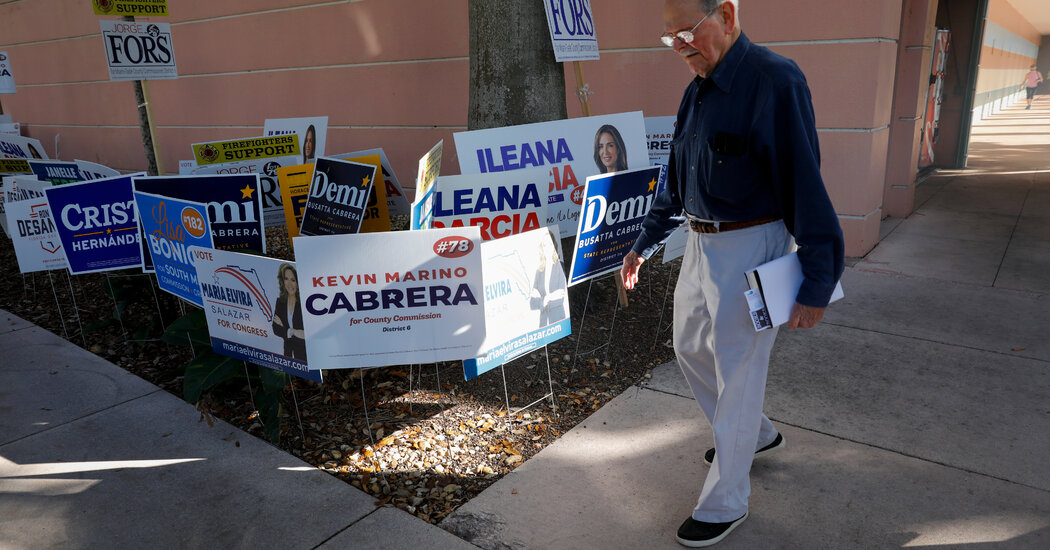 Republicans believe they have a good chance of capturing Miami-Dade County in the Florida governor’s race for the first time in two decades on Tuesday, a feat that would have been nearly unthinkable only six years ago, when Hillary Clinton won the pivotal county by a staggering 29 percentage points in her presidential contest against Donald J. Trump.

“Republicans will win Miami-Dade County come Nov. 8,” Jeanette M. Núñez, the lieutenant governor, predicted at a rally in the Hispanic enclave of Doral last month, saying out loud what political types around town had started to predict in private about her ticket with Gov. Ron DeSantis.

Democrats believe it could happen, too.

“The way the numbers are going, they could win it, absolutely,” said State Senator Annette Taddeo, a Miami Democrat who is running for Congress in a district that was recently among the nation’s most competitive but now leans Republican.

The fact that flipping Florida’s most populous urban county is being openly discussed at all speaks to the drubbing that nervous Democrats fear and confident Republicans foresee in Tuesday’s midterms, which will likely end Florida’s era as a purple swing state and turn it at least a shade of pink.

On Wednesday, a day after President Biden rallied with Democratic candidates in Miami Gardens, the number of registered Republicans who had voted early in Miami-Dade County surpassed the number of registered Democrats who had done so. Democrats, who still comfortably outnumber Republicans in Miami-Dade in voter registration data, typically make their biggest early voting push the weekend before Election Day, but the strong Republican showing so far has put Democrats further on edge. Even if Democrats were to win Miami-Dade by a small margin, the party’s statewide math would almost certainly not add up to victory.

The repercussions of a red Miami-Dade County could extend far beyond Florida. Democrats expect Republicans, as they have done in the past, to take whatever strategies and messages succeed here to other communities rich with Hispanic voters, in places that are now more closely contested battlegrounds. Of the 2.7 million people in Miami-Dade, more than two-thirds identify as Hispanic, according to census data.

“Republicans will feel emboldened and take it as a playbook and go around the country to communities in Nevada and in California and in Virginia and in Pennsylvania,” said Christian Ulvert, a Democratic political consultant in Miami. “It should be a massive warning sign to Democratic leaders across the country.”

Mr. Trump is scheduled to rally on Sunday in western Miami-Dade County with Senator Marco Rubio and other Republican contenders — though notably not Mr. DeSantis, a likely Trump rival for the 2024 presidential nomination.

Mr. DeSantis, who lost Miami-Dade by 21 percentage points in 2018, plans to campaign on Monday in Hialeah, a heavily Cuban American and Republican city northwest of Miami. (He signed legislation this year designating Nov. 7, the day before Election Day, as “Victims of Communism Day.”)

The last Republican candidate for governor to win Miami-Dade was Jeb Bush, who had been a longtime resident of the county, in 2002; Mr. Rubio, who also lives in the county, won a plurality of the county vote in 2010, but he lost it by 11 points in 2016.

Democrats used to rely on a few big, urban Florida counties such as Miami-Dade to drive turnout, knowing that they would inevitably suffer losses in the state’s many rural and suburban counties. Former President Barack Obama won Florida in 2008 and 2012 by getting Democrats in cities to the polls and minimizing the party’s loss margins in the rest of the state. But since then, just one Democrat has been elected to statewide office.

Public opinion polls suggest that Mr. DeSantis is leading his Democratic rival, Charlie Crist, a former governor and congressman who has not generated strong enthusiasm, by as much as 10 percentage points. Mr. Rubio is ahead of Representative Val B. Demings, an Orlando Democrat, by a smaller but still comfortable margin. Not long ago, such ample leads were inconceivable in Florida statewide elections.

A lurch to the right took place two years ago, after Mr. Trump defeated Mr. Biden in Florida by three percentage points. Miami-Dade County was key to Mr. Trump’s victory: Mr. Biden won it by a mere seven points after Hispanics swung to Mr. Trump, a gut punch to Democrats nationally.

Both Democrats and Republicans agree that the coronavirus pandemic was a turning point that pulled more voters in South Florida, where the local economy relies heavily on small businesses and the hospitality industry, toward Republicans. Mr. DeSantis has campaigned on his decisions to reopen schools and businesses early in the pandemic.

“Democrats failed to connect with a lot of Latino families,” said former Representative Carlos Curbelo, a moderate Republican who lost his seat in 2018. “These are workers who rely on tips oftentimes to get ahead. Their children many times are English language learners, so not going to school means falling back.”

He and others, including several Democrats, also pointed to a Democratic message perceived by at least some Hispanics as too focused on social issues, identity politics and problems such as racism and inequality. Mr. DeSantis has portrayed himself as a culture warrior against the “woke left” who has also focused on keeping the state’s economy humming.

“The further we get away from dollars and cents, the less we make sense with voters,” Mr. Ulvert said.

In recent election cycles, Democrats amassed a cushion of early votes cast by mail and in person with the hope that Republicans could not overcome it with their typically huge turnout on Election Day.

In the 1980s, Republicans built a powerhouse in Miami-Dade County, bringing into the party Ronald Reagan-loving Cuban Americans who had previously registered as Democrats. Cuban exiles who had lived under the dictatorship of Fidel Castro became staunch conservative voters who elected their own to influential offices. Democrats pulled support from non-Cuban Hispanic, Black and liberal white voters. Over time, as older Cubans died and some of their children and grandchildren voted less reliably for Republicans, the Democratic coalition grew.

The reversal for Democrats has been all the more striking because they had appeared to make significant gains in Miami-Dade County. Younger Cuban Americans broke with their conservative-leaning parents and voted for Mr. Obama. In 2018, a non-Hispanic Democrat won a county commission seat in Little Havana. As recently as January 2019, just one local member of Congress was a Republican.

Democrats’ demographics-as-destiny argument — that Florida would become bluer the more Black and Hispanic its electorate became — did not hold up in the 2020 election. Since then, the party’s support among Hispanics, South Florida’s pre-eminent voting bloc, has continued to erode. Democrats have also struggled with white voters who do not have college degrees, Black men and Black voters of Caribbean descent, who tend to lean more conservative than African Americans. Democrats worry about the misinformation that is rampant, especially in Spanish and Haitian Creole.

“I know a ton of Jewish voters who used to be rock-solid Democrats who are now voting Republican,” he said. “They feel the Democratic Party has not done enough to combat antisemitism from within.”

Other Jewish Democrats who once helped keep Miami-Dade blue have moved north to Broward and Palm Beach counties over the decades. Broward, which has largely even shares of white, Black and Hispanic residents, remains the state’s most reliably Democratic urban county.

While Democrats have floundered, the Republican Party, despite being roiled by the growing presence of far-right members, has maintained a year-round presence in Miami-Dade County, where for decades it has succeeded at persuading Hispanics to vote for Republican candidates and run for office. Last year, the Republican National Committee opened a Hispanic community center that among other things holds prep sessions for the civics portion of the U.S. citizenship exam.

“Republicans have played the long game in Florida, meeting Floridians wherever they may be and taking no voter for granted,” Julia Friedland, a party spokeswoman, said in a statement.

For years, Ms. Taddeo, the Democratic state senator running for Congress against Representative Maria Elvira Salazar, a Republican, has criticized her party for failing to maintain an operation in South Florida comparable to Republicans’ after Election Day.

“I don’t know how many times I have said, ‘This is happening, guys,’” Ms. Taddeo said this week, referring to Republican momentum in Miami-Dade. “It is the lack of being present always, not just come election time. The lack of infrastructure and planning. And also candidates that people can be excited about. That’s really important.”

She heaved a big, disappointed sigh.