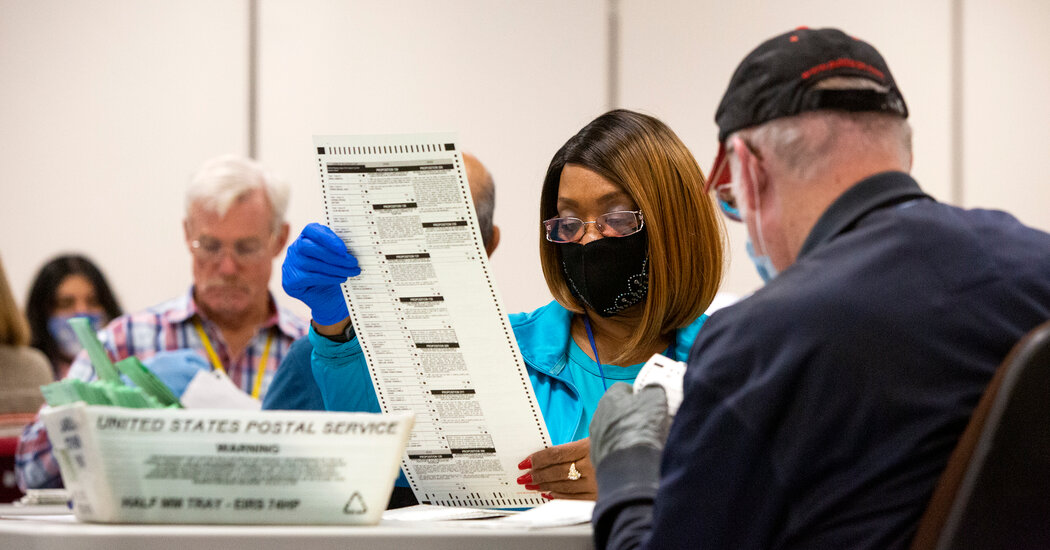 For months, election officials have worried that activists convinced that the election system is corrupt and broken would cause significant problems in the midterms. But the scattered episodes during the vote did not disrupt the system.

The relative calm so far had election officials breathing a sigh of relief, even as they remained concerned about specious legal challenges and misinformation that could erupt in the coming weeks. They praised tactics they believe reinforced a system that was rocked by the baseless claims of fraud and widespread distrust after Donald J. Trump’s attempt to overturn the 2020 presidential election.

They pointed to better and more frequent communication by elections officials, and transparency measures such as live cams at ballot boxes and in counting rooms. Some speculated that polling and right-wing media reports promising a Republican blowout in races across the country may have discouraged some right-wing activists from provocations at polling places.

“It was remarkably smooth,” said Damon Circosta, the chairman of the North Carolina State Board of Elections. “You can tell by my giddiness I was not expecting that.”

Over the past two years, a movement of conspiracy-theory-minded activists has loudly questioned and undermined the country’s electoral system. Their efforts have found backing from conservative organizations, deep-pocketed supporters and right-wing media influencers and created concerns about the potential for violence, intimidation and vigilantism on Election Day.

But the incidents reported by officials this week were far less stark. Despite widespread accusations of fraud, Republican candidates so far have mostly accepted the results when they’ve lost — including some of the loudest promoters of election conspiracy theories. Mr. Trump’s calls for “Protest!” in response to relatively routine technical problems in Arizona and Michigan have so far been largely ignored.

Early signs indicate that turnout was relatively high, particularly in battleground states, suggesting that voters were not deterred by the noise.

Dozens of races are still undecided and counting could continue into next week in a few places. Two states in particular, Nevada and Arizona, feature several election-denying candidates in tight races and elections lawyers say they are gearing up for legal challenges aiming to once again put the soundness of the system on trial.

On Thursday, Mark Finchem, the Republican candidate for secretary of state in Arizona, disparaged the election system in Maricopa County, home to Phoenix, and compared one part of the process to the notorious hanging chads of the 2000 election in Florida.

There were serious stresses for elections officials and others working to protect voting.

Up until the moment polls closed, election administrators were still getting calls with claims about supposed flaws in the voting equipment, while poll monitors in some precincts hounded elections workers with questions about the machinery. In a few cases, people tried to disrupt voting or prevent voters from casting ballots. And technical glitches in multiple jurisdictions were seized on by Republican candidates, election deniers, right-wing influencers and Mr. Trump. Such misinformation is bound to further damage the confidence of at least some portions of the public.

In some places, clerks and monitoring groups say they are still concerned that election deniers on boards charged with certifying the vote could try to disrupt the process.

“There are definitely still things for us to be concerned about,” said Orion Danjuma, a lawyer for Protect Democracy, an elections integrity group. Last month he helped the group file successful legal challenges to self-appointed vigilantes who patrolled ballot drop boxes in Maricopa County, at times carrying long guns and wearing body armor.

He said the victory in Arizona might have been enough of a shot across the bow to stop some activists, but emphasized that the most serious attacks on elections didn’t emerge until weeks and months after the 2020 election, when lawyers for Mr. Trump repeatedly sought to reverse the outcome. “We’re poised to be ready for more lawsuits,” Mr. Danjuma said.

Indeed, Kelli Ward, chairwoman of the Arizona Republican Party, vowed to pursue such actions. “We have been preparing for this for over a year,” she said in a tweet on Thursday. “We have a huge team of lawyers ready to take action if needed.”

Regardless of Tuesday’s results, voices pushing election conspiracy theories are unlikely to be muted anytime soon. On Wednesday morning, the organizer of a coalition of election deniers in Michigan urged the group to redouble its forces despite the fact that Democrats swept nearly every major race in the state.

“We can choose to curl up on the ledge and succumb, or we can dust ourselves off and restart the arduous climb up the steep slopes” of election integrity, wrote Patrice Johnson, the organizer of Michigan Fair Elections in a blog post. The group’s next online meeting was scheduled for Thursday.

One of Michigan Fair Elections’ preferred candidates, Kristina Karamo, running for secretary of state, has not conceded despite losing by 14 percentage points and on Thursday afternoon sent out a list of supposed electoral “violations,” saying there was more to come.

Concessions by candidates who spread unfounded theories of voting fraud are critical to ensure the stability of the election system, elections experts say. In addition, they note public outreach from election officials can help put out fires.

After receiving calls and emails from voters demanding that their ballots be counted by hand rather than on machines, which many activists falsely believe can be manipulated, Fred Sherman, the election chief in Johnson County, Kan., came up with a solution. Voters who raised that question in the district, Kansas’ most populous, would be given the option to place their ballot in a specially marked white envelope in a sealed red ballot bag and were given assurances that they would be hand counted.

About 300 of the 250,000 people who cast ballots in Johnson County used the red bags, Mr. Sherman said, and it appeared to solve the issue.

“They obviously created a little bit of turbulence,” Mr. Sherman said. “It’s like running a treadmill always on incline.” Mr. Sherman said he’d like “an easy run and you don’t have that when you have constant election denial.”

According to Douglas Wilson, a Democratic strategist in Charlotte, N.C., polling predicting a large Republican wave may have also worked to cool the ardor of election deniers. Under that logic, he said, attempts to undermine faith in the results would only have discouraged Republican voters.

“Republican friends kept telling me every day Democrats were going to be wiped out,” said Mr. Wilson.

Spurred by concerns about election deniers, numerous voting rights groups began their own preparations well ahead of Tuesday.

One coalition, called Election Defenders, organized dozens of sessions to train people posted at polling places to help prevent voter intimidation. Its goal was to recruit 1,250 volunteers, but instead was overwhelmed with more than 2,000 people who completed several hours of online training on how to intervene in tense situations, dispel confusion, de-escalate confrontations with potentially armed activists and, more than anything, keep things calm.

“We had the good problem of more people signing up than we had a place to put them,” said Tiffany Flowers, a lead organizer of the campaign. She said she worked 20 hours on Tuesday monitoring social media and checking in with partners around the country.

One of the few incidents came in late from Maricopa County, involving a man who tried to physically prevent a woman from entering a voting center minutes before it was set to close. Ms. Flowers said several Election Defenders on hand stepped up and escorted the woman in, then waited outside to walk her back to her car afterward.

“I strongly believe that there are more Americans who wanted to see everyone who was eligible to vote be able to vote fairly, freely and with dignity,” Ms. Flowers said.

A correction was made on

An earlier version of this article incorrectly described Ms. Flowers’s hometown and the nature of her involvement in election protection efforts on Election Day. Ms. Flowers is from Baltimore, not Atlanta, and worked remotely on Election Day, rather than visiting polling places in person.

How we handle corrections