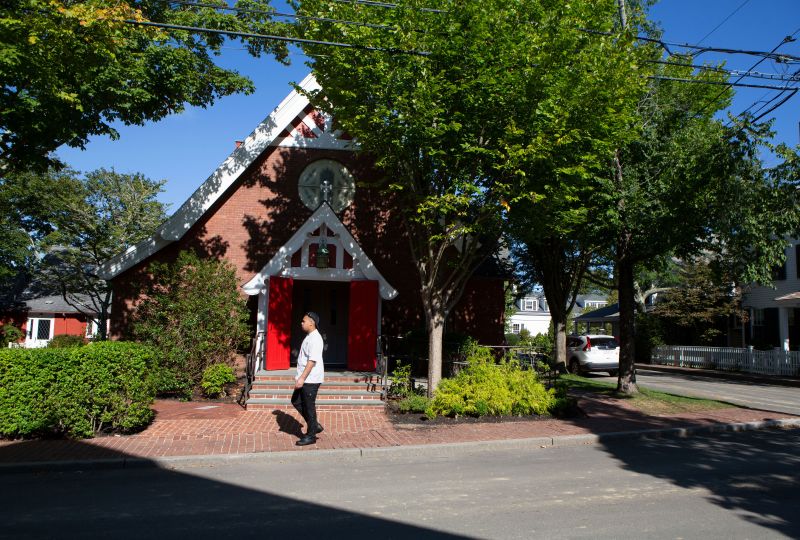 After sharing hugs and teary goodbyes with roughly 50 migrants who had arrived unexpectedly by plane on this affluent vacation island, the volunteers who sheltered them at an Episcopal church carried out tables and chairs, packed food onto trucks and folded portable cots.

A familiar quiet had descended by Friday afternoon on the tree-lined downtown block on Martha’s Vineyard, where Jackie Stallings, 56, could not stop thinking about a young Venezuelan – she was 23 but looked 15 – who sat with her in the St. Andrew’s Parish House the night before.

The asylum seeker showed Stallings cell phone video taken during the journey across a remote Central American jungle, pointing out migrants who died along the way.

“It was like she was showing me cat videos but it was actually their journey and what they endured to get here,” said Stallings, a member of the Martha’s Vineyard Community Services nonprofit. “There were bodies and moms with babies trying to get through mud that was like clay.”

“The heartbreaking part is seeing these beautiful young ladies become desensitized,” said her husband, Larkin Stallings, 66, an Oak Bluffs bar owner who sits on the nonprofit’s board. “For them, they just flip and show you a picture.”

Stallings cut him off.

“She was like, look, this one died, part of their original party. And he died and this one died. The mud is like to up to here to them,” she said Friday in the shade of the parish house porch, pointing to her thigh. “And you see them, they literally have to lift their legs out the mud. They die because they get stuck.”

During their whirlwind 44-hour visit this week, migrants like the young Venezuelan woman left an indelible mark on their accidental hosts in this isolated enclave known as a summer playground for former US presidents, celebrities and billionaires.

Days of uncertainty on the small island off the coast of Massachusetts and a massive effort by locals to provide for them ended with a new odyssey – a ferry ride and then another bus caravan to temporary housing at Joint Base Cape Cod.

The asylum seekers – most of them from Venezuela – had been flown from Texas to Martha’s Vineyard on Wednesday under arrangements made by Florida Gov. Ron DeSantis – part of a series of moves by Republican governors to transport migrants to liberal cities to protest what they describe as the failure of the federal government to secure the southern border.

Martha’s Vineyard had not been expecting them but a small army of activists mobilized to help people who had become pawns in the contentious debate over America’s broken immigration system.

DeSantis’ move was sharply denounced by the White House, Democratic officials and immigration lawyers who vowed legal action on grounds, they said, the migrants were lured north with promises of work, housing and help with immigration papers and ultimately misled about their final destination.

Florida’s governor denied the migrants did not know where they were going. He said they had signed a waiver and had been provided with a packet that included a map of Martha’s Vineyard. “It’s obvious that’s where they were going,” he said, adding that the move was voluntary.

Lisa Belcastro, winter shelter coordinator for the Harbor Homes nonprofit, was close to tears about an hour after the migrants left the island on Friday, with volunteers beginning to clean up the parish house and church hall where the newcomers slept.

On Thursday night, a group of young male migrants congregated on the narrow street outside the church, just blocks from the glittering upscale shops, restaurants and art galleries on Main Street in Edgartown. One asylum seeker, in his early 20s, ventured down the street to explore at one point. He asked about the price of a hamburger at a fancy eatery. When told it was $26, he noted that was much more than he earned in a month in Venezuela when he could find work.

Through a front window in the parish house, young children could be seen in a playroom filled with books and stuffed animals.

Juan Ramirez, who is 24 but appears younger, stood outside the hall of the 123-year-old church – where 18 of the men slept on portable cots and inflatable mattresses under donated blankets for two nights. He teared up talking about the family he left behind in Táchira state in western Venezuela when he embarked on his journey in late July with his phone and $400 in cash.

“My friends thought I was crazy for leaving, that I would never make it. I only want a better future for my family,” he said of his parents, grandparents and his favorite niece back home. “I try but it’s hard not to think about them.”

The cash was long gone and his phone stolen by the time Ramirez reached northern Mexico and the border with the United States, he said.

Ramirez and other migrants said they were released by US immigration authorities with an order to return for a hearing. In San Antonio, they were approached by a woman who offered them a plane ride to a shelter in the Northeast where there would be housing, jobs and assistance with immigration papers. The migrants were put up in a hotel until about 50 of them were assembled for the flight to Massachusetts.

“When we landed no one was waiting for us,” he said. “No one knew we were coming. We realized they had lied to us. But, thankfully, we came upon kindhearted people who have supported us with everything we need.”

Pedro Luis Torrealba, 37, said he left the Venezuelan capital of Caracas with his wife in mid July. Their two children – ages 6 and 11 – stayed behind with relatives.

The couple started the roadless crossing on the border between Colombia and Panama – the deadly Darién Gap – with more than 60 other migrants, Torrealba said outside the parish house on Thursday night. Only 22 completed the trek across the 60 miles of jungle and steep mountains, he said. Some fell from cliffs, others were swept away by flood waters.

Those deaths are occurring at a time when a record number of undocumented migrants are overwhelming the US-Mexico border and dying while attempting to cross.

In Mexico, Torrealba said, the couple and other migrants were briefly abducted by members of the Zetas cartel, a violent drug trafficking organization. When he told them he could not make the extortion payment to allow them to continue, he said, a cartel member used pliers to pull out his two gold teeth.

They finally made it across the US-Mexico earlier this month. In San Antonio, they encountered a woman who offered them a free flight to a place they had never heard of, along with a promise of immigration assistance, housing and employment. Torrealba did not receive treatment for the injuries to his mouth and jaw until they arrived on Martha’s Vineyard.

Another Venezuelan, David Bautista, 26, said he left San Cristóbal, the capital city of Táchira state, in late July. More than a month later he crossed the Rio Grande to Eagle Pass, Texas, from the Mexican border city of Piedras Negras. He said he was released by US immigration authorities after 11 days in detention. They gave him papers for an immigration hearing in Washington, DC.

At a migrant shelter in San Antonio, he too was offered the free flight and the benefits that supposedly came with it – including help with changing the date and location of his immigration hearing.

“I can’t tell you any more because I don’t know any more,” he said. “We’re all lost. We’re all in this together. We just know this is an island somewhere in the United States.”

Standing next to Bautista, a 52-year-old man named Osmar Cabral, who said he is from Portugal and has been living on Martha’s Vineyard for four months, handed the migrant a folded $100 bill.

“I’ve never met him before,” Cabral said. “But I came here with a friend because I wanted to help. We’re all brothers.”

His friend, Franklin Pierre, a Venezuelan who has lived on Martha’s Vineyard since 2015 and works for a party rental company, was there to speak with some migrants and offer them advice.

“You have to show up for your immigration hearing or you’ll be deported,” Pierre told Bautista and other young men gathered around him. “You’re arriving here after the busy summer season and work is hard to find. And winter is very cold, sometimes reaching 10 degrees below zero. Imagine that and not having work.”

At one point Thursday night, a group of lawyers who had interviewed the migrants told reporters outside the parish house that they were exploring legal action, claiming that due process and the civil rights of the migrants had been violated.

“This is a human rights violation. This is a constitutional violation,” Iván Espinoza-Madrigal, executive director for Lawyers for Civil Rights Boston, said as volunteers and other supporters applauded. “And we will hold the states and perpetrators accountable to the fullest extent of the law. This will not go unanswered.”

Some passersby recorded the scene on their cell phones.

Rachel Self, an immigration attorney from Boston, also drew applause.

“We’ve got their backs and they are not alone. And to that end, I would like to specifically thank Trader Fred for donating underwear because Martha’s Vineyard doesn’t have a Walmart down the street,” she said, referring to the migrants and a local retailer who stepped up to help them.

A bystander suddenly tossed a bag of chocolates.

“I brought the candy,” said Matt Frederick, 54, a local who said he works as a waiter and cab driver and lives in his car. He had been handing out bags of candy to the migrants on the street. He said he had spent $100 on the sweets.

“I just feel compassion,” he said, adding that he lives in his car because he refuses to pay the exorbitant rents on the island. “There are lot of people here who are struggling to get by. It’s not all rich people.”

On Friday, after the migrants had left Martha’s Vineyard, a volunteer with the Harbor Homes nonprofit, Sean O’Sullivan, disassembled the folding cots that 18 of the male migrants slept on in the parish hall.

“The year round community is very strong because you are kind of isolated here – whether it’s the ferry or the bad weather, you’re stuck here,” he said. “We’re used to helping each other. We’re used to dealing with people in need and we’re super happy – like they enriched us, we’re happy to help them on their journey.”

At the empty parish house hours after the migrants had departed, Charles Rus, the church organist and music director, said the place felt lonely.

“The governor of Florida got it wrong,” he said. “I think he thought we wouldn’t know what to do. And actually people here really give a damn. They really care.”

Jackie Stallings said she hopes to visit the migrants at the Cape Cod base, a temporary accommodation.

The migrants “will be housed in dormitory-style spaces … with separate spaces accommodating both individuals and families,” and families will not be separated, Massachusetts Gov. Charlie Baker’s office said in a news release. They will have access to services including legal, health care, food, hygiene kits, and crisis counseling.

“I kept telling them it was like a dormitory. I didn’t want to say you’re going to a military base,” she said. “We want to go make sure they’re OK.”