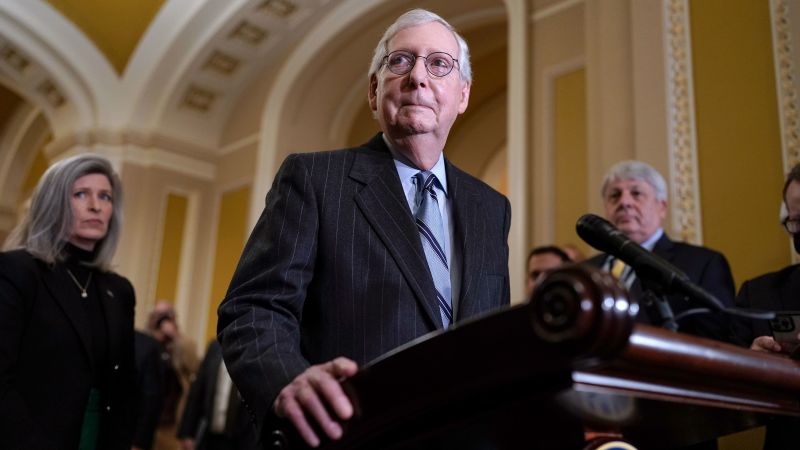 Senate GOP Leader Mitch McConnell has won a secret-ballot leadership election after days of finger-pointing over the Republican election losses, putting him on pace to become the longest-serving Senate party leader in US history.

McConnell defeated Florida Sen. Rick Scott, his first challenger in his 15 years atop his conference.

McConnell won the leadership vote 37-10-1, according to two senators. One senator voted present.

For Democrats, Majority Leader Chuck Schumer announced that their caucus leadership elections will be December 8, according to a source familiar at the Senate Democrats’ lunch on Wednesday.

After a tense meeting Tuesday that lasted several hours – the first in-person meeting for the Republican conference since the midterms – Scott told reporters he planned to challenge McConnell for the top job.

“I’m running for leader,” the Florida Republican told reporters. “I’m not satisfied with the status quo and so I think we ought to have an option.”

He added: “I still think we ought to delay the election.”

Throughout this year, Scott and McConnell have had a long-simmering conflict over messaging, outlook and how to spend resources this election cycle. The two have disagreed over the quality of their candidates, whether to engage in GOP primaries, whether to put forward an agenda or keep the focus on President Joe Biden, and where to compete.

Wednesday’s vote comes after Scott, as well as a handful of conservative senators, called for a delay in the leadership elections until after the Georgia runoff, underscoring Senate Republicans’ frustration with the outcome of the 2022 elections. That effort to push back the vote failed during the closed-door meeting, though 16 GOP senators voted to delay the GOP leadership elections, according to a source familiar.

And while Scott has little chance of succeeding in his bid to be leader, his declaration is seen as a protest vote. He’ll become the first challenger McConnell has faced in his time as GOP leader.

During the closed-door hearing with his Republican colleagues, Scott engaged in a tense back-and-forth with McConnell where they criticized each other.

“Sen. Scott disagrees with the approach that Mitch has taken in this election and for the last couple of years, and he made that clear and Sen. McConnell criticized Sen. Scott’s management of the NRSC,” Sen. Josh Hawley of Missouri told reporters about the exchange.

Meanwhile, Sen. John Cornyn of Texas said he was eager to get past the divisions with his Republican colleagues after emerging from the closed door meeting on Tuesday and hold the leadership elections.

He said he believed Republicans’ focus should be on helping Georgia Senate nominee Herschel Walker in his December 6 runoff against Democratic Sen. Raphael Warnock.

“I think the best thing we can do is get this behind us,” Cornyn told CNN. “Because you guys will keep writing about it for the next three weeks and it will distract from the Georgia runoff, which I think should be our undivided focus.”

This story has been updated with additional developments.