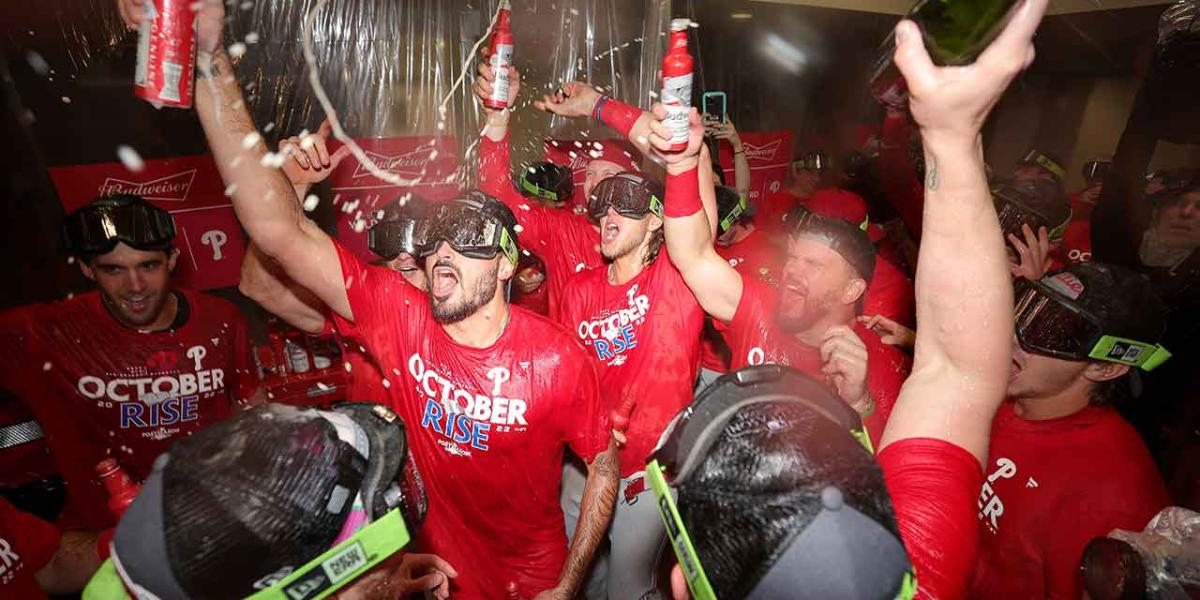 ST. LOUIS — Back on opening day, before the first pitch was thrown, Bryce Harper addressed a sellout crowd at Citizens Bank Park.

After 10 seasons of no playoffs, fans were starved for a winner.

Harper threw them some red meat.

“Let’s go have a party on Broad Street,” he told the crowd.

It takes a few little parties before you can have the big one and on Saturday night, the Phillies had their second little party in a week.

Five days after clinching their first playoff berth since 2011 and spraying champagne in Houston, the Phillies popped corks again as they advanced to the second round of the playoffs with a 2-0 win over the St. Louis Cardinals in Game 2 of the National League wild-card series in front of a huge crowd of 48,515 at Busch Stadium.

The Phillies won the best-of-three series in two games. They will move on to the NL Division Series and a date with a familiar foe, the NL East Champion Atlanta Braves. Game 1 of that best-of-five series begins Tuesday night in Atlanta. It will be the Phillies’ fourth trip to Atlanta this season. They went 8-11 against the Braves. The two teams do have some postseason history. The Phillies beat the Braves in the 1993 NL Championship Series.

Lefty Ranger Suarez will be ready to go in Game 1 for the Phillies, who have so far received outstanding starting pitching this postseason.

Zack Wheeler pitched 6⅓ shutout innings in the Phils’ 6-3 win over the Cardinals in Game 1 on Friday afternoon.

Aaron Nola followed Wheeler with 6⅔ scoreless innings in Saturday night’s series clincher. The right-hander scattered four hits, walked one and struck out six. Five of his strikeouts came with runners on base. He got two of them with a runner on second base in the first inning and two more with a runner on first in the sixth. Those strikeouts in the sixth came against the Cardinals’ two most dangerous hitters, Paul Goldschmidt and Nolan Arenado.

Nola exited with a runner on first base in the seventh. Jose Alvarado came on and ended the inning then gave up a walk with one out in the eighth. With the game on the line, manager Rob Thomson went to right-hander Seranthony Dominguez as menacing Albert Pujols strode to the plate. Dominguez gave up a single to Pujols to bring the potential go-ahead run to the plate then registered the two biggest outs of his career on strikeouts of Goldschmidt and Arenado.

Zach Eflin got the final three outs to save Nola’s win. Eflin allowed a pair of two-out hits before retiring Tommy Edman, the potential winning run, to end the game.

What a week it was for Nola. The longest-tenured Phillie retired the first 20 batters he faced in Monday night’s playoff clincher, a 3-0 win in Houston, then came back five days later and delivered the goods in the first postseason start of his career. Over his last two starts, both of huge importance to the team, Nola has pitched 13⅓ scoreless innings.

Monday night in Houston, Nola was backed by three solo homers — two by Kyle Schwarber and one by Bryson Stott.

In Saturday night’s series clincher, Nola got an early run thanks to a solo homer by Harper against Miles Mikolas in the second inning. The right-hander Mikolas hung a first-pitch breaking ball and Harper picked it up immediately, stayed on his legs and unleashed a smooth and powerful swing, sending the ball into the right-field seats. The homer was Harper’s first since September 24 and just his fourth in 36 games since coming off the injured list August 26.

The Phillies added a second run in the fifth inning when Alec Bohm doubled against Mikolas, moved up on a bunt by Brandon Marsh and scored on a sacrifice fly by Schwarber.

While the Phillies danced in triumph on the Busch Stadium lawn, two great Cardinals walked off the field for the last time — in defeat. The slugger Pujols and catcher Yadier Molina, both future Hall of Famers, played their games. Both had previously said this would be their last season.

Pujols and Molina were both part of the 2011 Cardinals team that went on to win the World Series after stunning a 102-win Phillies team in the Division Series. The Phillies were eliminated in a painful 1-0 loss in Game 5 at Citizens Bank Park. That was the night Roy Halladay left it all on the mound and Ryan Howard crumpled to the ground with a ruptured Achilles tendon, never to be the same.

All these years later, a Cardinals season has ended, and a Phillies’ season goes on.