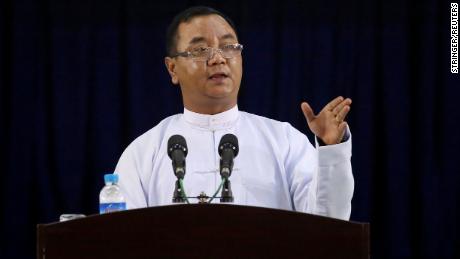 Their deaths mark the first judicial executions in the country in decades, and human rights groups fear more will follow. According to Human Rights Watch, 114 people have been sentenced to death in Myanmar since the military seized power in a coup in February 2021.

Ko Jimmy and Phyo Zayar Thaw were accused by the military of being “involved in terrorist acts such as explosion attacks, killing of civilians as informants,” junta spokesperson Zaw Min Tun previously told CNN. They were sentenced to death in January 2022, and last month Zaw Min Tun confirmed their appeals had been denied.

Civilian cases have been tried in military courts with proceedings closed to the public since the military seized power last year, ousting the elected government and reversing almost a decade of tentative democratic reforms.

Rights groups say these secretive military tribunals deny the chance to a fair trial and are designed for speedy — and almost certain — convictions, regardless of evidence.

United Nations Special Rapporteur on the situation of human rights in Myanmar, Tom Andrews, said in a statement Monday he was “outraged and devastated” by the executions.

“My heart goes out to their families, friends and loved ones and indeed all the people of Myanmar who are victims of the junta’s escalating atrocities,” he said. “These individuals were tried, convicted, and sentenced by a military tribunal without the right of appeal and reportedly without legal counsel, in violation of international human rights law.”

“This horrific news was compounded by the junta’s failure to notify the men’s families, who learned about the executions through the junta’s media reports,” Pearson said in a statement Monday.

A spokesperson for United Nations Secretary-General António Guterres said earlier the UN was “deeply troubled” by the decision to execute the men, calling it a “blatant violation of the right to life, liberty and security of person,” referring to an article in the Universal Declaration of Human Rights.

Amnesty International said it has recorded an “alarming” increase in the number of death sentences in the country since the takeover that it said were designed to “sow fear.”

“The death sentence has become one of many appalling ways the Myanmar military is attempting to sow fear among anyone who opposes its rule, and would add to the grave human rights violations, including lethal violence targeted at peaceful protesters and other civilians,” the organization said on Twitter in June.

An Amnesty report from 2021 said the last judicial execution in Myanmar known to have taken place was in 1988. There have been numerous death sentences in the country since, but they’ve usually been “commuted through mass pardons,” Amnesty said.

CNN has been unable to independently verify when the last execution by the state was carried out in Myanmar.

Phyo Zayar Thaw, 41, was formerly a lawmaker in Myanmar’s lower house of parliament for the then-ruling National League for Democracy — the party of ousted state counselor Aung San Suu Kyi.

Before becoming a politician, Phyo Zayar Thaw was a popular hip hop artist and a founding member of pro-democracy youth organization Generation Wave. He was imprisoned in 2008 by the previous military regime for his activism.

In November 2021, Phyo Zayar Thaw was arrested during a raid on an apartment complex in Myanmar’s biggest city, Yangon. He was accused of planning attacks on junta targets and charged under the Counterterrorism Law and the Public Property Protection Act, according to local media.

Ko Jimmy became a prominent student activist in Myanmar during the mass popular uprising against the then-military regime in 1988. He spent about 15 years behind bars for his activism and involvement in the 8888 demonstrations and 2007 Saffron Revolution.

According to local media, Ko Jimmy was detained in October 2021, accused of organizing guerrilla attacks on junta targets and charged with treason and terrorism offenses. He was also wanted by the regime for allegedly inciting unrest because of social media posts criticizing the coup.

Since seizing power, the military junta led by Min Aung Hlaing has embarked on a bloody crackdown against any opposition to its rule. Nearly 15,000 people have been arrested and more than 2,000 killed by military forces in that time, according to the Assistance Association for Political Prisoners.
The military has been accused of crimes against humanity and war crimes by the US, UN and other international bodies as it attempts to assert control over the people, who continue to wage a mass resistance campaign.

“European Union member states, the United States, and other governments should show the junta that there will be a reckoning for its crimes.”