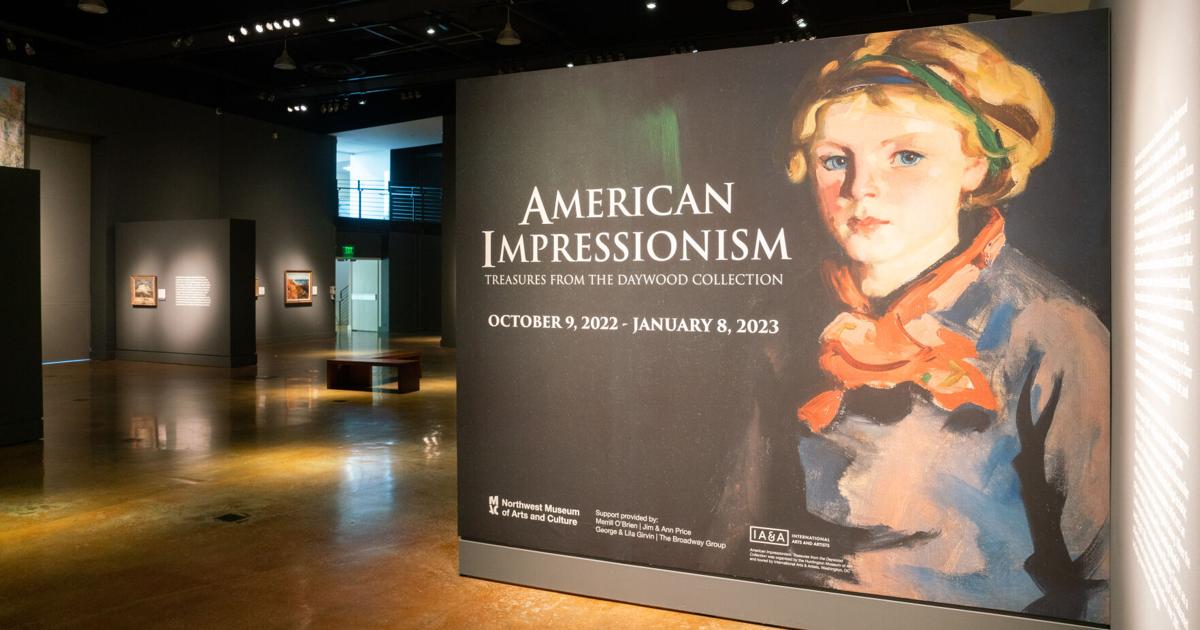 A new exhibition, “American Impressionism: Treasures from the Daywood collection”, has opened in Spokane’s Northwest Museum of Arts and Culture (MAC). The exhibit showcases 41 pieces of impressionist and post-impressionist American art.

Running from Oct. 9, 2022, to Jan. 8, 2023, the show contains works dating from the mid-19th to the mid-20th century. It features a wide range of subjects, from pastoral landscapes and dramatic seascapes to striking portraits and natural winter scenes.

A variety of American artists who highlight the impressionist movement like John Sloan, Charles Hawthorne, Robert Henri and John Twachtman appear in the exhibit.

According to Kayla Tackett, the director of exhibitions and collections at the MAC, the exhibition was originally planned to be put on in 2020. However, those plans were put on hold due to the COVID-19 pandemic and as a result the exhibit was rescheduled to open this year.

The collection comes from the Huntington Museum of Art in West Virginia and the art’s origins trace back to art patrons Arthur Dayton and Ruth Woods Dayton.

“Together they collected over 200 artworks in their collection and then they amassed even more,” Tackett said. “When Arthur died, Ruth decided to kind of create a museum out of their collections. So, she housed the collection in a building nearby near their home and called it the Daywood gallery.”

The collection was eventually donated to the Huntington Museum of Art in the 60s. Visitors of the exhibit can expect to see many of the key identifying features of impressionist art as well as the influence European art had on American artists.

“You’ll see in the paintings a lot of the broader brushstrokes, and the playing with light and the color that the European impressionists were doing,” Tackett said. “Americans often would go to Europe and study these techniques and then they brought them back to America and applied the same techniques to American landscapes and American subject matters.”

Paul Manoguerra, director and curator of the Jundt Art Museum at Gonzaga University, also highlighted the influence of European artists. Notably, the French impressionist aesthetic of artists like Claude Monet had a significant influence on American impressionists.

“For French impressionism in particular it’s painting out of doors start to finish, loose brushstrokes, relatively rich and frothy impasto, so layers of pigment on the surface of the canvas, an interest in the effects of time of day, light, season, whatever you’re painting but then also beyond the landscape, an interest in everyday life,” Manoguerra said.

One painting in the collection that particularly stood out to Manoguerra was John Twachtman’s winter scene of his Connecticut farm.

“That was a particularly strong painting in my opinion and a great example of exactly the kind of influence of French impressionist aesthetic on
an American who then applied it specifically to an American landscape,” Manoguerra said. “And in Twachtman’s case, it’s the profound influence of Monet and Monet, in particular, working at Giverny in his own.”

Manoguerra said Monet painted subjects and landscapes on his property in Giverny, France, including his famed series of water lily paintings. Twachtman also utilized his own property in Connecticut to find artistic inspiration.

While aesthetic American landscapes of all kinds make up a large portion of the exhibition there are also a variety of portraits that Tackett feels are both beautiful and engaging.

“There’s always something about a portrait looking out at you that is kind of special in its own way,” Tackett said.

GU students planning to access the exhibit can expect to pay $10 with a valid student ID. They will also be able to visit the other exhibitions being put on by the museum, including a new retrospective featuring local artist Lila Shaw Girvin.

For Tackett, the exhibition represents a great opportunity for art lovers and for those looking to see the techniques of impressionism.

“It’s a good show for people who really love art or who maybe are familiar with names like Monet and Renoir and things like that,” Tackett said. “You’ll see elements that seem familiar, like I said, that light and color and that technique, you’ll see a lot of that here too.”

See the MAC’s website for further information regarding tickets, exhibits and events.

Connor Campbell is a copy editor.