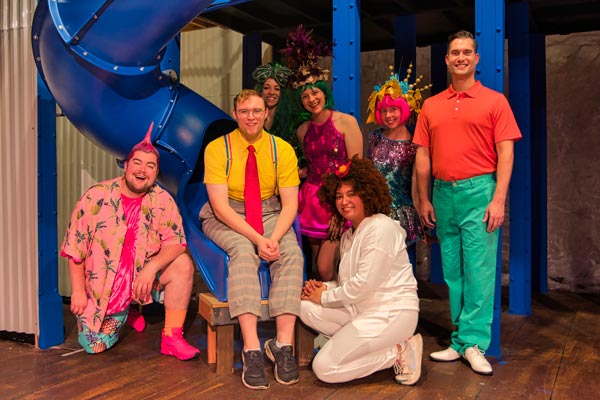 (SPRING LAKE, NJ) — Spring Lake Theatre presents The SpongeBob Musical across three weekends in October. When Bikini Bottom, the home of SpongeBob Squarepants and his friends, is threatened by the impending eruption of a volcano, SpongeBob springs into action to save the town he loves. Despite the repeated protests of the citizens of Bikini Bottom telling him he is nothing more than “a simple sponge”, SpongeBob knows he has the potential to be the hero his town needs.

On July 17, 1999, the cartoon comedy show SpongeBob Squarepants premiered on Nickelodeon. It was created by marine science educator and animator Stephen Hillenburg, based on an unpublished educational comic book he had created to educate his students on undersea life. After almost two decades of success on television, the cartoon was adapted into a musical which premiered on Broadway on December 4, 2017. It opened to rave reviews and was nominated for 12 Tony Awards.

On October 14, 2022, The SpongeBob Musical opens at Spring Lake Theater! It is a delightful musical featuring music by such prominent artists as Cyndi Lauper, David Bowie, Sara Bareilles, Plain White T’s, T.I., Panic! at the Disco, The Flaming Lips, Steven Tyler, Lady Antebellum, John Legend, and They Might Be Giants. The musical is a treat for children and adults alike.

Director Reid Henderson calls it,“One of the most joyous things I have ever seen. It is a visual and musical delight, and spreads a message about the power of positivity and unrelenting kindness in the face of adversity. It is a celebration of everything that makes us all unique and important. It also features some of the most entertaining music and dance numbers I can think of.”

Advertise with New Jersey Stage for $50-$100 per month, click here for info

The show is produced by Patricia Barry, with Musical Direction by Teddy Kernizan; Choreography by Christine Baglivio;  Set and Lighting Design is by Andrew Dagostino.

Taking on the title role is Willie Naess. Willie is no stranger to the Spring Lake Theatre stage having appeared in Grease and Seussical. The cast also features many Spring Lake Theatre veterans, such as Tyler Cicardo as Patrick, Nick D’Ambrosia as Plankton, Michael Morch as Squidward, Ian Kearns as Mr. Krabs, Rebecca Madeira as Karen the Computer, Nicolas Hewgley as Perch Perkins, and Bridget Hughes as Pearl Krabs. They are joined by newcomer Aisa Feratovic as Sandy, and many more talented local actors!

Advertise with New Jersey Stage for $50-$100 per month, click here for info