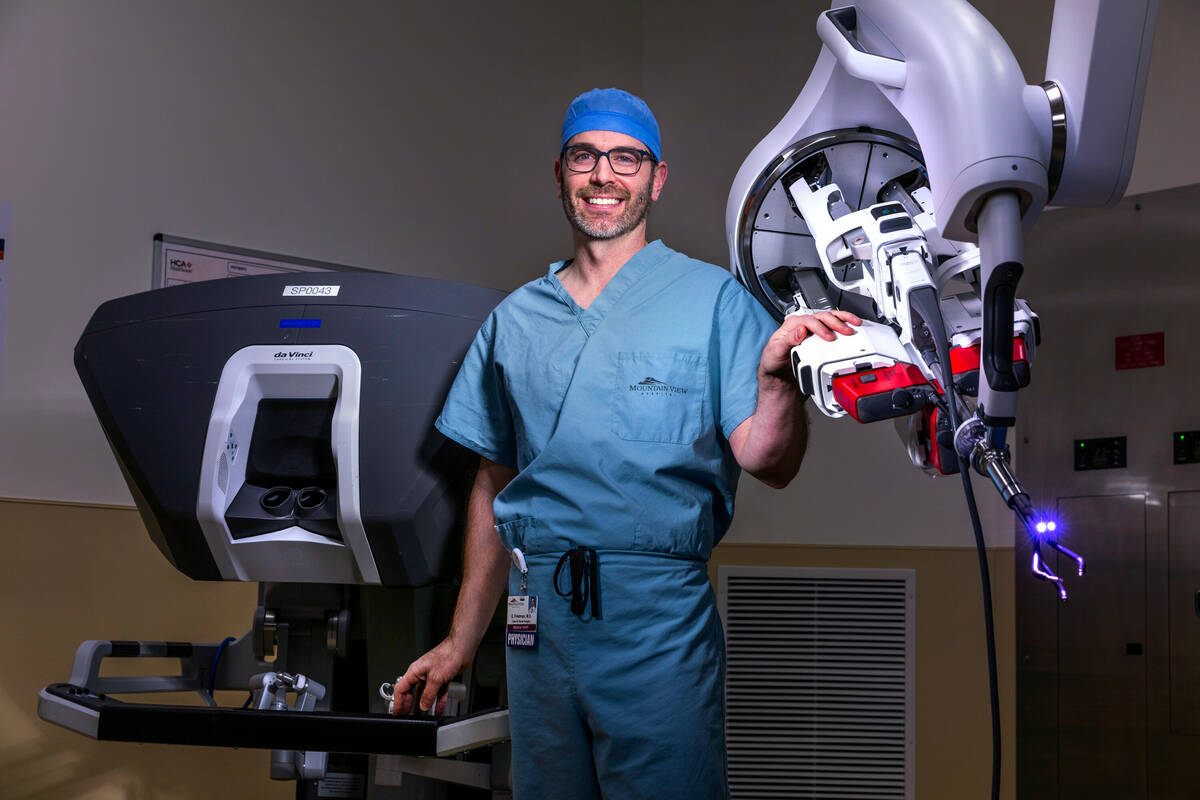 The surgeon sits at a computer console that looks a little like Pixar’s WALL-E.

After placing his thumbs and index fingers in grips, he makes small motions to cut or cauterize or stitch, while watching the console’s screen providing a magnified, three-dimensional view of the surgery site. He pushes pedals with his feet, like an organist, to switch back and forth between instruments.

Surgeon Garrett Friedman’s movements are conveyed to a robot a few feet away, which typically would be an octopus-like piece of machinery with four arms. This afternoon, however, the robot in the operating room at MountainView Hospital has a single mechanical arm with four small prongs, three with pincer-like tips and a fourth with a miniature camera.

This next-generation robotic surgical system requires one small incision for colon operations rather than the multiple incisions of earlier robotic systems, or the groin-to-ribs cut of traditional hands-on surgery.

“It really distills the operation down to the absolute bare minimum that a patient needs to go through in 2022 to have a minimally invasive colon operation,” Friedman said Tuesday while demonstrating the system.

Friedman and HCA’s MountainView Hospital have joined a Food and Drug Administration clinical trial to confirm the safety and feasibility of using the da Vinci SP (single port) robotic system in a variety of colorectal surgeries. The trial is enrolling adult patients who are candidates for minimally invasive surgery for colon cancer, polyps and other conditions.

Friedman is one of a handful of surgeons in the U.S. performing colorectal surgeries using the system. MountainView is the only facility in Nevada with the system.

The system was initially validated by the FDA for use in urology and for surgeries of the mouth, such as tongue cancer, Friedman said. He has used the system fewer than 10 times for single-incision surgeries and 30 to 40 times for other colon operations. The FDA gives wide latitude to doctors to use devices in ways beyond their original approvals.

“We’ve already been able to execute these operations safely before, so we have a high degree of confidence that it is safe to do,” he said.

The performance of the technology in the trial will be assessed by whether a procedure can be completed without the need to convert to another approach, such as multiport robotic or laparoscopic surgery, according to a description of the study.

Other participants in the trial include the Adventist Health System/Sunbelt in Orlando, Florida, Mayo Clinic in Rochester, New York, and Houston Methodist Research Institute.

Robotic surgery is credited with allowing doctors to perform certain complex procedures with greater precision and control. The one-port system, by reducing the number of incisions to one, can reduce pain and scarring, Friedman said.

“All of us want the least invasive (approach), the least amount of pain, the fewest number of complications, and we think this is a pathway to that, using this highly specialized technology,” he said. There is a cosmetic benefit, in that the single incision can be hidden below the bikini line.

There is no additional — or reduced — cost for patients to participate in the clinical trial, which according to the study’s descripton requires follow-up exams at 14 and 42 days after the operations, and more follow-ups annually for five years.

As a surgeon in the U.S. Air Force, he came to Las Vegas in 2017 to work at Nellis Air Force Base. “I never really planned to live in Las Vegas, but ultimately, I fell in love with it,” he said.