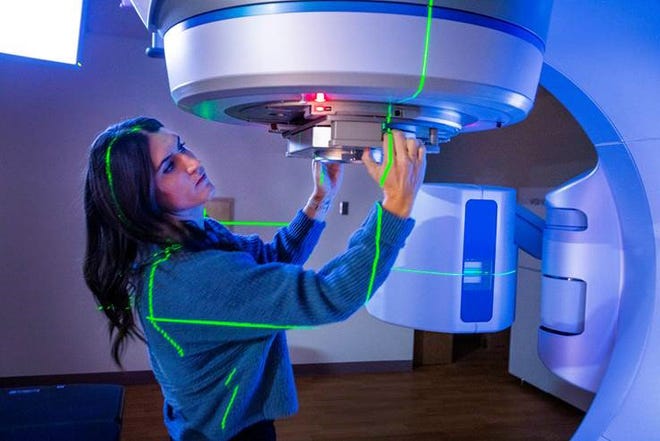 FARMINGTON — San Juan Regional Medical Center has expanded its services and its technology arsenal with a reopened cancer center equipped with advanced treatment capabilities and the addition of a robotic surgery system.

Administrators say the cancer center now offers a level of service previously unavailable in the region, and the surgical system can help general surgery and urology patients heal faster as it is less invasive than what happens in standard surgeries.

The San Juan Regional Cancer Center reopened “with new advanced technology to treat even the smallest of cancers that we were previously unable to treat here at home,” the hospital said in a recent news release.

“The $5 million investment includes a CT scanner and linear accelerator that work in tandem,” spokesperson Laura Werbner said in the news release.

The CT scanner pinpoints the exact location of a tumor “and then sends that information to the linear accelerator, a radiation therapy machine, for precise treatment,” the news release said.

“We have not had that kind of technology before. So, we are going to be able to treat the very smallest of tumors that could live on a nerve,” said San Juan Regional Cancer Center Director Troy Fuhrman. “It’s amazing treatment. Very precise. Before we would have to send some of our patients to Mayo for treatment. Technology has come such a long way that now we are going to have this in San Juan County.”

Fuhrman told the Daily Times he and the hospital staff are humbled by the level of support San Juan County has given  the cancer center and thankful to be able to offer advanced cancer treatment in the Four Corners region.

Fuhrman said construction on the center’s reboot began in earnest around Memorial Day weekend and the center is now in the soft opening phase and welcoming patients.

A new oncologist is expected to join the staff around December.

The staff includes three therapists and Medical Physicist Chelsea Page-Robertson of Colorado Associates In Medical Physics, who he said “is our safety barrier,” maintaining the treatment system and approving treatment plans to make sure the right areas of the body are receiving treatment.

“The fatigue that comes from chemo and radiation is astronomical. So, to cut that down from eight to 10 weeks to just two, how exciting is that?” Registered Nurse and Cancer Navigator Deb Albin, said. “We are going to be able to do so much more, cut down treatment time, it’s so beneficial to our patients.”

The release stated that the new equipment uses lasers and 4D imaging “to specifically and accurately target and image the area to be treated. The simulator also includes a respiratory gating system that can detect and monitor breathing, so even if a tumor moves while someone is breathing, the radiation therapy knows to adjust accordingly.”

SJRMC is among the first hospitals in the western U.S. region to utilize the new technology, the release stated.

The linear accelerator is called the Varian Edge Radiosurgery System and provides stereotactic radiation therapy. “This is a “cyber knife” that can precisely deliver treatment to the very smallest of tumors from multiple different angles at the same time,” the release stated.

SJRMC has followed an industry trend in purchasing a robotic surgery system to give doctors, who are still in charge of performing the surgery, increased magnification as the machine translates their hand movements into precise actions.

The use of the device results in a less-invasive surgery than older techniques, the medical center stated.

“There are so many advantages to undergoing a robotically-assisted procedure as a patient,” said Surgeon Dr. Damon Kalcich, who is also the hospital’s Department of Surgery chairman. “Some surgeries that were previously performed as open procedures can now be done as minimally invasive. Smaller incisions mean less blood loss, less pain, less scarring, quicker recovery and leaving the hospital sooner.”

“We are truly thrilled to be bringing this cutting-edge technology to patients in the Four Corners. Having surgeons that embrace this advanced technology is extremely beneficial to our patients, and we look forward to expanding our minimally invasive surgical options with the capabilities the Xi System brings,” said CFO and Acting Administrator John Mayer.