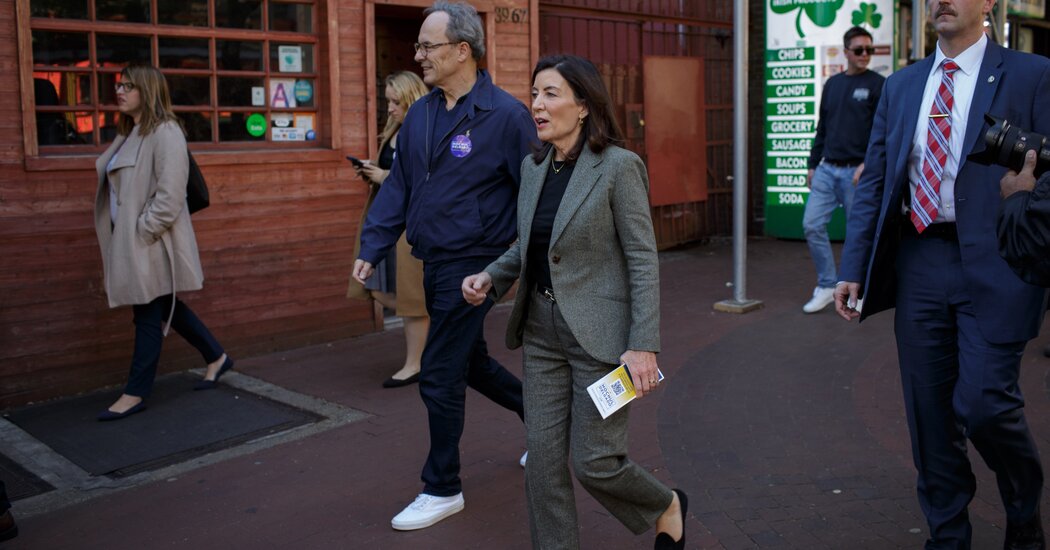 Less than a week after New York Democrats suffered the loss of four congressional seats that could cost them control of the House, a call for new leadership in the state party is growing.

“The writing is on the wall and has been for some time: Jay Jacobs is not fit to serve as chair of the State Democratic Party,” the statement says, urging Ms. Hochul to “work with the party to elect a focused, determined, unifying party leader.”

Mr. Jacobs said on Sunday that he had no intention of resigning. “I am proud of the work we all did to bring out our vote. Like many others, I am disappointed by losses in several of our congressional races,” he said. “My focus now is on beginning the work to win those seats back in two years.”

Mr. Jacobs has repeatedly sparred with the left flank of his party, blaming it for Republicans’ successes in New York. In turn, progressives have condemned his choices — such as floating a third party line, failing to invest in ballot measures that would have changed the redistricting process and refusing to endorse the winner of the Buffalo mayoral primary, India Walton, a democratic socialist.

Understand the Outcomes of the 2022 Midterm Elections

That refusal — and a gaffe in which Mr. Jacobs invoked the Ku Klux Klan leader David Duke in describing why he had not endorsed Ms. Walton — led to calls for Mr. Jacobs’s resignation. Those calls have been revived by progressives including Representative Alexandria Ocasio-Cortez in the wake of Democrats’ poor showing in New York last week.

No members of New York’s congressional delegation have yet signed the statement, including Ms. Ocasio-Cortez. But she shared an earlier version of this piece with a message of support on Twitter: “If we’re going to thrive after this election, we need to clean things up from the very top and activate communities across the state,” she said.

And Representative Mondaire Jones — who lost his bid for re-election after the state’s redistricting mess led him to run for a New York City seat instead of his current seat in the northern New York City suburbs — also expressed his support for a change in leadership on Twitter. He said that for Ms. Hochul to replace Mr. Jacobs “would not be a profile in courage. It would be the bare minimum a leader should do.”

Where other states held off Republican incursions and even gained ground, Democrats in New York lost four competitive House seats, two of them on Long Island, where Mr. Jacobs is chair of the Nassau County party. And while Ms. Hochul was elected governor, she won by one of the tightest margins in recent decades.

Ms. Krueger, who chairs the powerful Senate Finance Committee, blamed some of Democrats’ losses on a party so focused on defending incursions from the left that it took large portions of its base for granted. She said that she had privately pushed to have Mr. Jacobs replaced before the election, without success.

The Democratic Party in New York needs to be completely rebuilt and reformed, she said, adding: “Nobody can actually seriously say, here’s what the party is, does, and how it is helpful. And that’s pretty disturbing.”

Thus far many progressive politicians and organizations support the effort to get rid of Mr. Jacobs, but fewer legislative veterans do. Whether organizers can build a broad base of support will be a key measure of the level of discontent across the party.

There are indications that Mr. Jacobs’s performance was received more positively by some centrist Democrats, including the New York City mayor, Eric Adams, who credited Mr. Jacobs with Democrats’ victories in statewide races, calling him a “steady hand” in a tough cycle.

Mr. Adams has sought to use the Democrats’ losses to further his own line of messaging, seeing a turn to Republicans in the suburbs as proof that progressives have led the party too far to the left.

Appointed by former Gov. Andrew M. Cuomo, Mr. Jacobs has been a steadfast Hochul supporter, personally endorsing the governor even before she had won the Democratic primary.

Ms. Hochul, for her part, has given little indication that she is open to a shake-up. When asked by reporters about Mr. Jacobs last Thursday, the governor had only good things to say.

“I think he did a great job as chair,” she answered, adding: “We’re not changing anything.”