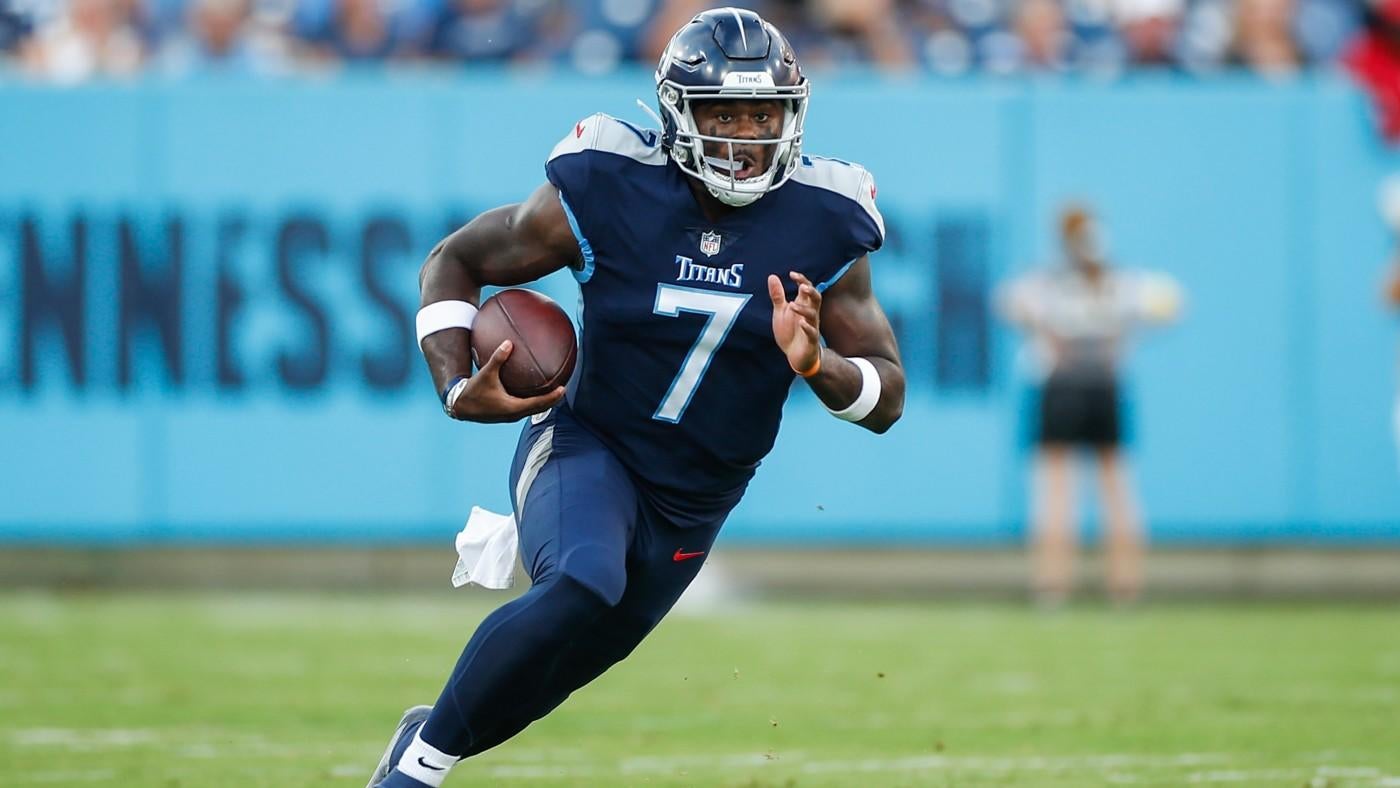 The NFL preseason has reached the midway point with Week 2, which serves as the de facto “dress rehearsal” for starters to prepare for the beginning of the regular season — which is just three weeks away. For teams that don’t have joint practices this week, Week 2 of the preseason is critical.

The Saturday slate features eight games, with three in the afternoon, four taking place simultaneously in prime time, and the Cowboys and Chargers squaring off in the late window. The Broncos won’t play most of their starters in one of the two early games, but the Bills are set to give theirs — including Josh Allen — at least a little bit of run. Andy Reid indicated that the Chiefs’ starters will play the first half of their game against the Commanders, so we’ll get to see Patrick Mahomes and the new-look offense take the field again.

We’re likely to see at least some of Trey Lance against the Vikings later in the day, but San Francisco’s starters are not expected to see that much action. Tom Brady remains absent from Buccaneers camp, so he won’t appear in the game against the Titans, but we should get another look at Malik Willis. Dallas and Los Angeles are two of the teams most aggressive about resting starters during preseason, so we should expect that game to be a battle of down-roster players fighting for spots on the team or in the rotation.

Below, we unveil all the must-see highlights from Friday’s action, the appetizer for the main course of games this weekend.

The Kenny Pickett hype train continues to chug along. After tossing the game-winning touchdown in Pittsburgh’s preseason opener last week, the first-round rookie is turning heads yet again. This time, Pickett is seeing work with the first-team offense and looks like a guy capable of being the Week 1 starter. In the second quarter, he led a touchdown drive in just 42 seconds.

On top of the scoring toss to running back Benny Snell Jr., Pickett also showed nice touch on a 24-yard gain to tight end Pat Freiermuth. In the first half, Pickett went 6-of-7 passing for 76 yards and that touchdown.

Malik Willis is flashing his upside. The rookie out of Liberty got the start in Tennessee’s preseason matchup against Tampa Bay, and his ability to weave around the pocket has been on full display. While leading the Titans on a field goal drive in the second quarter, Willis threw a side arm pass as he escaped a would-be sack to move the chains.

He then ripped off a 25-yard scramble to get Tennessee into the red zone, where they’d eventually kick a field goal. Willis is still a raw prospect and needs to improve as a passer, but the tools are there for him to be a legit candidate to be a long-term option for the Titans with some development.

Titans rookie wideout Kyle Phillips has made a name for himself this summer. He’s drawn praise from head coach Mike Vrabel, who also noted that quarterback Ryan Tannehill trusts throwing to him. While he’s opened eyes as a pass catcher, the fifth-round pick out of UCLA is also making plays in the return game.

In Tennessee’s exhibition with the Bucs on Saturday, Phillips fielded a punt just outside the Tennessee 20-yard line and returned in 35 yards. He was able to make his initial tackler miss, found a hole and fought through a couple of tackles to flip the field for the Titans.

While rookie George Pickens has garnered a ton of attention in Pittsburgh this summer, don’t sleep on Chase Claypool’s talent. On the Steelers opening drive in their exhibition with the Jaguars, Mitchell Trubisky took a third-and-6 snap and connected with Claypool, who ran a fade out of the slot and rose up to make a contested catch for 29-yards. Claypool is looking to build off a 2021 season where he logged a career-high 956 yards from scrimmage and 13.1 yards per touch.

In case you were wondering, Patrick Mahomes looks like Patrick Mahomes. In Kansas City’s second preseason game of the summer against Washington, the former league MVP got the start and looked like he was in midseason form. He opened the game with back-to-back touchdown drives, both culminating with a pass to tight end Jody Fortson.

The first catch capped off an 87-yard drive for the Chiefs. Mahomes threw it up to Fortson and he was able to display strong footwork to remain in bounds for the score. That wasn’t even Mahomes’ best throw on the drive as he completed a 39-yard pass to Justin Watson as well.

Later, Mahomes was flushed out of the pocket and forced to make an off-balance throw to the front left corner of the end zone where he’d find Fortson again.

Through two drives, Mahomes is 12 of 19 passing for 162 yards and those two scores.

Lions and touchdowns and grabs, oh my

Not many starters saw the field in the Lions vs. Colts game, but that doesn’t mean there wasn’t anything worth paying attention to. Lions wideout Tom Kennedy found himself in the end zone on back-to-back Detroit possessions. The first touchdown grab came on the final play of the first half:

To open the scoring after halftime, Kennedy once again reached up over a Colts defender to haul in a pass for six points.

Josh Allen and the first-team Buffalo Bills offense marched right down the field against the Denver Broncos, covering 70 yards on six plays. The drive ended with Allen scrambling around the pocket, setting his feet, and whipping the ball to Gabriel Davis in the front of the end zone.

Allen went 3-for-3 for 49 yards and a score, completing passes to Davis, Stefon Diggs, and Isaiah McKenzie. Devin Singletary was the lead back for Buffalo, with Zack Moss entering for drive No. 2 ahead of rookie James Cook. Oh, and Buffalo followed up the Davis touchdown catch by reaching the end zone on each of its next five possessions. Moss ran in a pair of short scores, O.J. Howard caught a touchdown from Case Keenum (who finished 16 of 18 for 192 yards), and Duke Johnson hit pay dirt twice on the ground as well.

Catch of the (Friday) night!

The Houston Texans played their starters for the first half of this preseason contest against the Los Angeles Rams, and were able to take a 7-6 halftime lead thanks to this pinpoint catch by Nico Collins in the end zone. Collins just upstaged Derion Kendrick for the ball and came away with the score.

Collins is going to play a role in the Texans offense in 2022. Plays like this will get him more targets.

What makes this Etling touchdown run special? The play occurred during an interview with Aaron Rodgers on the Packers broadcast. Rodgers’ excitement with Etling scoring makes this play even more thrilling.

Love looked the part of a NFL quarterback on Friday night, finishing with 113 yards and a touchdown pass. He also showcased his running ability with this 11-yard run for a first down.

Olave is giving Saints fans a preview of what’s to come when he lines up alongside Michael Thomas and Jarvis Landry this fall. The first-round pick connected with Ian Book on a 20-yard touchdown with 12 seconds left in the first half — his first in a Saints uniform.

Olave had just one catch for four yards last week, but had two in the first half of this one.

Patriots quarterback Bailey Zappe made a dangerous throw rolling to his left, and Hayes read the pass to take the ball the other way and tie the game. Zappe hasn’t been as sharp in his second outing this preseason, one in which Matt Patricia is calling plays.

There’s a spot for Doubs to earn snaps with the first team this year, and this touchdown catch from Jordan Love demonstrates why. Doubs came up with this impressive four-yard touchdown reception over Brian Allen to put the Packers up, 10-3, over the Saints in the second quarter. Love is starting to show trust in the fourth-round rookie.

Lutz missed all of 2021 with a core muscle injury, as the Saints missed his reliability in the kicking department. He certainly looked like his old self with this 59-yard field goal to close out the first quarter.

Just 13 of 23 on 50-plus yard field goals in his career, Lutz hitting this kick is very encouraging.

Romeo Doubs making his case to move up the depth chart

Doubs was one of the young wide receivers Packers quarterback Aaron Rodgers criticized during the week, so he was in the spotlight with the second teamers participating in the majority of this one. A 17-yard catch on the opening drive on a Jordan Love throw makes a strong impression, even if Doubs failed to corral a third-down pass earlier.

No longer a quarterback for the Saints, Hill has shifted his focus to tight end for the 2022 season. The No. 2 tight end in New Orleans, Hill made an early impact by catching a 10-yard pass from Ian Book. Hill adds an extra dimension to the Saints offense in his new role, and can still play wide receiver and running back in short-yardage situations.

The Patriots averaged just 1.9 yards per play in the first quarter with just 21 yards of offense, but Nelson Agholor changed that with this 45-yard catch on an impressive throw from Mac Jones. Going against a second-team defense or not, this is what Patriots fans want to see from their new-look offense.