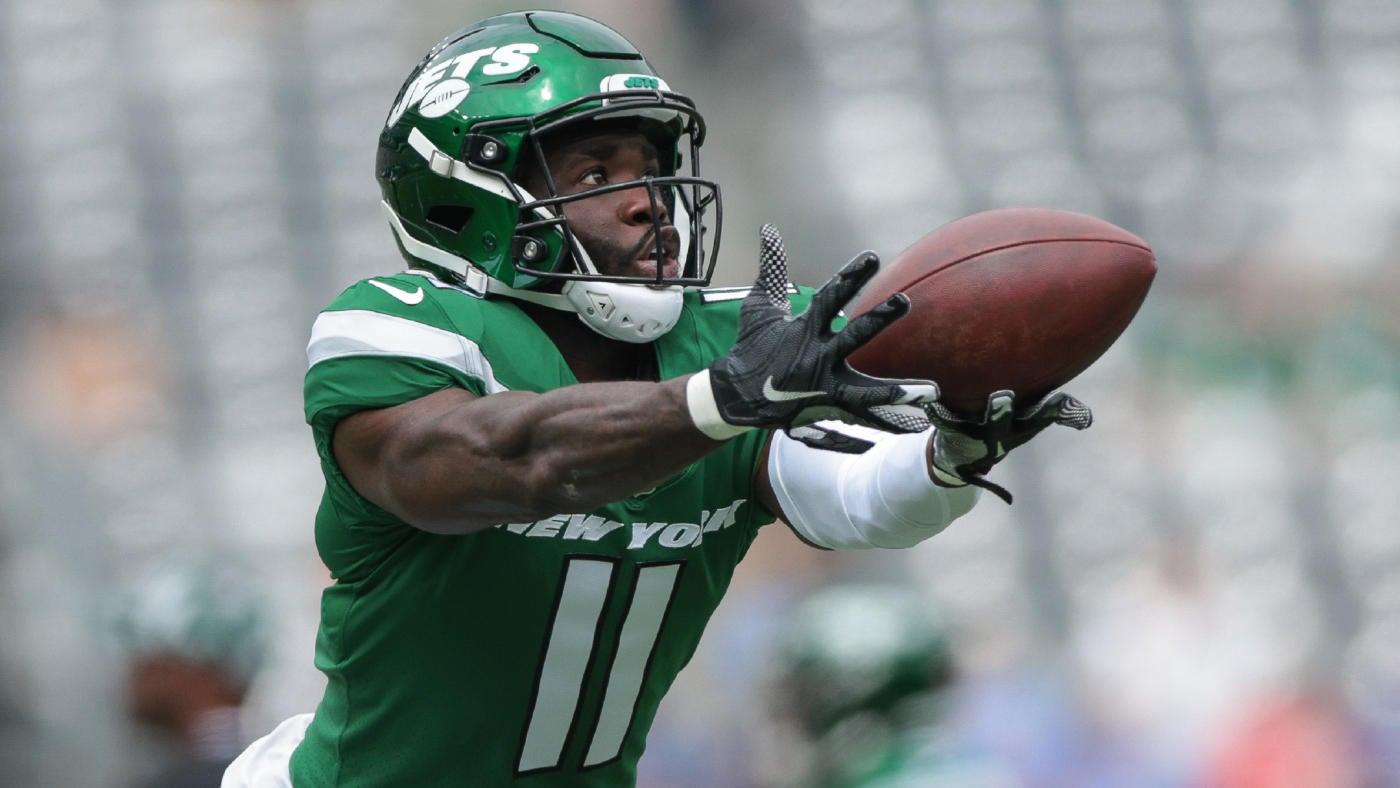 The NFL preseason is almost done, with only Sunday’s two games remaining before we blast off toward the season-opener on Sept. 8.

First up Sunday is the Battle of New York, as the Giants and Jets face off with the winner completing a 3-0 preseason. Then comes the final preseason game of 2022, featuring the Steelers and Lions. That one could carry some weight, with Pittsburgh planning to play all three quarterbacks — Mitchell Trubisky, rookie Kenny Pickett and Mason Rudolph, in that order — as it still hasn’t decided on a starter for the regular season.

Below, we will break down highlights from all 16 preseason games. Keep this post bookmarked, as it will be your one-stop shop for everything you need to see.

Both the Jets and Giants entered the Battle for New York at 2-0 in the preseason, and only one could exit with an unblemished exhibition mark. That team was the Jets after Chris Streveler (10-for-13 for 96 yards and two TDs) found Calvin Jackson Jr. in the end zone in the final minute for a victory.

It was a game that also saw Denzel Mims, who requested a trade from the Jets earlier in the week, make seven catches for 102 yards and a touchdown.

It’s not clear if Zach Wilson will be back from injury in time for the Jets’ regular-season opener, but Mike White is providing a reminder that the team has a pretty good backup. Lest anyone forget, White threw for 405 yards and three touchdowns in his first NFL start last season against the Bengals after Wilson went down. On Sunday, entering the fourth quarter White had thrown for two touchdowns while going 12-of-15 for 164 yards. Joe Flacco started the game as the Jets’ QB and went 7-of-12 for 76 yards with an interception and no TDs.

Tyrod Taylor started the Giants’ final preseason game against the Jets on Sunday with Daniel Jones resting, but Taylor didn’t remain in the game for long. Taylor took a monster hit from the Jets’ Michael Clemons in the first quarter. Taylor hung in and amazingly completed the pass … but perhaps the better play in a preseason game would’ve been to tuck the ball away and protect himself. Taylor stayed on the ground for several minutes. He did eventually jog off the field before being taken away on a cart. It was reported that Taylor hurt his back.

Brady was able to participate in one drive this preseason, finishing with 11 snaps before calling it a wrap prior to the regular season opener. After being away from the Buccaneers for 11 days during camp, Brady finished 6 of 8 for 44 yards on a 66-yard drive that ended in a 30-yard field goal by Ryan Succop.

Brady was able to find Julio Jones on a 20-yard completion and found Cameron Brate — who’s expected to be the No. 1 tight end — twice on the drive. The Buccaneers offense moved down the field on Brady’s lone series, enough reps to get the quarterback ready for Week 1.

The Bears second-year quarterback was sharp in the first half of Saturday night’s game against the Browns, going 14 of 16 for 156 yards and three touchdown passes. He also ran for 11 yards as the Bears took a 21-6 lead into halftime.

The Titans’ first-round pick didn’t make an impact through Tennessee’s first two preseason games, but Saturday night was different. Burks caught a pass on the first play of the game, and recorded another reception later in the first quarter. However, he then left the contest with a wrist injury, and was deemed questionable to return.

Burks did end up returning in the second quarter, and caught a 14-yard touchdown for his first NFL score.

Elijah Campbell should not have scored on this play, but he did. The defensive back took advantage of a bad throw from Reid Sinnett, and fought tooth and nail to take the pick back for a touchdown.

He was met by Sinnett and a flock of Eagles at the 10-yard line, but kept his feet moving and found himself in the end zone.

The Titans rookie quarterback is focusing on his pocket presence as he makes the jump to the NFL, but his legs make him special. Check out this play, where Willis ran right up the middle for a gain of 50 yards.

Not only is the Liberty product fast, but he’s clearly dangerous with the moves he can make in the open field. He has good vision, and knows when to cut back or go down.

The Ravens have a new wide receiver, and he may be somebody who makes an immediate impact on offense. Former Chiefs wideout Demarcus Robinson absolutely embarrassed Washington cornerback Danny Johnson on this route, and it resulted in a 67-yard touchdown.

This was also Anthony Brown’s first pass of the game. Are the Ravens a new quarterback factory?

Tua comes out on fire

How Tyreek Hill will fare in Miami’s offense compared to how he fared in Kansas City is a big storyline entering this season. There’s a narrative that quarterback Tua Tagovailoa doesn’t have the most powerful arm, but he and new head coach Mike McDaniel are trying to combat that notion.

On the first play of the Dolphins’ final preseason game, Tagovailoa found Hill streaking down the field for a gain of 51 yards.

It took the Dolphins just four plays to score the first touchdown of the game. Tagovailoa completed all three of his passing attempts for 72 yards, and he hit River Cracraft for an eight-yard score.

This is how you make a case for the 53-man roster. Quinton Bell proved he can be a force on special teams with this punt block touchdown, as the Falcons extended their lead before halftime.

While Ridder did throw an interception on the first play of the game Saturday, he rebounded to lead a 15-play, 75-yard touchdown drive on the Falcons’ next possession. On second-and-goal, Ridder found another rookie in running back Tyler Allgeier for the score.

The Falcons have the versatile Cordarrelle Patterson and Damien Williams at running back, but some are expecting Allgeier to play a role in his first NFL season.

Interception on the first play of the game!

Rookie quarterback Desmond Ridder got the start for Atlanta’s third and final preseason game Saturday, and unfortunately, he threw an interception on the first play of the game!

Check out this read from Jaguars safety Daniel Thomas:

The Cowboys were able to take their preseason finale over the Seahawks thanks to Ben DiNucci throwing the winning touchdown pass to Peyton Hendershot. The 14-yard pass gave the Cowboys a 27-26 lead with 4:07 left, as Dallas overcame 10 penalties to secure the victory.

DiNucci is a longshot to make the Cowboys, but he may end up somewhere in the NFL next week.

Brandon Smith gets a toe-tap TD catch for Cowboys

Brandon Smith is a longshot to make the Cowboys’ 53-man roster, yet is making an impression on the coaching staff with this highlight-reel touchdown catch. This 8-yard catch in the back of the end zone from Will Grier tied the game with the Seahawks in the third quarter.

Smith leads Dallas with three catches, making the most of his final opportunity.

Sam Darnold rushes for a TD, exits with ankle injury

Sam Darnold, now the No. 2 quarterback in Carolina, had his fair share of rushing scores for the Panthers last season. His 1-yard score put Carolina up 21-0 on Buffalo with 7:06 to play in the third quarter.

Darnold had a career-high five rushing touchdowns last season for the Panthers — or as many as he had his first three seasons in the league combined with the Jets.

It wasn’t all good news for Darnold, who was carted off the field after suffering an ankle injury and will not return.

The Drew Lock experience is in full effect. After throwing an interception on his first drive of the game, Lock earned another chance to showcase his arm strength. Battling for the starting quarterback job in Seattle, Lock hit Penny Hart on a 35-yard touchdown pass. Throws don’t get much better than this one in Week 3 of the preseason.

Lock has an opportunity to take the job from Geno Smith, who started this game for Seattle. Head coach Pete Carroll sais he’ll name a starter after the third preseason game.

Mark Ingram is the active leading rusher in the NFL and still has a prominent role with the Saints, rushing for two touchdowns in the first quarter as New Orleans jumped to a 14-0 lead over the Los Angeles Chargers — who are playing the majority of their backups.

This touchdown run was from 2 yards out.

Mayfield won the starting quarterback job in Carolina and is putting the exclamation point on this training camp with a 19-yard strike to Shi Smith for the touchdown. Smith has been mentioned as Mayfield’s favorite target by some of the local writers in Carolina, emerging as a contender for not just a roster spot — but snaps in regular-season games.

Mayfield has two touchdown passes in the first quarter. That may be it for him.

To the surprise of some, the Texans’ starting quarterback took the field for the beginning of the second half. After a pedestrian first two quarters in which he threw an interception, Mills led a six-play, 77-yard drive which ended with a touchdown — a 16-yard strike to Chris Moore.

This is a nice bullet pass in the middle of the field. Houston has high hopes for its second-year signal-caller.

Matt Bushman is having a big night, and he recorded 73 receiving yards on his first three catches. He scored his second touchdown of the game at the beginning of the third quarter on a play that looked like a turnover waiting to happen.

What appeared at first to be a great Texans touchdown catch turned into a 49ers interception in the blink of an eye. Credit to both defensive backs on this play for fighting for the ball. Samuel Womack III knocked it loose, and then Tarvarius Moore somehow hauled it in.

Whose man was that?!

Chiefs tight end Matt Bushman ran a simple corner route, and it resulted in a 54-yard touchdown. The safety wasn’t looking in his direction, and the cornerback thought he was handing off the tight end to his teammate. This play is going to look ugly when the Chiefs review the film.

The Packers got off to a slow start on Thursday night — going three-and-out on their first two possessions. Things began to click on their third drive, however, as Green Bay went 83 yards down the field on 11 plays to score the first touchdown of the game.

It was the undrafted rookie out of Iowa who got into the end zone for the Packers. Check out this EXPLOSIVE run by Tyler Goodson, capped by the spin move.

Houston’s rookie running back has been one of the stars of the preseason. After an impressive Week 1 outing, Pierce didn’t play last weekend. Texans head coach Lovie Smith said he held Pierce out because they saw a lot of him in the first preseason game, per Pro Football Network, which may mean he’s RB1.

Pierce played Thursday night, however, and on the Texans’ opening drive, he rushed six times for 37 yards as Houston went 85 yards down the field on 11 plays and scored a touchdown. Who scored for the Texans? I’ll give you one guess.

Earlier this week, legendary Hall of Fame quarterback Len Dawson passed away at 87. The former No. 5 overall pick was a Super Bowl champion, Super Bowl MVP, NFL Man of the Year and a Chiefs legend. To open up the Chiefs’ Thursday night preseason matchup, Patrick Mahomes took the field and lined his offense up in the famous “choir huddle” to honor Dawson.

After the delay of game penalty, which was declined by the Packers, Mahomes trotted off the field.